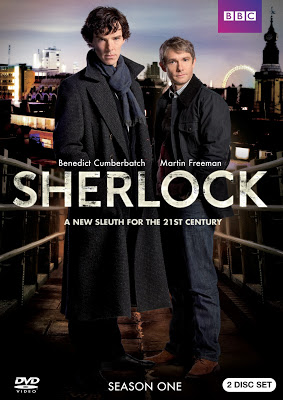 The Pitch
A contemporary take on the classic Arthur Conan Doyle stories, Sherlock is a thrilling, funny, fast-paced adventure series set in present-day London. Co-created by Steven Moffat (Doctor Who, Coupling) and Mark Gatiss, Sherlock stars BAFTA-nominee Benedict Cumberbatch (Hawking, Amazing Grace) as the new Sherlock Holmes and Martin Freeman (The Office, Love Actually), as his loyal friend, Doctor John Watson. Rupert Graves plays Inspector Lestrade. The iconic details from Conan Doyle’s original books remain – they live at the same address, have the same names and, somewhere out there, Moriarty is waiting for them. And so across three thrilling, scary, action-packed and highly modern-day adventures, Sherlock and John navigate a maze of cryptic clues and lethal killers to get at the truth.

The Review
A contemporary reimagining by Steven Moffat and Mark Gatiss, Sherlock succeeds by being not only faithful to the original Doyle work, but also by seamlessly placing the characters into a modern context completely intact.  Watson, a Afghanistan war vet chronicles his adventures with Holmes through a blog, and Holmes, doesn’t rely on modern technology, rather sticking to his powers of observation and deduction (and the occassional text).

The first season is comprised of three ninety minute episodes (more akin to television movies) including an updating of A Study in Scarlett.  Also updated for the series are such familiar characters as Inspector Lestrade, Mrs. Hudson, Mycroft Holmes and arch nemesis Moriarty appears in time to set himself in place for a second season.


Sherlock is a success, in no small part to the performances of Cumberbatch, who plays the legendary detective with a brilliant command of his work and an Asperger’s syndrome like focus and social awkwardness and Freeman who portrays Watson with a twinkle in his eye and serves as a window for the audience into the world of Baker Street’s most famous detective.

Extras include commentaries, making of featurette and the original pilot episode in a 60 minute format.

Sherlock is tremendous fun and a must have for anyone who enjoys the classic novels or excellent television.  Highly recommended.