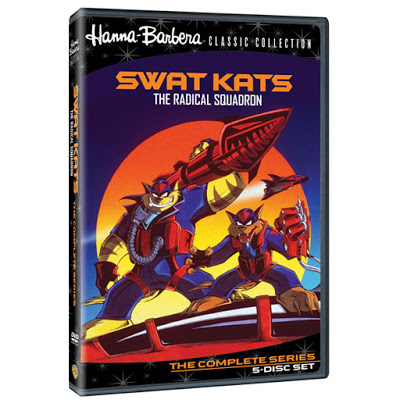 The Pitch
Deadly bacteria! Doomsday devices! Robotic spiders! Sound like a big budget sci-fi thriller? Nope. Even better. It’s the 5-Disc, 26-Episode Swat Kats: The Radical Squadron Complete Series Collection. Chance Furlong and Jake Clawson appear to be ordinary junkyard auto mechanics until trouble occurs in Megakat City. In a flash they fly their high-tech Turbokat toward danger as T-Bone and Razor: the Swat Kats. The city is run by the power-hungry Commander Feral and his militant team of Megakat Enforcers. Jake and Chance were once Enforcers but Feral demoted them to working in the scrap yard, where the Swat Kats were born. They take on any kind of menace from the undead sorcerer Pastmaster to lobster-like alien warlord Mutilor. The hardware-heavy action never stops in this animated fan-favorite from Hanna-Barbera Studios that’s fur-flying fun!

The Review
Having not seen Swat Kats previously, I was pleasantly surprised by the weirdness of the series, set in the brightly colored anthropomorphic city.  What really impressed me was how well constructed the series mythology was.  The heroes, the equipment, and most importantly the wide and varied rogue’s gallery all contributed to a fun, original series that didn’t feel indebted to any merchandising to make it work.  The entire series was directed by Robert Alvarez, and the show benefits from the singular point of view.  The voices are also great, with excellent work by such industry vets as Charlie Adler, Barry Gordon, Lori Alan, Jim Cummings, Mark Hamill, Tress MacNeille, Candi Milo, the legendary Gary Owens and the late, great Roddy McDowell.

Swat Kats is entertaining and a must have for fans of the series or animation fans in general.