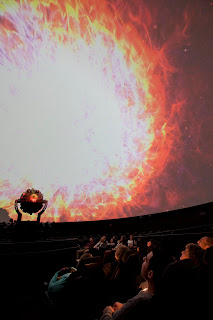 Above your head, the dome swathed in fuchsia dims to dark. Thousands of stars emerge and begin to faintly pulse. Poised in the round room’s center, a black, sinister, pod-like device awaits, ready to obliterate the audience.

You don’t have to surrender, nor take it to your leader. Instead of blasting away with laser beams, this rotating contraption comes in peace — taking viewers on an impressively-synchronized cosmic trip from own solar system, through the Milky Way and way, way, beyond (dude).

An ordinary planetarium usually projects a night sky from an earthling’s point of view. The Starmaster can simulate up to 9,100 stars, from any location in space, and from any time 10,000 years in the past or future. AND they flicker. (Boston is fortunate: it’s only one of only two such simulators in the country.) 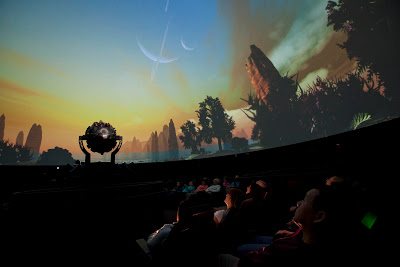 Once a brief “preshow” is over, “Undiscovered Worlds” begins its fly-through in search of “exoplanets” — planets outside our solar system – particularly the habitable ones. As if standing on the bridge of the Enterprise, the audience rockets past stars named 51 Pegasi, through wispy gas and dust clouds and across the surface of fiery suns, whose appearance is half-fantasy, half based on data from NASA’s Kepler space observatory.

“This is the planet Corot 7b, discovered in 2009,” the narrator intones, reading the somber script by MIT’s Alan Lightman, author of “Einstein’s Dreams,” as we soar across a CG volcanic landscape straight out of Mordor. “On this extreme world, rock melts on the surface. It is a place lethal to human life.” The Museum smartly used other homegrown talent. Actress Debra Wise narrated, and Harvard and MIT Astrophysicists Lisa Kaltenegger, David Charbonneau served as advisors (and occasional narrators). The jaunty soundtrack was composed by Berklee professor Sheldon Mirowitz; its triumphant horns and angelic harps transports you right into a lost “Star Trek” episode.

“Undiscovered Worlds” is a tricky cosmic slingshot ride, both bombastic and informational, hovering in a cloudy zone equal parts inspiration, science and spectacle. You leave feeling expansive, yet small. And part of you still might miss “Dark Side of Moon.”

Ethan Gilsdorf is the author of the award-winning, “Fantasy Freaks and Gaming Geeks: An Epic Quest for Reality Among Role Players, Online Gamers, and Other Dwellers of Imaginary Realms,” his travel memoir/pop culture investigation into fantasy and gaming subcultures that the Huffington Post calls “part personal odyssey, part medieval mid-life crisis, and part wide-ranging survey of all things freaky and geeky.” National Public Radio described the book as “Lord of the Rings meets Jack Kerouac’s On the Road” and Wired.com proclaimed, “For anyone who has ever spent time within imaginary realms, the book will speak volumes.” Follow Ethan’s adventures at https://www.fantasyfreaksbook.com.