Former daredevil Vic Boone is a private investigator in a world etched by the science fiction of drive-in movies and early Hollywood. It’s a landscape of robots, ray guns, and regular Joes. But whether his client is a beautiful socialite or a brain that wouldn’t die, Boone is out to get the job done no matter how bizarre.

How would you describe Vic Boone?

It’s a blend of B-movie/early Hollywood science fiction and pulp detective novels with a some humor mixed in.

What was the genesis for the book and how is this version different than the original Zuda strip?

It’s been a long strange trip for the book since Zuda.

After it lost, I put it on shelf for a bit to focus on how to proceed with the work. I knew I wanted the book out there and good number of people seemed to enjoy what they saw on Zuda.

I emailed countless publishers, though with only 8 pages to show I knew that it was wishful thinking for the book to get picked up by anyone. 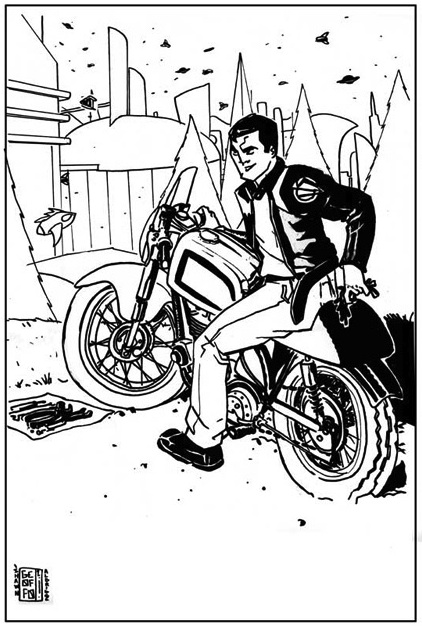 I guess the biggest difference between the new version and what was on Zuda is the look. A new artist is of course going to mean a new style, but here it goes a little further.

Geoffo suggested a few approaches to the colors to better suit his style. I took his suggestions and rolled with it. Where before Boone was colored traditionally, now it’s a little more experimental — a very limited palette and each scene gets it’s own approach. I’ve heard it described as pop arty. 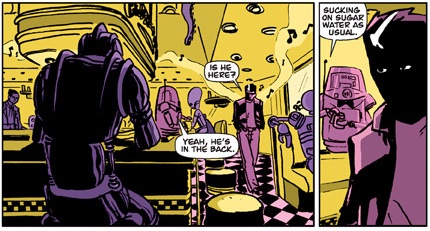 Oh, and Boone has a white streak in his hair now.

Beyond the art, not much else has changed. I mean, I hope I’m a better writer now, but the feel of the book has remained the same.

I’ve probably said this a million times, but the biggest influence on this particular book is my Uncle Paul. Growing up I would sit and watch countless hours of old sci-fi films with him.

If there was anything that even hinted at being science fiction or fantasy, we were going to watch it. He’s also the one who got me into reading comics.

Outside of him, my main influences for this particular series are Chester Himes, Graham Greene, Dashell Hammett, and so many more. Comic book influences really too numerous to name, but a few would be Alex Toth, Alex Raymond, and Gerry Conway.

You are releasing this both digitally and in print. What are the storytelling challenges with each medium?

I’m not sure I’ve come across any. Truth be told, I just write the book as print publication. Most of the apps and other means of digital distribution seem to handle “straight” pages pretty well. Of course, there are those that zoom and zip around the page, which I wish I had more time to explore as a tool.

How did you start working with artist Geoffo, and what unique stylist or storytelling skills do you think he brought to the project?

I met Geoffo via the internet.

He answered a call I had put out looking for an artist. I’m lucky I found him (or he found me.) Geoffo brings a really different perspective to the project. His influences are from a different place than mine, namely France (laughing).

From a storytelling perspective, he brings a good sense of pace and panel layout. He’ll add a panel here and there, which always makes the page a little better paced. His design work is really superb, too.

The look he gave the Boone’s environment and the surrounding characters fits the book so well. The vibe it has is pretty much what I had always envisioned.

He’s also the one who suggested the white streak in Boone’s hair.

For selfish reasons I want the book to succeed. Not for money, but because this is the book/character I want to be writing. For me, this isn’t a stepping stone to bigger and better things. I’m not writing Boone so I can write Batman. I’m writing Boone, because it’s a labor of love. I think if readers give it a chance, they might enjoy reading it as much as I enjoy writing it.

Vic Boone is solicited on page 316in the April Previews (Order code is APR111200) and arrives in comic stores in June from 215ink or is available for digital download via Wowio.