America is a lost nation. When an epidemic of vampirism strikes, humans find themselves on the run from vicious, feral beasts. Cities are tombs and survivors cling together in rural pockets, fearful of nightfall. When his family is slaughtered, young Martin (Gossip Girl‘s Connor Paolo) is taken under the wing of a grizzled, wayward hunter (In the Cut‘s Nick Damici) whose new prey are the undead.
Simply known as Mister, the vampire stalker takes Martin on a journey through the locked-down towns of America’s heartland, searching for a better place while taking down any bloodsuckers that cross their path. Along the way they recruit fellow travellers, including a nun (Kelly McGillis) who is caught in a crisis of faith when her followers turn into ravenous beasts. This ragtag family unit cautiously moves north, avoiding major thoroughfares that have been seized by The Brethren, a fundamentalist militia headed by Jebedia Loven (Tony award-winning actor Michael Cerveris) that interprets the plague as the Lord’s work.
Director Jim Mickle first grabbed the attention of horror film fans with his zombie-rat thriller Mulberry Street, in which Damici also starred and served as co-writer. They have teamed up again to deliver an even darker and bloodier shocker. Drawing on the post-apocalyptic frenzy described by Richard Matheson (author of the novel I Am Legend) and George Romero, Stake Land is a road movie with fangs and  a phantasmagoric journey.
Stake Land also stars horror movie icon Danielle Harris (Hatchet II) and was produced by indie horror producer-writer-director Larry Fessenden (The Last Winter). 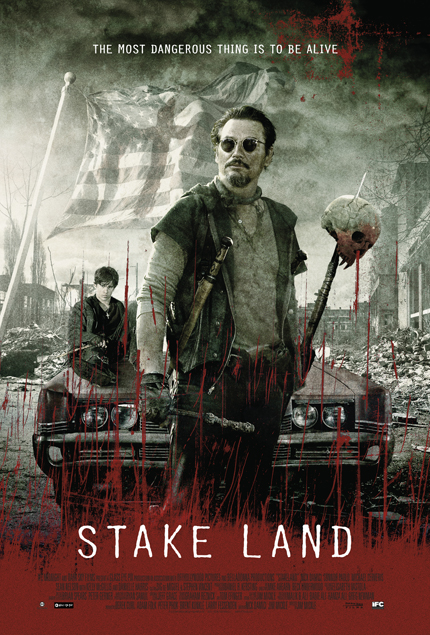