It’s hard to believe that the last episode of this season of Archer is here.  It’s the best show on television and if you aren’t watching it then at least you have the season finale to see what you are missing.

“Double Trouble” has secret agent Sterling Archer getting to know former KGB agent Katya Kazanova who had saved him from being shot to death in the previous episode. 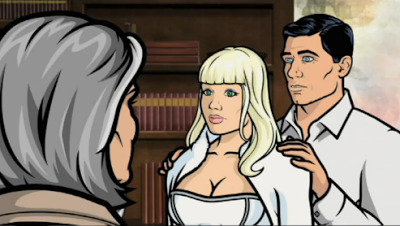 Now Archer is back home with the beautiful vixen much to the chagrin of his overbearing mother/head of ISIS/boss Malory Archer (voiced by the incredible Jessica Walter).

So what else can fans expect from the episode and the future of Archer (which just got picked up for its third season)? I reached out to series creator Adam Reed to find out the answer to those questions and more.

As we got on the phone and started chatting Adam revealed that he had just gotten back from vacation and was already back “to the grind”.

When I asked if that included work on Season 3 he replied that this was so. “I’m writing. (The team) is writing. The goal is (FX) is going to air three episodes after Always Sunny In Philadelphia this fall and then the full season will start in January as it usually does. So we are getting cracking on this episodes that will air after Always Sunny. We’re still working on the details but it looks to be a three episode mini-arc.” Adam went to say that thirteen episodes would air starting in January, bringing the total number of episodes in Season Three to be sixteen. 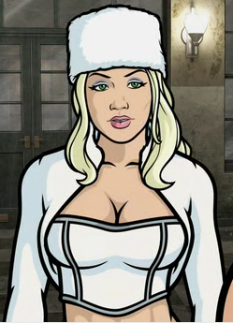 With the introduction of ex-KGB spy Katya Kazanova I was wondering if she was the perfect woman for Archer or was he just getting “soft.” Adam replied, “I don’t think Archer is getting soft. Katya’s just perfect for him. She’s incredibly good looking, exotic, great at Krav Maga, can shoot guns, and his Mom hates her. So that’s the total package for him.

While Adam didn’t want to give away any spoilers on the episode he did say that is is an, “Explosive finale. I think it’s a really good episode. It’s one of the rare times that Archer is not acting like a total douche bag the whole time. Katya brings out some qualities in him that are rarely, if ever, seen. I think it’s pretty fun to see Archer at least trying to be a good guy for once.”

He continued, “I think it’s a good episode to end on. These last two episodes (Double Trouble and the episode prior White Nights) were actually originally going to be the first two episodes. Because new viewers were hopefully coming to watch Season Two it would have been a little jarring because Archer would’ve been a pretty nice guy and we thought that might have been a bit off-putting. That people would think, “This is a show about a nice guy.” Which he’s not. So we put these two at the end so Archer could be his normal self.”

With Season Two now wrapping up I asked Adam to look back and give his thoughts on the past season. “I liked it a lot,” he said. “My favorite thing about it was there were some episodes were we delved into the back-story of different characters. They were the most fun to write cause you get to learn about these weirdoes that work at ISIS. Hopefully it blended with ISIS as a whole, you still get an exciting mission but you also get to learn about the background of these kooks.”

Being a fan of the show since day one I had noticed this season that Archer was a tiny bit less silly than it had been in Season One. I didn’t know if this was by accident, on purpose, or if it was just me. Adam told me, “Maybe it’s you (laugh).”

He then continued, “I think you might be right and I think a part of that is we’re learning that our favorite episodes are becoming the ones where it would appear that they are a bit more dramatic or the subject matter is a bit more serious. This way the character still get to be goofballs within what appear to be a more serious framework, like Archer having cancer for two episodes. But (being more serious) wasn’t a conscious decision on my part, cause I just sit down and start typing with no plan.

I finished with asking about the lack of a Blu-ray release for Archer Season One, something that Adam had heard about but didn’t have an answer on why there was none made. He did note that, “(FX) might be thinking about making Blu-rays for season two but that decision is so above and beyond what I do.

Archer‘s season finale airs Thursday, April 21st at 10PM on FX.
Ryan McLelland has written for the best of the movies and comics journalism before landing at Forces Of Geek for his dream column. Ryan’s comic work has graced comic shelves with GRUNTS: WAR STORIES, Arcana’s PHILLY, and THE SENTINELS ANTHOLOGY. He rarely updates his blog but when he does it can be read at www.eyewannabe.com and his “weekly” webcomic RETALES can be found at www.drunkduck.com/Retales.