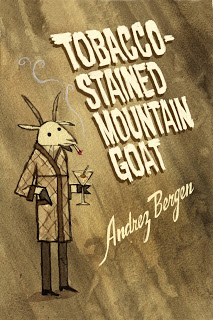 Full disclosure: Andrez Bergen is a columnist for Forces of Geek.

In the future according to Andrez Bergen’s Tobacco-Stained Mountain Goat, Melbourne, Australia is the last holdout for humanity. While it’s rich thrive in the city’s futuristic Dome, it’s poor struggle in the outskirts against the double threat of poverty and paranoid overlords. Stuck in the middle is Floyd Maquina, a flatfoot with a perpetual drink in hand and dame or two to kill for.

Floyd is a Seeker, a bounty hunter of sorts employed by Melbourne’s questionable government to find, apprehend and, if necessary, terminate citizens they consider to be Deviants. These Deviants are never explicitly defined; neither is The Catastrophe that got this bizarro, future-noir yarn rolling.

Constantly questioning his role at the end of the world, Floyd quickly finds himself stuck in the middle of a story that’s a delicious bit of Chinatown 1930s wrapped around a Blade Runner future with a dash of post 9/11 paranoia for good measure. Double- and triple-dealings lurk around every corner and for every twist and turn there’s a wisecrack and a nod to the gumshoes of Hollywood’s yesteryear.

There’s the botched assignment that haunts his nightmares and drives up his astronomical bar tab. The femme fatale. The suspicious workings of the powers that be and the foreboding, ever-presence of a corporation that seems to have its hands in a little bit of everything. The best part? Floyd recognizes the similarity between his own situations the lives of the P.I.’s from the silver screen.

Narrated by Floyd, a self-described cinephile, the book is playfully—and more important tastefully—written in the reference-packed language of the film geek. The pop culture shout-outs come at you early and often and should one go over your head, Bergen has been so kind as to include a complete glossary of film references and slang at the back.

When Bergen isn’t riffing on genres he’s taking frequent swings at the world we live in. Whether he’s shining a light on the gross imbalance between classes in an economic crisis or amplifying our obsession with cosmetic perfection to gaudy extremes, Bergen’s punches land frighteningly close to home.

However when the story shifts from exciting genre mash-up to spotlight hogging commentary during the book’s second half, things lose a bit of steam. Floyd’s whip-crack narration suddenly takes a back seat to a very specific examination of media manipulation and for several chapters the books runs the risk of losing sight of what it does best. Thankfully the end justifies the means, but when he’s firing on all cylinders, Bergen’s critiques work more seamlessly with his characters and setting.

Cleverly combining the gun toting flatfoots—flatfeet?—of the Silver Screen’s past with the paranoid futures of Philip K. Dick and William Gibson, Bergen delivers a gripping mystery that’s as informed by our popular and contemporary cultures as it is weary of where they might be taking us. Funny, action packed and keeping you guessing until it’s final pages, Tobacco-Stained Mountain Goat hits you like a stiff drink. Once you’ve tossed it back, you’ll be jonesin’ for the next round.