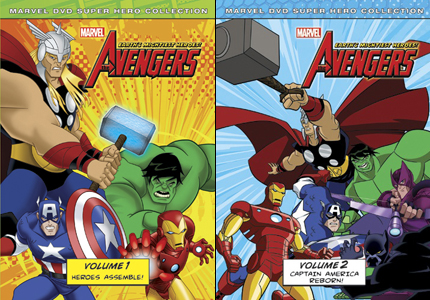 The Pitch
Featuring your favorite animated Super Heroes – Iron Man, Thor, Captain America, and The Hulk – The Avengers: Earth’s Mightiest Heroes! sees planet Earth threatened by Super Villains, time traveling conquerors, alien invaders, mythical beasts and rampaging robots — all bent on the total destruction of humanity. Unfortunately against these impossible odds, no individual hero has the power to save the world and just when all appears to be hopeless, the most skilled champions in the Marvel universe join forces to form the mightiest Super Hero team in history. The Avengers come to the rescue when the fate of the world rests on their shoulders.


The Review
As a super-hero fan, I usually at least check out any adaptation, and unfortunately, most Marvel animated series are pretty poor (There are a few exceptions, notably Spectacular Spider-Man and Wolverine and The X-Men), which makes me extremely happy that Avengers: Earth’s Mightiest Heroes! is a joy to watch and ridiculously well-executed.

The two discs (Part 1 features season 1 episodes 1-7 and Part 2 features 8-13 of the first season) encompass an animated cohesive Marvel Universe that has never been executed before.  Granted, the characters used are the ones available under the Marvel Studios banner (which means no Spider-Man, X-Men or Fantastic Four), but nevertheless, there are literally dozens of Marvel Comics characters making appearances within.

The first five episodes are actually a prequel to the series, each of which focusing on a single character (Iron Man, Thor, Hulk, Captain America, and Ant Man & Wasp) before the team assembles in episodes six and seven, creating the Avengers team.  Other Marvel mainstays making notable appearances are Black Widow, Nick Fury, S.H.I.E.L.D., Black Panther, HYDRA, and Hawkeye.

Characterization is top notch and the voice work is also great, with Robert Downey Jr. and Gwyneth Paltrow sound-a-likes as Tony Stark and Pepper Potts.  Although the animation is acceptable, strong writing is the focus here.  Despite being broadcast in traditional episodes, the series works much better as a whole, as it’s scope and story threads are integrated throughout.

Extras are slim, but include a look at Season 2 of the series.  My only other criticism is that I wish that the entire season was released in it’s entirety.

Avengers: Earth’s Mightiest Heroes! Vol. 1 & Vol. 2 is extremely entertaining and a must have for any Marvel fan.  Highly recommended.