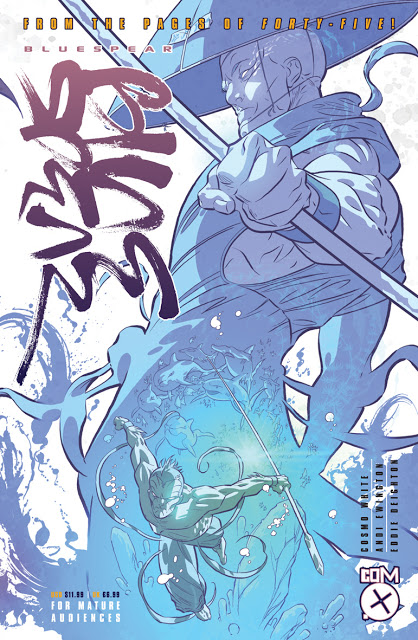 On Tuesday I had the opportunity to chat with Com.x’s Benjamin Shahrabani and Jon Sloan.

FOG!: What made you all want to work in comics in the first place?

AE: I guess the honest answer to this is, Eddie Deighton of Com.x. It was through our numerous coffee break excursions that Ed really opened my eyes to the comic world. I knew I had a book in me, but it wasn’t until our conversations strayed from the mundane routine of dodging the numerous smokers outside our office, to the hallowed ground of Kingdom Come and Marvels that I realised I had an outlet for it. Suddenly I couldn’t get enough of the medium, and with a fair amount of guidance from Ed, I began to familiarise myself with the industry.

ED: I’ve been an avid comic collector and reader since before I can remember; everything from Commando, through 2000AD to Marvel, Image, DC, etc. I never imagined I’d be involved in the publishing process myself, but I guess the desire had always been there in some form or another. I just love the medium; in some ways, you can be so restricted with the layout and structure, but in others you have the freedom to create anything your imagination can conjure. And from a publishing perspective, it’s one of the most cost-effective ways of getting your ideas and creations to the masses.


CW: Comics at their best are just so accommodating, democratic and engaging. They make it easy for anyone to tell a great story. And the threat of having to get a ‘real’ job is also a motivator…

FOG!: Who are each of your influences?


AE: Real life to a greater or lesser degree, 45 was inspired in no small part by my wife’s pregnancy and the subsequent birth of my son, Zack.

ED: There are lots of those for the different fields I’m involved in! As a graphic designer, I’d have to say Neville Brody. From a writing perspective, it would have to be Shane Black, Frank Darabont, David Mamet on the film side, and Warren Ellis, Mark Millar, Kurt Busiek on the comics; in no particular order, of course. Other, general, influences would have to be my college life-drawing tutor, Bill Randall, then Bill Sienkiewicz, Futura 2000, Ridley Scott and Orbital (the band) for various creative reasons! There you go, a little bit of a mixed bag for you, to show you what keeps me going.

FOG!: How did you break into the field?

AE: I sort of already touched upon this . As I said, I was fortunate enough that my boss for my day job also runs Com.x. This meant I had the perfect opportunity to pitch ideas to him. That’s not to say I had it easy – I had to work twice as hard to convince him I had a worthy tale to tell. Thankfully, he saw the potential in the idea enough to publish 45.


ED: Well, I guess I didn’t really ‘break’ into the field, more like I carved my own niche! I was fortunate in that I was able to establish my own publishing company with personal funding as an outlet for my own and other creators’ ideas. The establishment of the company stemmed from a passion for comics combined with a desire to try and evolve the medium; the industry was pretty stagnant at the time Com.x launched back in 2000 – we hoped to alter the public’s perception of what comics had become and also introduce a new, British company with a creative edge to the industry that would also be an outlet for new talent.


FOG!: Tell me about your collaboration, your process. How did you go about putting BlueSpear together?

CW: That’s one for Eddie & Andi, but for me, all the hard thinking goes into the thumbnails and layouts. Then it’s a process of stages of refinement.

AE: It was a fully collaborative experience; from the co-writing all the way through to Cosmo’s art. Eddie and I plotted out the story together. Once we had the framework in place, I fleshed out the story further and would hand what I had back to Ed to comment upon and develop. He would then take over the next portion of the story, write something, then pass it back. The entire process was organic and smooth.

Before we knew it, we had a finished first draft. The following weeks were spent refining dialogue and scenes, checking continuity, etc. Once we had a draft we were happy to show Cos, we passed it to him for comments and thumbnails. This was the stage where we would see first-hand if our words would translate visually. Sometimes Cosmo would come back with alternative suggestions to make a panel work better and we’d take onboard his comments and discuss accordingly. Once the final direction was agreed, Cos penciled, inked and coloured the pages. Eddie lettered and we worked on the design layout together.


FOG!: Tell me about the title character of your new book, BlueSpear. What is his background and what makes him different than other comic book heroes?

AE: BlueSpear was once a young boy called Yuji Tomikawa who drowned while boating with his brother Akira, off the shores of Funakoshi Bay, Japan. I don’t want to say how, exactly, Yuji became BlueSpear, as this is revealed in the opening few pages of the one-shot.

Over time, BlueSpear becomes a hero to the people of Tokyo; a force of light that strives to protect the innocent. What makes him interesting is the depth of the character; he’s by no means perfect – he has a strained relationship with Akira who, to this day, still blames himself for what happened to older brother when they were children.

Also, BlueSpear is a constantly evolving hero whose powers are only limited by our (the writers’) imagination. He is so devoted to his cause that he struggles to retain the ‘Norman’ part of himself. I’m pretty sure Akira would sum it as this; ‘For what is my loss, is Tokyo’s gain…’

ED: He draws powers from the sea and aquatic life-forms, plus he controls a mysterious weapon of unknown origin so (excuse the pun) there’s an ocean of possibilities open to us as creators of this character and his development. When we discuss his potential, Andi and myself still haven’t reached the limit in terms of what he can do with his powers, which makes for great storytelling.


CW: His difference is his mutability; he could just as easily be in a ghost story or a hard-boiled detective thriller as a superhero tale. He’s cross-genre!

FOG!: What do you hope people take away from reading BlueSpear?

AE: I’d hope that the readers feel that some of the secrets within 45 are being finally answered, also that they better understand how XoDOS handle themselves, and how cool BlueSpear is in action!

CW: I hope they leave the story hungry to find out lots more about the characters and the world they inhabit.

ED: I’m hoping that they’ll see how good Andi is at ‘proper’ sequential story prose, as a contrast to the transcript style he introduced in 45. I also want them to have a blast with the character, the art and the story and want to immerse themselves further in the 45 world. We have some very cool stories and arcs we want to tell, so I’ll be really happy if they enjoy this first one-shot we’re producing and want to come back for more.

FOG!:  What would you like to do with the character of BlueSpear in the future?


CW: Another one for Eddie and Andi, but from an art point of view, I’d like to see him in lots of different environments, and see how he reacts.


ED: I’d love to expand on the N-NRA and O-RYO story that we reference in the original interview with Akira, so that it fills in an additional part of his back-story; I have loads more ideas for powers we can introduce for the character in that one.

I’d also love to do a huge, Manga-inspired event where he battles it out with an eff-off Gargantuan that’s threatening to total the city. A Super-S against a gargantuan. Yeah, that works for me…

And let’s not forget the integral role he plays in the finale of the 45 story-arc!

AE: I think I’d personally like to develop more of the origin story for the actual ‘Spear’ itself, Ed and I have already discussed a range of possible scenarios, there’s plenty of scope to take BlueSpear almost anywhere we want to.

FOG!: What is next on the horizon for each of you?

AE: Book 2 in this miniseries/trilogy! The story is going to be another collaborative effort with Eddie but with the addition of Rob Patey to give it that slightly disturbed slant (Sorry Rob!), Lee Carter is stepping up to the plate for art duties. The book’s written and is with Lee as I type this. I can’t wait to start the whole process again.

I’m also working on Post-Mort’Em, which I created a while ago. It’s non-45 and very different.

ED: I’ve got lots of hats on at the moment – Post Mort’Em is next off the co-writing block, then Andi and myself will work on SkyLine, the third part of this first 45 trilogy.

We’re relocating both the Com.x UK studio and my design agency some time in July, so I’m coordinating that as well. I’m also producing a live-action short film with a great team of people and there are some other interesting film-related projects on the boil.

Also, we still have other titles we’re prepping for publication. After BlueSpear we have Duppy’78 by Casey Seijas, Amancay Nahuelpan and Daniel Warner; Monster Myths by John Lupo Avanti; Babble by Lee Robson and Bryan Coyle.

Following that, we have Nicodemus Flynn by Alex De-Gruchy, Robin Simon Ng, Robert Denton III and Amador Cisneros Jr, and Bushido Wasabi by Alex Rodrik and Stefano Cardoselli, to name but a few.

So you could say it’s going to be a pretty busy year for me!

CW: Not sure what’s next, but I look forward to finding out!

For more details on BlueSpear or Com.x, visit their official site HERE!