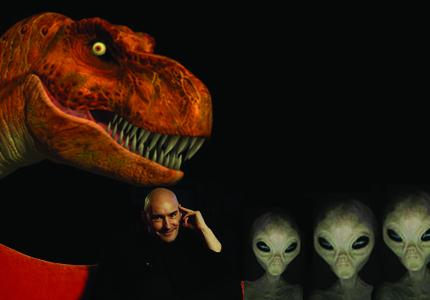 According to Deadline, Grant Morrison will write both a graphic novel and screenplay for Dominion: Dinosaurs Versus Aliens.


The project is based on a concept created by Barry Sonnenfeld, who will direct the film after completing his work on Men in Black III.  “Growing up, my fascination was all things dinosaur, and as an adult, I’ve had some success making films about aliens, so this is a dream come true.”

Liquid Comics will publish the book in both print and digital formats, with Morrison’s 18 Days collaborator, Mukesh Singh, handling the art chores.  Arnold Rifkin will co-produce the film under his Cheyenne Enterprises banner.

According to the report, “The graphic novel will chronicle a secret prehistoric world war battle. When an alien invasion attacks Earth in the age of the dinosaurs, the planet’s only hope is the giants that roam the planet with, it turns out, a lot more intelligence than previously realized.”