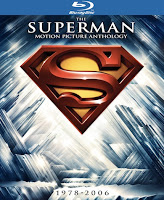 Warner Bros. Home Video / Released 6/7/11
Also available On Demand and for download through online retailers including iTunes and Amazon on Demand.

Cinegeeks have something to savor over with the release of Superman: The Motion Picture Anthology.

Although the box indicates the inclusion of material from 28 years, the set actually is far more comprehensive, and covers 65 years of material.

The set begins with Superman: The Movie, available in both the theatrical and expanded editions.  Not only is this one of my favorite films, but it also is the gold standard that most comic book movies are compared to.  Despite the showmanship of the producers, director Richard Donner used his own mantra:  “verisimilitude” to guide this project and it shows.   Christopher Reeve was and continues to be my definitive Superman, but also the only actor who has successfully made a higher pitch voice, a slouch and a pair of eyeglasses a believable disguise.  The film is a bit dated at time, but the script by Tom Mankiewicz (rewriting the highly publicized Mario Puzo) takes the character and his world seriously.

The movie was billed with the tagline,”You Will Believe a Man Can Fly,” which was ridiculously accurate, as Reeve’s flights were not only believable, but essentially unbelievable as a result.  The cast is equally unbelievable with an ensemble that included Marlon Brando, Gene Hackman, Margot Kidder, Terrance Stamp, Glenn Ford, Jackie Cooper, Marc McClure, Ned Beatty, Valerie Perrine and Susannah York.

Elevated by an iconic score by John Williams, Superman: The Movie is magical and is filled with charm, wit, excitement and delight.  Highly recommended.

Superman II is another story.  The theatrical release was filmed simultaneously as the first film until Donner fell behind and began to focus entirely on the filming of Superman: The Movie.  Despite having filmed approximately 70% of the film, tensions between Donner and the producers, the Salkinds, resulted in his dismissal.  Director Richard Lester, who had worked with the Salkinds before, took over the directing reigns.  To be honest, I loved Superman II as a kid, but find it has aged far worse than Superman: The Movie.

The British Lester, unfortunately was unfamiliar enough with America, that his footage of Zod and his cohorts terrorizing a small town feels like a gross caricature.  The theatrical version of Superman II does have it’s moments, but apparently all of them come from Donner, resulting in a far from fluid final product.  That being said, the Donner cut is equally a mess, and although it restores footage of Brando and some scenes with Hackman, the ending was spliced off of the first film and reinstated here (to be fair the original ending of Superman: The Movie was never completely solved and when Donner decided to focus on just completing that film, he and Tom Mankiewicz just moved the ending over).  Superman II, is a valid sequel and the good outweighs the bad, with the added bonus of Terrance Stamp as General Zod and a phenomenal fight sequence between Superman, Zod and his allies Ursa (Sarah Douglas) and Non (Jack O’Halloran).  Recommended.

Superman III, is like visiting an old friend and realizing that you have little in common with them anymore.  With Donner no longer at the helm, fully replaced by Lester, this picture devolved into comedy and camp with Richard Pryor playing a computer genius that teams with Robert Vaughan to combat the Man of Steel.  Pryor’s casting isn’t much of a surprise when you consider his box office clout at the time (similarly, another box comedian Eddie Murphy almost starred in Star Trek IV).  Annette O’Toole plays Clark’s teenage sweetheart, Lana Lang, and the film does have a really fun sequence when Superman (thanks to synthetic Kryptonite) turns into two versions of himself, one good and one evil and they fight one another in a junkyard.  Much of Pryor’s role in the plot is to steal fractions of a cent from bank accounts, a genius plot recycled for Office Space.  Lester’s Superman is tragically misguided.  But, it couldn’t get much worse, could it?

Superman III is Citizen Kane next to the abomination that is Superman IV: The Quest For Peace.

At this point, the Salkinds, burned by the reception of Superman III, sold their rights to Cannon Films, which didn’t have the budget needed to complete the film as planned.  Based on an idea by Christopher Reeve which had Superman ridding the world of nuclear weapons, the final product was a mess.  Not even the welcome return of Hackman in a small part as Luthor did much.  In the film, Hackman and his nephew, Lenny Luthor (Jon Cryer) clone Superman, which results in the blond Nuclear Man.  There’s fighting.  Really, really bad effects.  An awful film all around.

The franchise lay dormant as producers, screenwriters, directors and stars were hired and fired as development deals came and went.  Finally, Bryan Singer, the director of the first two X-Men films and The Usual Suspects signed on to bring Superman back to the silver screen, in the 2006, Superman Returns.

The resulting film is a culmination of bad decisions.  It is not a bad film, but rather a dull and disappointing one.  Using John Williams’ iconic theme, footage of Brando as Jor-El and several key elements of production design, Singer’s reverence to the Donner material never allows him to make his own mark.

Unknown Brandon Routh, who is very reminiscent of Reeve (their voices are eerily similar) wears the tights as Superman returns home after leaving Earth to explore deep space searching for any remnants of Krypton (some of this footage appears on the Blu-ray for the first time and should have been in the film).  In his (and Clark’s) absence, life goes on, especially for Lois Lane, now a single parent and Pulitzer prize winner for her article, “Why the World Doesn’t Need Superman.”

Superman’s absence also prevented in his testifying against Luthor (Kevin Spacey, channeling Hackman), which resulted in his release.  Once again, Luthor’s focus is real estate and using the crystals found in the Fortress of Solitude, he plans to create a Kryptonian landscape covered in soot to rule the world (not really sure how this was going to happen).  By the end of the film, Luthor is stuck on an island, Superman has been stabbed with a Kryptonite shiv, died and resurrected, and Lois’ son is revealed to have super powers.

That being said, if we are to assume that only aspects of the Donner continuity exist, Superman did sleep with Lois as he did in Superman II, impregnated her, kissed her to make her forget his true identity and then split town.  Singer might also be trying to play up the Jesus connected, claiming immaculate conception, but the second that kid pushes a piano across the room into a thug, that doesn’t work any more.

Singer is an extremely talented filmmaker, but unfortunately worked too hard at staying true to Donner’s interpretation, rather than developing his own.  The film isn’t particularly exciting, but there are several inspired sequences that allude to what could have been, which makes it all the more disappointing.

The anthology also includes all of the Fleischer animated shorts and the George Reeves vehicle, Superman Vs. The Mole Men.

Packed to the gills, this Blu-ray set is a must have for any cinegeek or comic fan for the supplementary material alone, the fact that it includes a few watchable and the best comic book movie of all time is just icing on the cake.

For more details, check out the Official Site and Facebook Page.