It’s been a long time since I’ve posted, and I’m sorry for being “IncogNegro,” but I’ve been crazy busy with school and starting a new ventures.

As for school – it is now over.

I had a helluva year, learned a LOT about me and how horrid the NYC public educational system is (I’m writing a book about my experience), and just how DOOMED we are as a society.

I woke up with this song in my head…

A few weeks ago, I got the opportunity to interview FLAVOR FLAV! 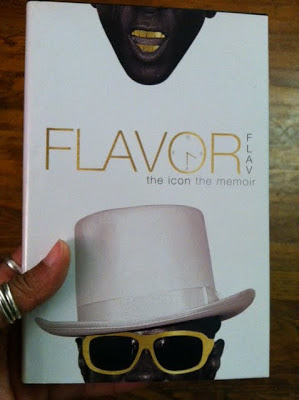 Okay, now about what lead up to the interview…

After I got the high sign from my Editor, Stefan Blitz – I contacted the publicist from the publisher and set up a day and time. Every other day, that dime and day was changed “due to Flav’s schedule.” The final day and time was set.

Flav is going to do a “book talk” at the Hue Man Book Store in Harlem at 6:00. I asked if I could have at least a half hour to talk with him – fifteen minutes was the LEAST amount of time I needed to get a decent interview.

“I can’t promise anything. The Publisher, Dr. Farah Gray will be there. Meet with him and set up what you need.”

So, I decided to go there an hour early and brought two friends with me, Ronald and David. They were both dying to see what was gonna happen. As I approached the store, I expected to see a long line of fans, lots of posters of the book jacket, balloons, loud music, you know – it’s 125th STREET…IN HARLEM! And Flav is a NEW YORKER!

But what did I see? NOTHING.

No balloons, no posters, no loud music, no people. I was gobsmacked!

I wandered in the store, and Ronald was waiting, drinking a smoothie from the stand in the store. After saying hello, I went to the store manager, introduced myself, explained why I was there, and asked to see the publisher. She asked, “Why would the publisher be coming here?”

I told her that I was told that he would be there, assuming that he was in charge of Flav’s press, since the publicist wasn’t going to be there. She said that nobody was there yet, and to just “Have a smoothie and wait.” By then, the time was 5:15. Then Dave showed up, also wondering why there weren’t any people there. He and Ronald were both as surprised as I was.

So, we all took a look around the store as time passed.

I asked the manager if she had heard from the publisher or Flav. She said no.

It was 6:00. A few people trickled in for smoothies. Ron, Dave and I made our way to the back of the store and waited.

There were about 25 people there.

It looked like there were at least two other groups with video cameras and pages of questions to interview Flav. I made sure that the manager knew I was press. She had a lot of flop sweat going on.

The manager is running around, people are getting twitchy, she begins to address the “crowd.”
“Hello everyone! I’m so glad you’re here at the Hue Man book store to see Flavor Flav today! Uh…while we’re waiting, let’s have a fun time quiz!” I don’t know what a “fun time quiz” is, but this woman asked some dumb questions, and we did not have any fun either.

Just then, I spot the publisher! I walked over to him, introduced myself (I had to explain who I was and that I talked to his publicist a few times), and asked where Flav was.

“Well, I don’t know! You know Flavor Flav, he’s a crazy guy! He’s been doing press ALL DAY and might be resting somewhere. I’m sure he’ll be here soon.”

So I sit down, tell Ron and Dave what happened, and we all laughed. And waited.

About 10 minutes later, we hear a commotion. Some people are yelling FLAVORRRRRRRRRR FLAAAAAAAAAAAV! and then we spot him. He’s dressed in white from head to toe, grinning, glad handing, gold fronts gleaming. The time now – 7:30.

He comes in, and apologizes profusely – “Sorry folks, I was up on 125th, getting some love from the peoples on the streets – naw’mean?” (what that really meant was that he peeped in here, saw that there were a handful of folks, and then went on the street to grab people to get them in the store to buy his books!), and then starts talking. Talking, talking, and talking!

“Well, Chuck D really wrote that song. The best response I ever got about the record is that single “Fight The Power” is being rated the best Rap single of all time. That’s the BEST response I ever got. I’m just honored man, but yo, and Spike Lee did his thing with that in the movie…with Radio Raheem, walking around with the BOOM BOX! Yo, the first time I heard my voice in the movie, it was beautiful! Ahhh HAAAAAA HAAAAAAAA! NAW’MEAN?”

He took questions from the small crowd. Old friends came through. I looked at my watch and it was after 9:00.

Here’s and iPhone clip of what he said about the infamous fight between the ho’s – uh, I mean women ‘New York’ and ‘Pumpkin’ (Pumpkin spit on New York, remember?) on his HIT SHOW, ‘Flavor Of Love.” (sorry for the audio being so low)

Then the book store manager yelled,”OKAY EVERYONE. THE STORE HAS BEEN CLOSED FOR OVER AN HOUR. IT IS TIME TO BUY YOUR BOOK AND GET MR. FLAVOR TO AUTOGRAPH IT. THEN YOU MUST LEAVE, I GOTTA GO HOME.”

So then everyone queued up, got their book, and got in line. My friend Ronald got his book signed. Flav sometimes took phone calls from his kids and his mother while signing books. Here he is, ordering some Popeye’s Chicken. No joke. 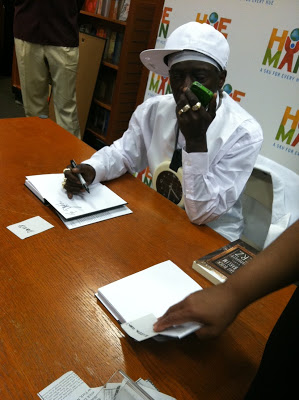 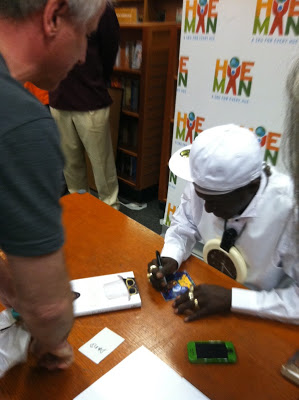 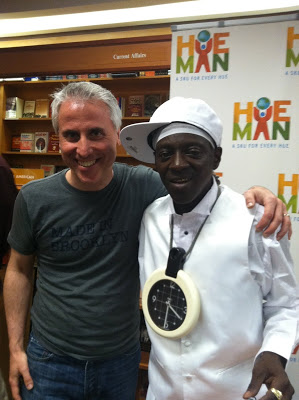 Then it was Dave’s turn! Dave said, “Hey Flav, I can’t wait to read your book, I’m looking forward to it!” Flav’s response – “Don’t worry, it won’t take you that long.”

Neither Dave or I really understood what that meant.

Then it was my turn. So, I walked up, told him my name, and he autographed my book! He asked me about my DJ gigs, and what it was like to be a “strong Black Female in the game.” 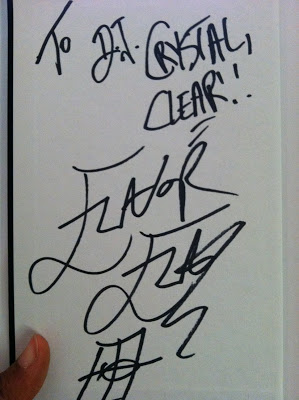 Then, I asked him to autograph one more thing. He said sure, and I reached into my purse and took out my FLAVOR FLAV ALARM CLOCK! 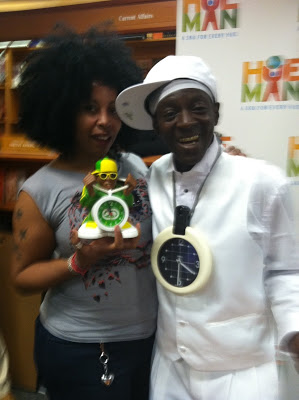 See that big grin on his face? You would have thought that I pulled the Holy Grail out of my purse. A hush fell over the crowd. DJ Chuck Chill Out was there, and asked if he could touch it. I told him no.
Flav was FREAKING OUT – “YOOOOOOOOO, where did you get this? I AIN’T EVEN GOT ONE OF THESE JOINTS! HOW DID YOU GET THIS?
WAAAAAAAAAAAAAAAAAAAAAAAAWWW!” 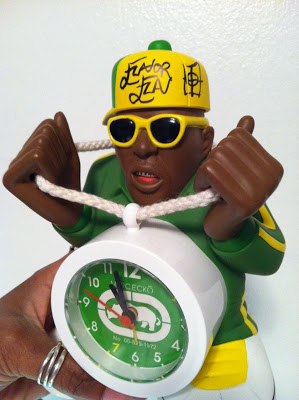 I explained that I bought it from Kid Robot for about $15. It’s a limited edition Marc Echo Flavor Flav alarm clock. I also have the other one in the red and black colorway. That one is in storage. Chuck Chill Out will never see or touch it.
So after ALL of that, and letting two other groups interview him after the manager kicked out the rest of the “crowd,” I finally got to ask him THREE fucking questions.

Question 1 – Public Enemy was a group who had a GREAT influence on Hip Hop with STRONG political views. Do you think that there is a group or person in the game right now who follows P.E’s lead?

ANSWER – “Not really, I can’t think of any. People think that because we got a Black President that shit is over, but it ain’t.”

Quesion 2 – You are a man who is loved by all, but especially by many, many women. Where do you get your “mojo” from?

ANSWER – “MOJO – what’s that?” (then I explained what it is) “Ooohhhhh, AH HAHAHAHA, well, Flav is a verile man, naw’mean? You know, the ladies LOVE me because I’m real, I keep it real, Naw’mean? You love me, right DJ Crystal Clear? AHHHH HAHAHAHAAAAAAAAAAAA! Give me a kiss!”

Question 3 – Flav – We all know that you can play 12 different instruments, and all of them well. What was the first song you learned how to play?

ANSWER – “The theme from BATMAN! Yo, I LOVED that song, yo. I played that joint on my Casio – YEEEEAAAAAHHHHH BOYEEEEEEEEEEEE!”

And with that, the store manager yelled at us all to leave. I looked at my watch. It was damn near 11:00.

In this article:Book News, Hip-Hop/Rap, Interview