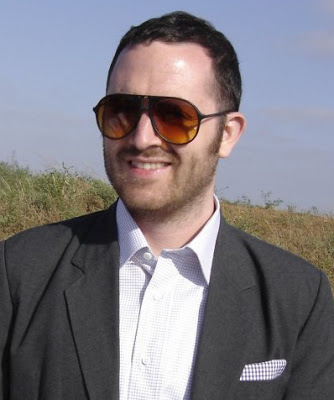 Ugly Americans is one of those shows that proves to be a successful “friend-test” for those looking to include some new people into their inner circle (friend-test: the use of an obsession-be it music, television, or movies-to verify that someone is worthy enough to be friends with). It is righteously funny, borderline sick, and has some of the oddest collection of peripheral characters ever assembled, and if those who want to be friends with me can’t enjoy it, then they can “Suck My Balls” (to quote the Manbirds in the show).

Having been a fan of the show since its inception, the opportunity to talk with creator Devin Clark was something of a personal coup d’etat (meaning: I didn’t have to kidnap him and force him to tell me the plot points of season two, I could merely ask him in a professional manner) and yes, I did happen to end the interview with a major crush because anyone who can create a world as bizarre and funny as Monster New York deserves my fanatic love.

After the break is the complete interview with Mr. Clark.

FOG!: Ugly Americans came about from the work you did for the Comedy Central Web Show 5-On which dealt with monsters and demons discussing important topics a’ la “Man on the Street” style interviews, at what point did you and executive producer David Stern drink enough beer to go ahead and create a full 30-minute show?

Devin: (laughing) It took quite a lot I won’t lie. Trying to hash out so many different and bizarre genres and packing them all into New York City was no easy feat and so many of these creatures have an insanely broad variety of mythologies. I mean there’s not just one way of approaching vampires anymore, we have some vampires that can’t go out in sunlight and now we have vampires that turn all glittery and sparkle in the sunlight.

I think one of the biggest challenges was trying to figure out what kind of mythologies we were going to adopt in incorporating all these crazy characters and then how we were going to balance that world as well as having a show that people could relate to. Having Mark Lilly kind of navigate this world was way we could get on board and understand this version of New York.

FOG!: When watching the first season I couldn’t help noticing the similarities between Ugly Americans and The Bob Newhart Show where Mark is basically surviving in a world of crazies like Newhart’s character Dr. Hartley and constantly getting screwed. Was Mark based on any specific TV psychologists or social workers or am I watching too much television?

Devin: David (Stern) was definitely influenced by that as well as cop/detective shows. For us it was important that, because we had this crazy world, Mark didn’t just exist as an entrance way into the show. In some TV shows and movies when they have to introduce the audience to this world, they use those characters as an empty shell, devoid of personality that all the craziness can be explained to and for us we really wanted Mark Lilly to be an anchor (for the show) and have a substantial personality as well as being this weird, quirky guy.

When we’re putting the stories together it’s crucial for us to base them around Mark’s attempt to do good and really help these people and having him as a social worker seemed like a perfect way to throw him in the mix and have him be responsible for integrating and fixing this wide variety of weird creatures.

And David’s dad was a social worker so he was able to draw from a wide array of bizarre stories from his past.

FOG!: What I like about the show so much is how complex the so-called “Monsters” are. Leonard may be a wizard but he is also a drunk who enjoys wet t-shirt contests, Twayne Boneraper is pure evil but he is also a Mama’s Boy, Callie is a Succubus who has a soul and Randall may be a zombie but he is also just a regular dude. Is it important to you to play with the monster stereotypes while breaking them as well?

Devin: Yeah, I mean the premise of the show kind of exists within each of those six main characters (Mark Lilly, Leonard Powers, Randall Skeffington, Callie Maggotbone, Twayne Boneraper and Frank Grimes) and it’s a fine balance between the specific monster that they are and their own quirky foibles and personalities that turn those traits on its head. Even though Twayne is theoretically this terrifying demon and CEO of the DOI (The Department of Integration) he’s often this total bumbling boob Mama’s boy and we take the opportunity to push both angles. 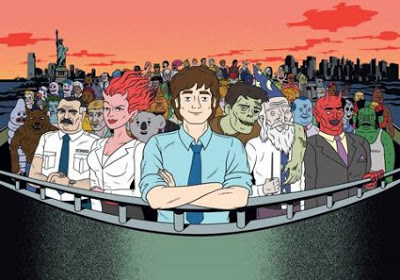 Obviously we are always looking for jokes and having these funny little quirky kinds of characters are going to affect these clichéd (monster) personas but we also like to delve into their personalities and find out why they are the way they are.

In the third episode that’s airing this season we explore Twayne’s past and find out he had all these siblings that he actually murdered as a baby. And these memories are kind of repressed and in attempt to help him work through them, Mark unleashes this terrifying creature.

I think we have a lot of fun balancing their potential, as both the monster personas and their somewhat human personas and there’s endless comedy that can be drawn out from these characters.

FOG!: The humor of the show is very dark and dry. What kind of reception have you experienced from critics and the audience when it comes to episodes like Kill Mark…Kill where Mark has to murder baby Leonards or Manbirds which is just insanely hilarious and crazy?

Devin: (laughing) one thing we are always wary of is losing perspective. I mean when you work, you know, twenty-four hours a day, seven days a week you lose all grip with reality and you can lose context in what might be a little too overboard and a little too violent so sometimes we welcome the network’s fresh perspective. They’ll be like, “Yeah, you may have gone a bit too far here”. At the end of the day we just want to make people laugh and not ostracize anyone by getting a little too dark or a little too gory. I think animation is so well suited for that because you can contextualize this craziness and this violence in a very funny way and you can make it absurd and so over-the-top that it’s not horrifying anymore so that you get laughs instead of shrieks .

For us, animation is the perfect vehicle for poking fun and incorporating the horror genre and the perfect context to pushing it to the extreme and making it funny.

FOG!: Speaking of extremes, after watching the episode Manbirds I spent the entire next day yelling “Suck My Balls” like I had Tourettes, it was horrible and I was horrible to be around.

Devin: (laughing) it’s ridiculous, an entire language based out of vulgarity and the funny thing about that is that it was based on the writers getting a kick out of that one little shot from the pilot episode where you see this creature poop on a guy and say “Suck My Balls” and the writers took that premise and just ran with it.

They were like “No, no, no that’s not just what he was saying in passing, that’s literally their language” and so I think they have fun going back and looking at some of the earlier episodes and these throwaway characters and background characters that we did just as a funny little visual gag and they say “Alright, this guy here whose hand is his head, we’re gonna figure out his whole back story and what his whole deal is.

It becomes a jumping off point for the writers to have fun and create this world and not just something that is poking fun of horror genres that already exist but building out Ugly Americans unto itself with its own unique creatures and its own mythology.

And the Manbirds were really an opportunity to do that. 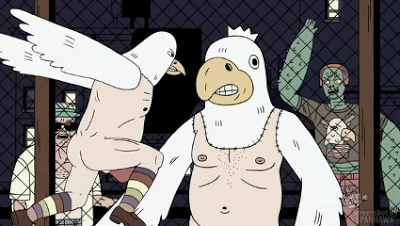 For instance,  the sheaths (the covering for their genitalia that flops around) that was a fun, legal way to work around the fact that we had an entire episode where creatures hit each other in the face with their penises.

There’s a scene in the museum where the sheath is shown as a covering to protect their genitals (and not their actual penises) which allowed us to get away with quite a bit.

FOG!: And it was brilliant.

FOG!: And finally, please, please tell me there’s going to be a Doug-Centered episode because I firmly believe that little koala is seriously messed up.

Devin:  You know, what’s so funny about Doug is that he was one of those background characters.  One of the board and animatics guys, just needed an extra body for the seat for the first counseling scene and he was like, “I’m gonna make a man with a koala body”. And people reacted to him so positively and he’s become a bigger and bigger presence.  So yes, I can tell you we delve into Doug’s background and we find out some very dark and disturbing things about his past, but I won’t spoil it for you. There’s a reason why he sheds a tear. There’s a lot of pain there.