These huge humanoids wandered wild, marginal places and wastelands and caused trouble when they encountered humans.

Nowadays, no one believes in trolls.

But they still haunt and inhabit Norway’s folkloric consciousness, a still-pristine landscape of woods, mountains, and fiord lands, largely as comic characters. Think of the dim-witted troll in the Norwegian tale “The Three Billy Goats Gruff,’’ easily tricked by the goats and the butt of jokes. 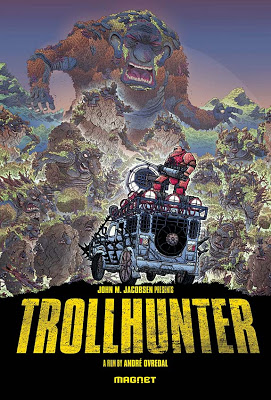 “Trollhunter,’’ which is currently in limited release, dusts off those fairy tales and updates them with a fresh, 21st-century coat of adventure and suspense — and ironic reality check.

Written and directed by Norwegian André Ovredal, “Trollhunter’’ shares the first-person-reportage feel of “The Blair Witch Project,’’ as well as the shaky-camera monster-movie vibe of “Cloverfield.’’ Ovredal’s vision also includes doses of Steven Spielberg’s effects-driven shock and awe, as well as that director’s prevailing mistrust of authority.

“I wanted to blend my love of ‘Indiana Jones’ with my love of trolls,’’ said Ovredal, 37, in Boston to promote his debut feature. Which explains why Hans the troll hunter wears a fedora.

As with “Blair Witch,’’ what the audience sees, ostensibly, is footage shot by students. There are three of them, investigating a series of bear killings in the wilds of Norway. They hope to interview the “poacher.’’

Finally agreeing to let the video crew follow him, the poacher is revealed to be Hans, a middle-aged, burned-out government employee working for the fictitious Troll Security Service (or TSS, an echo of the PST, Norway’s version of the CIA). His job: keep the troll population under control. Meanwhile, TSS bureaucrats devise bogus explanations — tornadoes, floods, bears — to explain any isolated troll-wrought damage or deaths.

The troll hunter is played by Norway’s most famous and controversial comedian, Otto Jespersen, known for his crass, dark sense of humor. Here, Jespersen doesn’t aim for laughs. The portrayal is straight. “There’s nothing heroic about what I do,’’ he deadpans to the wide-eyed college kids.

While the troll hunter is supposed to ensure Norwegians never learn that trolls exist, Hans eventually tires of the cover-up and lets the students document his methods. In doing so, “Trollhunter’’ manages to pay homage to Norway’s rich folklore and take jabs at government bureaucracy and politics. He complains he gets no overtime pay. After every killing, Hans must fill out a “Slayed Troll Form.’’ The current controversy over building electrical towers in Norway’s hinterlands is cleverly woven into the plot. Let’s just say those high-tension lines serve a purpose beyond bringing power to the people.

“Because Norway has such rugged landscapes, it’s not surprising that many of the creatures of their cultural lore are connected so deeply with the earth and its perils,’’ noted Sandra Hordis, a professor at Arcadia University, in Glenside, Pa., who specializes in medieval literature and folklore. “They are beings sprung from soil and stone, and have come to permeate much of the folklore of the region.’’ 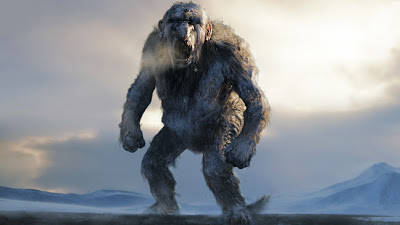 Trolls have given their names to natural features such as the rugged, dolomite formations called Trollholmsund and Trollstigen, a dramatic mountain road that translates as “Troll’s Ladder.’’

Ovredal, who is known in Norway as a director of commercials, and his special-effects team wanted their trolls to have idiosyncratic and distinct personalities. Their creatures aren’t the Hulk-like, Middle-earth trolls Peter Jackson brought to life, nor are they the cute, neon-haired dolls from the 1960s. 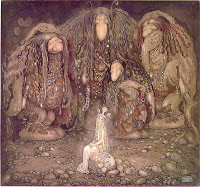 These trolls were inspired by “The Fairy Tales of Asbjornsen and Moe,’’ a book from the 1850s that Ovredal’s grandparents read to him as a boy.

“I never read ‘Lord of Rings’ and never played the game D&D [Dungeons & Dragons],’’ said Ovredal. “There was a missing, collective mythology I had to create.’’

Ovredal worked out a detailed “natural history of trolls’’ as fastidious as an entry in the D&D “Monster Manual.’’ His lexicon delineates four species: the one-armed “Ringlefinch,’’ the three-headed “Tosserlad,’’ the cave-dwelling “Mountain King,’’ and the massive “Jotnar.’’ All have oversize faces and bulbous noses. Norwegians know that sunlight turns trolls to stone. In Ovredal’s world, flashes of bright light also can make them explode. Here’s the scientific explanation: The UVB rays accelerate vitamin D and calcium production in their bodies, which either calcifies or detonates them.

In a nod to folklore, “Trollhunter’’ also includes a bridge scene reminiscent of “Three Billy Goats Gruff.’’ And just as in the “fee-fi-fo-fum’’ nursery rhyme, these trolls can smell Christian blood.

The director cut his teeth on Spielberg’s alien and fantasy films such as “Jaws,’’ “E.T.’’ and “Close Encounters of the Third Kind.’’ In those films, he said, “We have to figure out what is psychologically true in the fantastic.’’

But overall, “Trollhunter’’ is more skeptical than Spielbergian.

Ovredal likens his film more to “Man Bites Dog,’’ the Belgian mockumentary about a film crew following a serial killer. He didn’t want to make the “typical Norwegian socialist-realist film.’’ Like “The Host’’ for South Koreans, perhaps this overlooked Scandinavian nation needs its own monster movie.

“I hope they experience an adventure they have never seen before,’’ Ovredal said of US audiences. “A sense of humor that’s different. A monster they’ve never seen before. [And leave the theater] with a big smile on their face, and talk about it.’’

In this article:Fairy Tales, Interview, Movies/DVD, Written by Ethan Gilsdorf