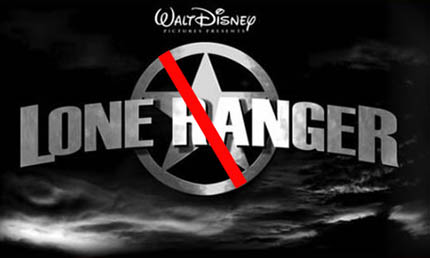 Deadline reports that Disney has pulled the plug on their Jerry Bruckheimer produced, Gore Verbinski directed Lone Ranger film which was to star Armie Hammer and Johnny Depp.

Concerns over the cost of the film (Budgeted at $235 million and rumored to cost up to $275 million, both of which are more than the $200 million that Disney wanted to spend) and the disappointing box office for Cowboys & Aliens are believed to be the primary causes for the halt in production.

This comes after other pricey ventures such as The Dark Tower,  At The Mountains Of Madness and Southpaw have been cancelled during pre-production, the result of escalating costs.

Despite plans for a humorous take on the material, concern for The Lone Ranger are also in no small part to the Western genre which has always struggled as tentpole material.

No word yet if Disney is willing to budge if the costs can get under control.  Despite my interest in the film, I’ve never really warmed up to the Verbinski-Depp Pirates of the Caribbean films and really can’t understand why the film could possibly cost so much.

What do you think?  Even at $200 million, do you have any interest in seeing The Lone Ranger?