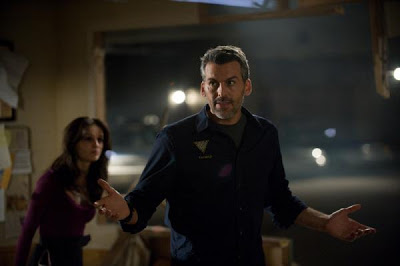 Israeli-born Oded Fehr first captured the attention of movie audiences in 1999 as Ardeth Bay in The Mummy. He followed that with a memorable appearance in Deuce Bigelow, Male Gigolo that same year and a career was born.

Fehr has appeared in such films as The Mummy Returns, Texas Rangers, Resident Evil: Apocalypse and Resident Evil: Extinction. On television he’s co-starred on such series as V, Sleeper Cell, UC: Undercover, Charmed, and most recently, Covert Affairs. Fehr has also done a significant amount of voice-over work, with work on Justice League:Unlimited, American Dad!, Batman:The Brave and The Bold and Young Justice.

His latest film, Super Hybrid, was released on DVD and Blu-ray today from Anchor Bay Entertainment. Oded took some time to talk to me about the film and his upcoming work.

What drew you to Super Hybrid?

I think that, you know, Super Hybrid is very much a genre movie, and it’s not necessarily my genre, but it’s something that I can appreciate.  And, when I read it, I wasn’t sure about it.  The script was also still in its earlier stages, so I went for a meeting with Oliver Hengst and Elizabeth Wang-Lee, and Eric (Valette), the director, and we had one of those great meetings, one of those meetings where you were meeting people that you were going to be friends with for the rest of your life.

We all knew what we had, that it’s a movie that shouldn’t take itself too seriously, and hopefully will be a lot of fun to shoot.  And that’s really what drew me — is the people involved.  We worked together on the script, and made Ray a lot more slimy and annoying, and hopefully succeeded with that. 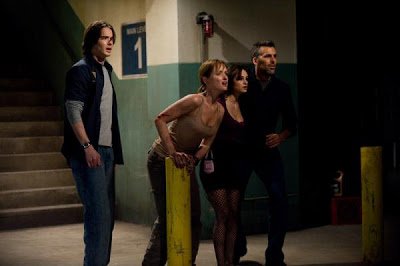 I watched the film, and what I found very interesting was even though it’s a killer car film, it’s also set in a very claustrophobic environment, the garage.  Was that a challenge not only having a car as a protagonist but also being in a confined area?

Yeah.  I mean, the confined area was huge.  It was a huge kind of a hangar made out of cement, in Regina, Canada, and it was definitely claustrophobic.  I mean, after a while, you’re going to miss the sun and miss being outside.  The effect that we created while we were filming it there worked well: the darkness, the hard walls, and having all these vehicles driving around at high speeds and so on.  The effect that you feel in the film was very much real. 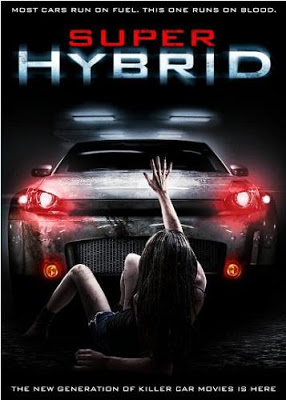 Unlike other killer car films, like The Car or Christine, the vehicle super-hybrid kind of changes shape and functions in a much more chameleon-like capacity.  Did you find it difficult to act opposite an object, versus another actor?

Yeah.  You know, it’s always slightly harder, acting opposite an object.  I’m sure there are actors out there who would rather work with an object than with their co-stars.  But that being said, I  didn’t encounter too much of that in my career, so I’ve been pretty lucky.  It’s hard but my character is more annoying towards everyone else, so I was lucky enough to just work with Shannon (Beckner) and Ryan (Kennedy) and Adrien (Dorval) and so on, and be more annoying towards them.

The car was more scary, and that’s where I had to pretend.  But we all played off each other.

You’ve done television, you’ve done film, you’ve don’t actually a fair amount of animation voice work.  Do you have a preference for what you work in, what area?

I like it all, and  I love the voice-over work.  That’s kind of picked up a little bit even more in the last few years, and I love doing that.

It means a few things.  It means I don’t have to be away from my family for too long while I’m doing it;  It means that I don’t have to put any make-up on or wear any fancy costume or anything like that, or worry about all the hair, and all the things that are very unnatural for me.

I love the challenge of creating a character by using your voice only.  I’m doing a show right now called Young Justice, which is a show on the Cartoon Network and it’s great fun.  But of course, filming on-screen is phenomenal too.  I like it all.

Your next film, For The Love of Money is the first time in a film that you actually get to play an Israeli?

Well, it’s actually funny, because on Covert Affairs I played an Israeli too, a secret agent.  But For The Love of Money is more re-enacting a character, and it’s based on a true story.

It’s very interesting meeting that character’s friends and family and so on, all of them that knew him.

The funny thing about it is nobody actually knows that I’m an Israeli actor.

I think very few people do in Israel.  I didn’t start my career there, and I guess when they see the stuff I do, nobody guesses that I’m Israeli, even though my name is Oded.

I’m Jewish, and when I saw you in The Mummy I realized that, “Oded Fehr’s the toughest Jew in movies.”

Oh, I geek out over superheroes and Star Trek and sci-fi movies.  I love the voice-over work that I do.  Basically, it’s a whole bunch of basically like-minded geeks who love those kind of superheroes and stuff like that.  I’m totally into comic books and all that.  So it’s a lot of fun.

Special Thanks to Alyssa Christian who transcribed this interview