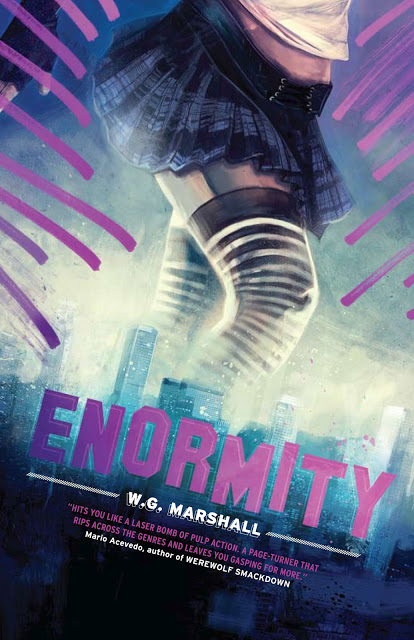 Enormity is the strange tale of an American working in Korea, a lonely young man named Manny Lopes, who is not only physically small (in his own words, he’s a “Creole shrimp”), but his work, his failed marriage, his race, all conspire to make him feel puny and insignificant-the proverbial ninety-eight-pound weakling.

Then one day an accident happens, a quantum explosion, and suddenly Manny awakens to discover that he is big-really big. In fact, Manny is enormous, a mile-high colossus! Now there’s no stopping him: he’s a one-man weapon of mass destruction. Yet he means well.

Enormity takes some odd turns, featuring characters like surfing gangbangers, elderly terrorists, and a North Korean assassin who thinks she’s Dorothy from The Wizard of Oz. There’s also sex, violence, and action galore, with the army throwing everything it has against the rampaging colossus that is Manny Lopes. But there’s only one weapon that has any chance at all of stopping him: his wife.

The book has already received some extremely positive reviews (including a coveted “A” from Sci Fi Magazine).  FOG! Contributor and novelist Walter Greatshell (The Xombies trilogy and Mad Skills) spent an afternoon in Marshall’s New England home discussing the book.

Walter Greatshell:  It’s kind of funny that we both have the initials W.G.

Just because we’re both writers, you know…

I don’t know; just off the top of my head I can think of any number of people with those initials: Warren G. Harding, Woody Guthrie, John Wayne Gacy, Whoopi Goldberg. It’s not that uncommon.

Maybe so, but what are the chances I’ll ever be able to interview another W.G. in my lifetime?

I hope that’s not the only reason you wanted to interview me, is it?

No!  Of course not!  Well, maybe a little…just to dispel the idea that we’re the same person.

When you didn’t show up at the release party for Enormity, a couple of people asked if I was really you.

I know!  I tried to make a joke out of it, but I think I just made things worse.

Damn it, I knew I should’ve cancelled the whole event, but I was preoccupied with slightly more pressing matters. As you know.

Last thing I was worried about was attending that book signing, I’m sorry.

That’s all right. I got your note in time, and everything worked out okay. I even brought hot cocoa and cookies.

I know you did, thank you. I’d like to say for the record that I’ve known of your work since even before your book Xombies, which anticipated the whole zombie craze.  And I thought Mad Skills was great fun, but it also said important things about our post-9/11 world of paranoia and corporate exploitation – I know you took some heat for that.  Your style of combining genres to create something new is similar to what I was going for with Enormity.

Well, you definitely achieved your goal as far as I’m concerned, and obviously Sci Fi Magazine agrees, because they just gave it their highest rating.  So tell me a little bit about how you came up with Enormity.

First of all, I lived in Korea and Japan for a number of years, and even briefly crossed the border into North Korea, so I always thought these places would be interesting settings for a novel.  Not that my
depiction of them is necessarily accurate—it’s more a satirical embellishment of absurd geopolitical realities, not to mention male/female sexual politics. There’s a lot of crazy stuff going on, but Enormity is essentially my homage to the giant monster movies I loved as a kid – Godzilla, King Kong, Food of the Gods – combined with satirical classics like Gulliver’s Travels and Dr. Strangelove.  It’s about a young American guy working as a military contractor in Korea, who is changed by a quantum accident into a mile-high giant, and how he copes with this unthinkable new reality.  How do you deal with suddenly being the equivalent of natural disaster, bringing death and destruction with every step you take?

I liked how you sidestepped the obvious plausibility issues of someone existing at that scale – the whole business with Dark Matter and “Little Big Bangs.” Was any of that based on actual quantum theory?

What little I know of it. Fortunately, it’s a very arcane science, and lends itself to creative interpretation.

I’ll say.  So there are these crazy scientific issues, and also the military and political ramifications of a gigantic American stomping around the Korean Peninsula, which threatens to turn into World War III.  The book is full of action and excitement on an outrageously massive scale. And yet it’s also a strangely personal, intimate story about the main character’s relationship problems.  Sex is not usually a part of the average Japanese monster movie.  What made you decide to go there?

The reason I started writing in the first place was because I felt that mainstream pop-fiction was becoming the last bastion of nonthreatening, G-rated, family-friendly entertainment, and I hated it.

Music, movies, even TV, have all become much more sophisticated than your average genre bestseller, and that’s just wrong.  As a kid, I grew up reading popular novels that actually explored social taboos: The Exorcist, Deliverance, Carrie, One Flew Over the Cuckoo’s Nest, Portnoy’s Complaint.  Even Jaws had a disturbing sexual subplot, which the Spielberg movie chopped out – probably wisely.

But I decided in writing Enormity that I was not going to censor myself, and leave it to others to decide if I was over the line or not.  Much of the story is so fantastically unreal that I felt it was necessary to have a deeply human element to ground it, and also to show why it sucks to be a giant: there’s no place to hide. All your embarrassing personal issues and body problems are literally magnified to gigantic proportions.

Well, I for one appreciate your hilariously vivid take on the material. Frankly, that’s what makes Enormity so refreshing: It’s not just more generic kid’s stuff. It respects mature audiences.

Oh my God. What have I done?