The artist in question: One Stanley Kirk Burrell, born in Oakland, California to hard circumstances.

Through struggle and hustle, Burrell managed to make a living without having to resort to the drug trade.

For a time, he was a batboy for the Oakland Athletics, and had a nice little racket there selling complimentary tickets given to him by players. Later, he did a three-year stint in the Navy.

A natural performer since his childhood spent dancing for money in front of the Oakland Coliseum, Burrell stayed on his grind as he ventured into rap, adopting the stage name MC Hammer (“Hammer” having been given to him by Reggie Jackson during his batboy days)

Burrell became one of the defining performers of the early ’90s, and one of the biggest acts ever in rap.

And yet, most hip-hop histories omit most, if not all of his story, focusing on the likes of Ice-T, NWA, and other west coast contemporaries. Hammer fell out of fashion not long after his fourth album, Too Legit to Quit, and by that time had burned through most of his fortune. After an ill-advised repackaging in a more hardcore style, he sank into obscurity, only to return to notoriety in the last decade–on the shoulders of nostalgia, as many of his vintage ultimately do.

All of this is to say that Hammer was big in the ’90s, and as with all things ’90s these days, we must consider the question: Are we remembering Hammer properly? Does he deserve greater reverence for his place in pop history? Or are we right to treat him as disposable kitsch. The two of us tossed this question around, with opposing perspectives on the matter.

So let’s first present the case for MC Hammer. 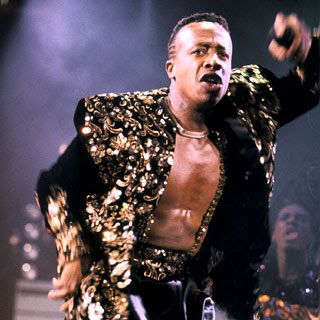 First of all, in today’s hip hop world, it’s the businessmen who are the ultimate heroes in the commercial rap game.

Money talks, and negotiation and commerce will net you much more than thuggery ever would. Take, for example, Rick Ross, one of rap’s brightest stars right now. He doesn’t rap lyrics so much as pack an episode of Lifestyles of the Rich and Famous into four-minute blocks, over beats that wouldn’t sound entirely out of place in a James Bond film. In this world, the ultimate status is to be a “boss.”

At his nineties peak, Hammer was the epitome of boss. He was the first rap artist to have an album certified diamond (improbable then, pretty much impossible now). His elaborate shows packed in thousands each night, and his payroll ballooned, buoyed by his excessive employment of family and friends.

Hammer’s hike to the top began with his first single, “Ring ‘Em,” which he had pressed on demand. He shipped copies out himself and hit the road to promote himself. Airplay was scarce in those days, although his hard work and friendly personality helped him make friends of his hip-hop heroes, acts like Melle Mel and Whodini. For all his attempts to break through, New York remained elusive, though ultimately, he would break through with his second album, “Please Hammer Don’t Hurt ‘Em.”

Which brings us to his impact and reach.

Rap may never have reached its crossover potential if not for Hammer. “Please Hammer Don’t Hurt ‘Em” blindsided the pop charts, and its follow-up “Too Legit To Quit” was like a cultural event. Hammer shilled for Pepsi and had his own doll from Mattel. At the height of Hammermania came “Hammerman,” his own Saturday morning cartoon where he fought bad guys with the help of magic shoes that gave him super dance powers.

And though it seems like the music is tertiary to our case at this point, one could credibly argue Hammer’s best work holds up as classic dance music to this day. “U Can’t Touch This,” “Here Comes the Hammer,” and “Too Legit to Quit” are inoffensive, fast-paced dancefloor anthems, and the videos for each song showcased his superb physicality. For a time, the world was abuzz with rumors that Hammer and Michael Jackson would challenge each other in a dance-off. Surely, Hammer pants aside, Burrell’s lasting legacy is that of an electric performer, able to explode crowds with a shake of the hips in a way not seen since Michael Jackson, or even Elvis.

Given all of the above, why aren’t we treating Hammer with greater legitimacy?

Well, that brings us to the case against MC Hammer…

For one thing, when you actually listen to “Please Hammer Don’t Hurt ‘Em” past the first two songs, it becomes clear why hip-hop ultimately rejected him. They’re pretty terrible. Copious, obvious sampling gets tiresome as melodies are borrowed, adapted, and outright stolen from not only Rick James (twice), but also Marvin Gaye, Michael Jackson and Prince.

At best, Hammer is a passable lyricist, but he’s seldom at what anyone would consider “best.”

Hammer is also very much of his time, which is fine when you’re at a party and the DJ is spinning new jack swing, hip-pop and G-funk all night. It’s also fun to pull up the video for “Too Legit” on YouTube if you’re in the mood for a laugh. Actually, the two of us split on whether it truly gets on one’s nerves: T.J. loves it, while Frankie appreciates the excess only the first time around.

Even the first time around, Hammer’s hype was disproportionate to his actual talent. While that is a good summary of what I’ve said above, I specifically mean his dancing. Yes, he was good, even pretty good, but definitely not to be mentioned in the same breath as Michael Jackson.

So, MC Hammer: all that, or eff that?

It’s easy to discount him because of his artistic shortcomings, and dismiss him as ’90s tripe. However, he’s too important to disregard entirely. There’s a place for Hammer in hip-hop history, one he’s earned through hard work and heroic persistence, and the game owes him a great debt. Everyone from Jay-Z to Kanye West, and yes, even Rick Ross, is there because of the trail Hammer blazed.

But as an artist, does he hold up now? No. No he doesn’t.

In this article:Hip-Hop/Rap, Music, Written by Frankie Thirteen, Written by T.J. Martinez