Here at Mystery Box H.Q. I was pondering a few column ideas as I often do, and one that I’d wanted to cover for some time was a fave toy from the ’70s called Hugo, Man Of A Thousand Faces.

I have been spending a few days up in the beautiful green of New Hampshire, and one night after laying in bed wondering if indeed this Hugo toy would make for a good column subject, I got up and made my way to splash some water on my face.

There staring back at me from one of the bathroom shelves was none other than a hand and body lotion named HUGO.

If ever there would be a sign from the retro toy heavens telling me to write about something, then surely, this was it… 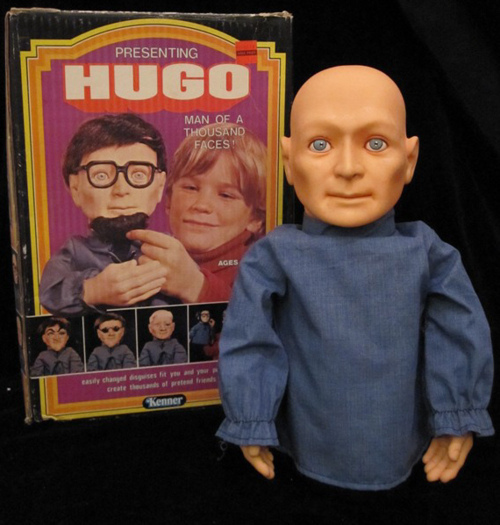 Hugo, Man Of A Thousand Faces was released by The Kenner Toy Company (the original Spirograph and Easy Bake Ovens in the early ’60s) in 1975 and created by Director, Screenwriter, Make-Up Artist, Alan Ormsby (Dir. Children Shouldn’t Play With Dead Things 1972). In the U.K. the company Denya Fisher released the toy.

In your Hugo box you received the Hugo figure (in England he had plastic arms, not so for us American kids who had stuffed cotton ones) and an array of plastic face parts, fake hair bits and a tube of adhesive to stick things on temporarily until your next Hugo assignment arose.

As kids have always been obsessed with disguise and Halloween, it seemed a perfect fit for a toy to be made that was different enough from their sister’s makeup head Barbie.

Still I ponder the timing of this toy, as it seemed somewhat late in the game (by like a decade) to fully capture the Cold War era gargantuan smash that was the Sean Connery James Bond craze of the early to mid sixties, when every toy, television show and pop culture medium has spies and secret agents coming from all sides.

However, this James Bond, Cold War craze hooked me as a kid and never left me, even to this day. So for myself, who was always hugely fascinated with the master of disguises, Artemus Gordon, from the legendary and still great Wild Wild West television series, Hugo was a great fit.

I’m not quite sure however that Hugo could have resonated with other kids as much as he did for me though, perhaps a couple of future thespians would fall in love with the Yul Brynner looks of Hugo and imagine themselves able to transform him into a musical role out of the King and I or for an epic such as The Ten Commandments. Also there was no really big element of horror or fantasy to Hugo, no monster make-up or anything sci-fi related here either, well he did come with a set of fangs, an eye patch and scars, so a vampire or werewolf or other creep was possible I suppose. No huge comic book superhero slant either. Seems Hugo was really meant more for a straight up old fashioned, assume another identity stuff. Once again, like a ghoulish character or one of the low lives Artemus Gordon would have come up with.

Then again the mere name of the toy was definitely an homage to silent film actor Lon Chaney, the original Man of a Thousand Faces, so I guess therein lies the inspiration and intention.

Yet, if you were a kid obsessed with television, schlock movies and the many varied character actors you saw weekly, you could really let your imagination go wild with this toy, and that’s the beauty of Hugo. With his creepy, unemotional demeanor, Hugo was one of the best professional partners around, even if he scared your relatives.

I can remember much later seeing Hugo pop up via Pee Wee Herman’s infamous HBO stage show pilot where he did a creepy ventriloquist bit. Even more prominent was an ongoing guest starring role for Hugo on The Uncle Floyd Show where he was seen all the time in various situations. Hugo is in a deleted scene from Tron Legacy. Folks love taking pics of him in various places and with special effects added. There are fan sites all over the web and even a virtual Hugo site which lets you play with the toy online. 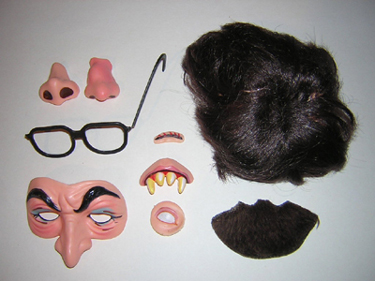 These days a complete Hugo with box and contents is super collectible and costly (and rare, as the glue and other make-up bits usually dried up long ago), but with the repros of many toys from the past being released (Mego figures for example) I can only imagine that at some point, we will get a new Hugo emerging to reclaim his rightful place as king toy stud sent from the gods. 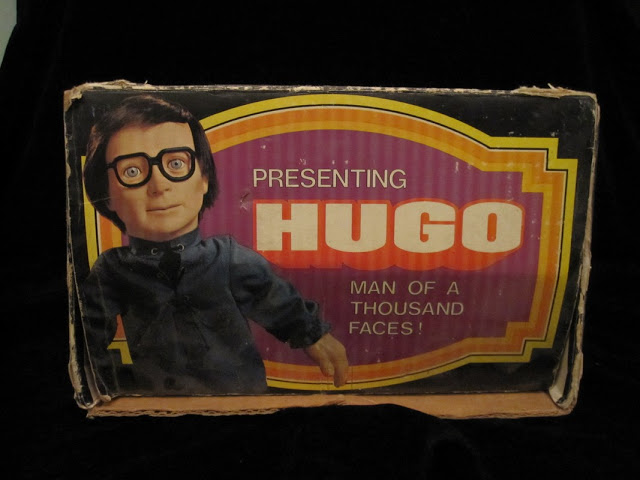 For little did we know back in the seventies, not only does Hugo really have a thousand faces, he is also immortal…