I’m getting married in October, so I’m deep in wedding stuff at this point.

Doing so has forced me to confront whatever ideas I’ve had about weddings and marriage, which is funny because they’re not things I’ve spent time consciously considering.

But now that I am thinking about the wedding, my nerd personality has been called into question. How much nerd stuff can there be at my wedding?

Do I really want one of those weddings? With Star Wars characters everywhere or an Alien chestburster cake?

Instead, the fiancee and I are talking about sneaking some nerd stuff into the wedding.

I’m reluctant, though, because I don’t much like nerding out in public. I’m not 15 anymore. I tend to prefer the Stefan Urquelle candied shell that covers the Steve Urkel middle, as it were. And for posterity’s sake, I don’t think I’ll look back on the wedding photos decades later and say, “Man, I looked awesome in that RoboCop suit.”

However, for today, let’s indulge what would be my top nerd weddings. 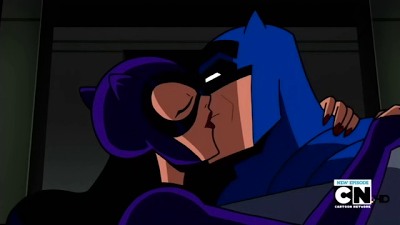 If you must know anything about my nerd proclivities, know this: Batman’s at the top. He is the shit. Some folks think I like all superhero things; nope, really just Batman.

For the wedding, I think I’d go with Silver Age-era in terms of costumes. Leather cape and cowl with an upgraded union-suit and raised bat insignia so that he looks more like an old-school football player.

The real coup of this look would be the bride, as she’d be made up like Lana Turner and wear the awesome purple gown with plunging neckline and high slit, matched with an emerald cape. Perhaps instead of the purple cat’s head, we’ll refit into a domino mask/cat ears combo that would act as a veil.

The wedding party would be total Justice League of America, with each side in paired couples: Superman and Lois Lane, Wonder Woman and Steve Trevor, The Flash and Iris Allen, Green Lantern and Carol Ferris. Carol’s dress would have a hint of Star Sapphire, of course. Add a Robin ring bearer and Batgirl flower girl, and we’re rolling. 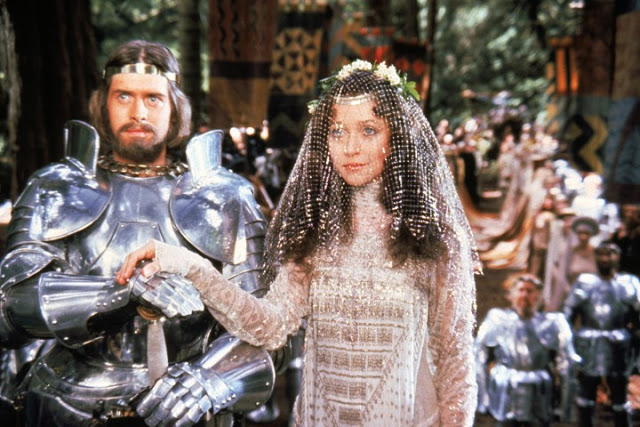 This one goes all the way back to high school, watching the movie Excalibur with a friend. As we watched the wedding scene, he said he imagined my wedding would be either something this extravagantly insane, or very stark and simple like barefoot in a barn. Always stuck with me since then.

But if you’ve read enough Camelot stuff, this isn’t a great theme to play to the letter. The romance between King Arthur and Queen Guinevere doesn’t really work out, and we’d have to be real careful about who we’d pick as Lancelot.

So instead we could make it more generic, kings-and-knights sort of thing.

Full suits of armor, banners everywhere. The bride in a dragon-themed golden gown with chiffon wings trailing out the back into a train. We’d stand at the sword in the stone before the officiant dressed as a dark-ages priest swatting everyone with Christ-leaves.

Maybe I’d have to fight a dude to prove my vows, or something crazy like that. Why not use a wedding as a chance to learn swordplay?

A David Bowie wedding would be about as good as it gets. I’d probably go with a Ziggy Stardust and the Spiders from Mars theme. Everything would be glam rock and roll, tight pants and open-chest shirts. And tons of androgyny, as the men and women all wear these same stuff. We’d need a cake shaped like an electric guitar, or a spaceship, or a spaceship playing guitar. Freak out in a moonage daydream, oh yeah.

Even crazier would be if when the reception started, we switched everything up into ’80s Bowie? You’d walk into the Absolute Beginners movie, with each member of the wedding party in all new outfits – all Nile Rodgers guitars, day-glo suits and big hair. We’d be loving the alien. 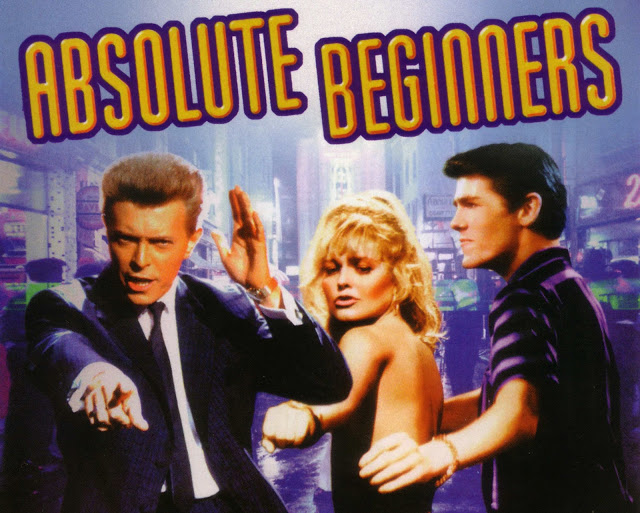 You could go two ways about it. One would be the classic-doll approach, with the authentic-reproduction uniforms and weapons. Each guy in the wedding party would be a different Joe: Army grunt, Marine, jungle adventure, pilot, etc. (Someone would have to grow one of those awesome doll beards.) And since Hasbro started G.I. Joe as a counterpart to Mattel’s Barbie, let’s do a Joe/Barbie mashup with each women in the party as a different classic Barbie from the ’50s and ’60s. 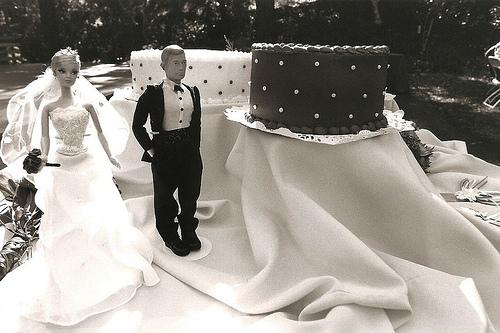 Or, you go with the ’80s A Real American Hero action figure stuff. Though for that, I’d say screw the Joes and go with Cobra. The costumes would be so much more rad. Would I go with faceplate Cobra Commander, or the hood? Throw in the Baroness, Destro, Tomax and Xamot, Storm Shadow, Dr. Mindbender, Zartan, and we’ve got a serious party. All the guests would get those silly Cobra soldier hats, and say “Hail Cobra!” all the time. Just one thing: NO Cobra-La bullshit. You come into this wedding dressed as Golobulus or mention some devo-spores, and you’re getting run out of her. And don’t even come close to that stupid “Cobra-La-la-la-la-la-la-la-la-la-la!” battle cry. LAME. 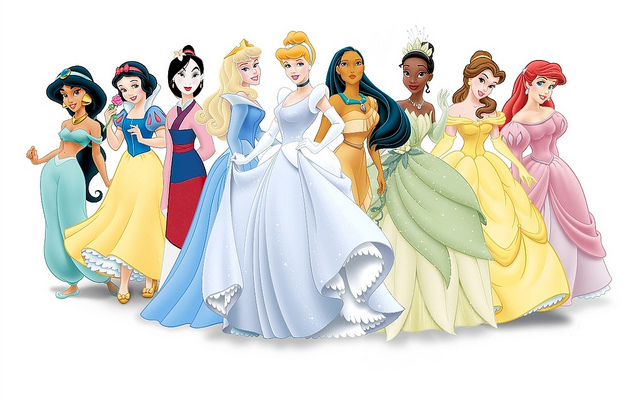 Yep. My big honkin’ feminist of a fiancee wants a Disney princess wedding.

A couple of years into our relationship, we took a trip to Walt Disney World because I had some discounts through my job and, at age 25, I’d never been there. Until then, I’d never known how much she was into Cinderella.

When we first arrived, Disney World had imported a show from Tokyo the depicted Cinderella’s coronation as a princes – something you never saw in the movie. Cindy and Prince Charming arrive with the Fairy Godmother, with the King and all the other Disney princesses and princes as guests.

The crown is placed on Cindy’s head, and after she and Charming dance, they stand on a pedestal that rises 20 feet into the air. Cinderella, looking like Princess Diana, waves to the crowd in such sincere joy and adoration, and she proclaims, “Every girl in a princess in her heart!” as the scene is engulfed in fireworks.

All the women in the audience, my fiancee included, were SOBBING. 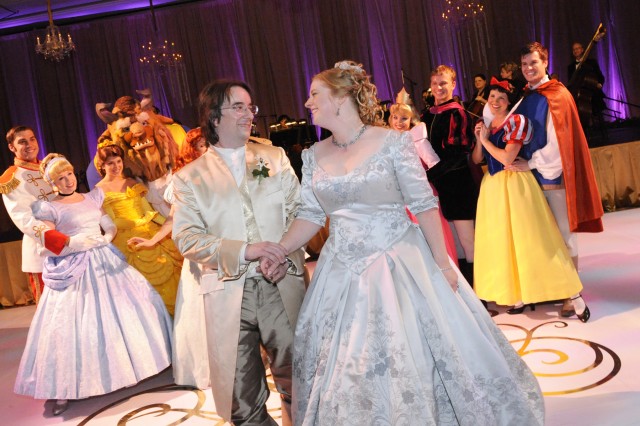 I’m pretty sure the Disney parks really do this, if you pay enough.

My fiancee says a Doctor Who wedding would be fun, too: Get a police box TARDIS, pick your favorite Doctor/companion for bride and groom, have guests pose for pictures in front of the Face of Boe. She literally laughed out loud when she thought of K-9 being the ring bearer, and a cake in the shape of a Dalek. Rock on.

Just no Star Trek
We’ve got a little over four months of planning left, and most of it’s done. We’ll find a way to indulge our nerd selves as we proclaim our love with Froot Loop rings.

As long as it’s not Star Trek.

While the voyage of the Enterprise is my fiancee’s biggest historical fandom, her witnessing of an awful Star Trek wedding that was wedged between events at a convention has spoiled that fantasy forever. She overheard the bride say to her brand-new husband as they walked out, “I can’t believe you made me do this.”