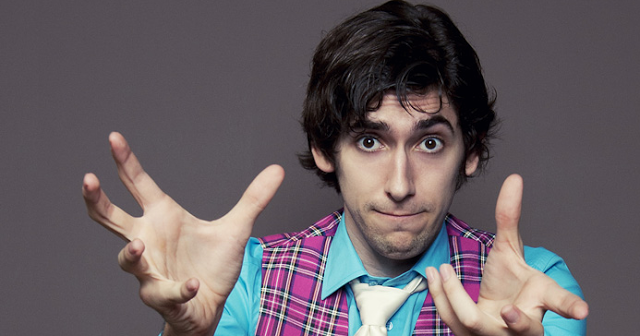 Max Landis is having a pretty good year.

He saw Chronicle, a film he wrote debut at number one and that same week The Death and Life of Superman, a short film he wrote and directed was released to YouTube (It’s since racked up close to a million and a half views).

In addition, his screenplay The Good Time Gang has Mark Wahlberg and Jonah Hill attached to star; his pitch, Amnesty, attracted the interest of Ron Howard to sign on to direct and he’s reimagining Frankenstein at Fox for Shawn Levy.

Then, there’s also the inevitable Chronicle 2...

The must-see Chronicle is currently available on DVD & Blu-ray.

Max took some time out of his very busy schedule to chat with FOG!

What was the genesis for Chronicle?

An hour long conversation with Josh Trank in a backyard.

You’ve stated previously that Chronicle is not a superhero movie, but there are several iconic superhero conventions in the film from a mysterious substance granting powers, to wearing a version of a costume, donning a mask to become a villain; were these moments intentional nods to the genre or just necessary story points to tell your tale?

Chronicle is NOT a superhero movie, but that doesn’t preclude it from being my love letter to super heroes. The points you mention, along with many others, were my effort to naturalistically work these tropes that we all know so well into a dramatic story. They’re very intentional, but they’re not transformative; at its heart, Chronicle has more in common with Carrie than Spider-Man.

Prior to becoming a screenwriter you were interested in possibly becoming and author or comic book writer; which comic book author and novelist has had the biggest influence on your work and why?

I’m not sure any one comic or comic writer influenced my stuff more than any other; I could say Garth Ennis, I could say Grant Morrison, but at the end I’d just be listing people I really like, instead of actual stylistic influences. Prose wise, though, undoubtedly Stephen King. I consider him an absolute virtuoso and genius of storytelling and character, as well as one of the most visceral literary acrobats when it comes to drawing an image in your head. Even in his bad stuff, there’s still at least two scenes or images that will stick with you forever.

You sold Chronicle and the upcoming Good Time Gang as specs after writing a number of unproduced screenplays and you’ve said you shifted from writing something that you wanted to see to something you’ve never seen before. Do you think that’s why the studios responded, simply because it was something completely different or do you think that applying this approach made you more confident in your work?

I think it was less about showing people something completely different, and more about showing people stuff that was familiar to them in a new way. I also think the response I’ve gotten, after writing a billion unsold screenplays, comes primarily from the fact that during those billion unsold screenplays I was able to consciously try to improve my technique, pacing, dialogue and general style of writing. I think my recent success has more to do with the fact that my scripts are fun and easy to read, rather than any one trick of design or concept.

Your father, John Landis is a writer/director and your mother, Deborah Nadoolman is a costume designer.  Growing up in a family that works in the industry, did you always think that you would work in the family business, per se?

Yes. Since day one. I think that’s how it happens, really; there are so many people in the industry who you don’t even know were born into it; JJ Abrams, for example. I think once you get the bug you’re just there for life. Like herpes.

What can you tell me about Chronicle 2? What does the “movie” that was the first film mean in the reality of the sequel?

Nothing. I already said too much in Dubai.

Well, Cabin In The Woods pretty much rocked my socks.

Breaking Bad (of course, duh), but also, and this caught me off guard, Grimm. It’s kind of a really good show.

Finally played through Max Payne 3 and was sorely disappointed; no weird surreal stuff, come on! Everyone and their brother is telling me to watch Homeland, but I haven’t yet.

What’m I really geeking out on?

Trying to decide on wallpaper.