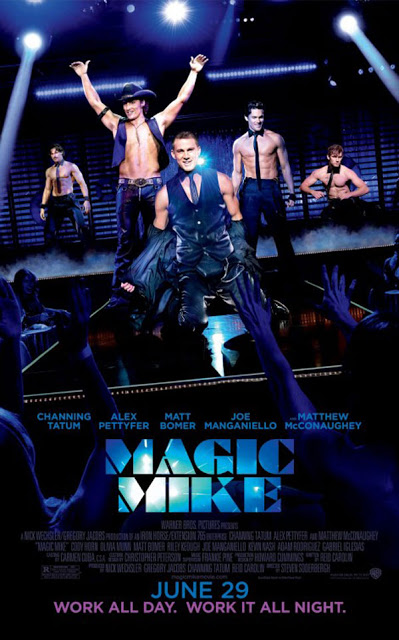 In the last few years he’s shown he’s capable of handing romance, action, drama and comedy.  And now, with Magic Mike, Tatum delivers one of his best performances yet.

As Mike, Tatum is a bit of a dreamer; spending his days doing construction, his nights as a male stripper, putting away cash to start his own business building one of a kind furniture.  Mike is a simple guy, who longs to be deep, but most of his relationships are superficial.

Mike meets The Kid (Adam, played by Alex Pettyfer), taking him under his wing as the latest stripper at Tampa’s Club Xquisite.  There, he joins fellow performers Matt Bomer, Joe Manganiello, Kevin Nash and Adam Rodriguez.  Matthew McConaughey as the club’s owner Dallas, delivers the best performance of his career; he’s funny, he’s charismatic, but there’s something going on behind his eyes – he’s taking everything in, working the room with a bit of an almost psychotic energy.

Mike finds himself attracted to Adam’s sister, Brooke (Cody Horn, delivering a performance that feels like it was delivered via teleprompter). Director Steven Soderbergh’s cautionary tale plays a bit like Boogie Nights–Light, as Adam finds himself deep in a world of dancing, partying, picking up women, making easy money, ego, and taking and dealing drugs.  Suddenly Mike becomes self aware, realizing how much of Adam’s failures he sees within himself.

But, Soderbergh never lets the darkness permeate the film, and Magic Mike is heavy on charm, and has more depth than it deserves to.  Channing anchors the film and really delivers the internal struggles, sadness, and self-awareness of the ridiculousness around him without it feeling forced or overdone.  Pettyfer delivers an understated performance and I wouldn’t be surprised to see McConaughey’s name mentioned often come awards season.

Magic Mike isn’t the most magical film of the summer, but it’s one of the better ones.  Recommended.