Both Todd Lousio and Sarah Koskoff started their careers in front of the camera, appearing in both television and film.

With a solid amount of pop culture street cred between them (Lousio played record store employee Dick opposite John Cusack and Jack Black in High Fidelity and Koskoff portayed Theresa Nemman, the alien abductee in The X-Files pilot, recurring several times over the series’ run).

Hello I Must Be Going is the couple’s first film together as writer and director.  Koskoff previously wrote several plays and Lousio directed the critically acclaimed Love Liza starring Philip Seymour Hoffman, and his sophomore effort, The Marc Pease Experience with Ben Stiller, Jason Schwartzman and Anna Kendrick.

In Hello I Must Be Going, Melanie Lynsky plays Amy, a 35 year old divorcée who has moved back in with her parents (Blythe Danner, Stan Minsky) in Connecticut, and finds her life rejuvenated after having an affair with her father’s business associate’s much younger son (Christopher Abbott).

Todd and Sarah spoke to me to discuss the film, which won rave reviews at the Sundance Film Festival.

FOG!: You both started out as actors, was your transition into doing work behind the camera always your goal or was it just kind of a path you found yourselves on?

Todd Louiso: It was always what I have done. I’ve been making films since I was in high school, and I went to film school and I’ve always been an actor, too.  You know, when you’re an actor you get seen more because you’re on the screen, on  TV or in the movies and I guess people see that more than they know whether you’re directing something or not.  It always takes a long time to get films made. I love doing them both, you know, it’s a great thing to be able to do them both. It’s always just been another thing I love to do. Sarah?

Sarah Koskoff: Yeah, similarly I’ve always been writing, I’ve been writing plays for a long time, and while I was acting I had plays produced and so it was kind of a natural transition into movies and I enjoy it much more than acting.

Sarah, most of your writing previously has been for the stage.  What was the genesis for Hello I Must Be Going and was it always intended to be a movie versus a possible play? And Todd, how long were you involved?  Was this the kind of project that Sarah started writing and then she showed it to you, or did she talk about it before she started writing?

TL: She started writing it…when did you start writing it?

SK: I don’t know but it doesn’t matter, I wrote it and I actually think I told you that I wanted to write a movie about a woman who has a relationship with a young guy and you were like “Whatever.” No you were like, you know…I don’t like hear anything because you know…we’re married and like “That is not anything that I want to even hear about.” And I was like “Fine! I’m going to go and I’m going to write it myself and it’s not going to involve you.” So, it was like a fight, and then I did, I went and I wrote it and eventually he came around to see that…

TL: It was really great.

And did you always intend it to be a movie versus a play?

SK: I did, yeah. It wasn’t like I sat down to write it and it was a movie. I wanted to write something that was very closely observed and I couldn’t do that in a play script,the small moments.  It was a big transition to really feeling like “I love this, I love writing screenplays.” I hadn’t written any before and it came out as a film and I really enjoyed it and I haven’t wanted to write plays since then.

Interesting. You know, for a couple to work so closely on a project, do you guys work with a clear definition of your roles or are you both kind of involved at every stage; like, Sarah, were you on the set during filming or did you both kind of say, “Okay, I’m the writer, you’re the director” and have…

SK: This is the first time we’ve done this, so a lot of it we were making up as we go along and finding out what worked and what didn’t work, right Todd?

TL: Yeah and it took us a while to figure out how we were going to do it and there were a lot of hard times, definitely, but I think where we ended up was having a clear structure and definition of our roles, as far as Sarah being the writer and me being the director and that helps a lot.  It works out really well and then in post-production, both Sarah and I collaborated with the editor because we were editing in our house, basically, but we were on a really tight deadline to get into the festival.

SK: Right, so we had to work quickly and we had to work together and I’m a big rewriter, I rewrite excessively, and so for me, the editing process was sort of like a final rewrite so I loved that because I could cut and paste, I could give my input and we could argue things out, you know, the editor had a strong vision as well so it was very collaborative.

TL: It was actually so great having Sarah be there as the writer.  I know usually directors and editors don’t want a writer around, but it was great having the writer around and having Sarah there.  Actually, she was much more lethal with her cuts than I was. I tended to be a little more careful, whereas Sarah would come in and, actually our editor started calling her ‘The Hatchet’, because she would just come in and cut entire scenes, and say “This isn’t working”, whereas I would be a bit more like “Oh, I don’t know if I want to cut that because I really like this, that and the other” but Sarah was more like…

TL: Yeah, for both of us actually.

SK: It came towards the end too, as sort of like a rewrite, with that character there’s been a lot of different avenues that I’d gone down. It seemed perfect, after a while, it seemed obvious, you know, who’s this kid who’s so much older than his years, and he’s like, well, it’s a kid who’s been working his whole life, and for me that was the people who I knew, kids who I had worked with who were like that, you know, were so mature, some of them had been supporting their families since they were six years old with their TV income. It was a very specific thing that I knew very well, and Todd knew very well because Todd was working at a very young age and when you grow up that way, oftentimes it’s just what you do; it’s not what you’ve chosen to do. So yeah, that came about pretty organically from both of our experiences of that.

How did you end up casting Melanie Lynskey?  Was she someone you had envisioned from the very beginning, or did she come in later? 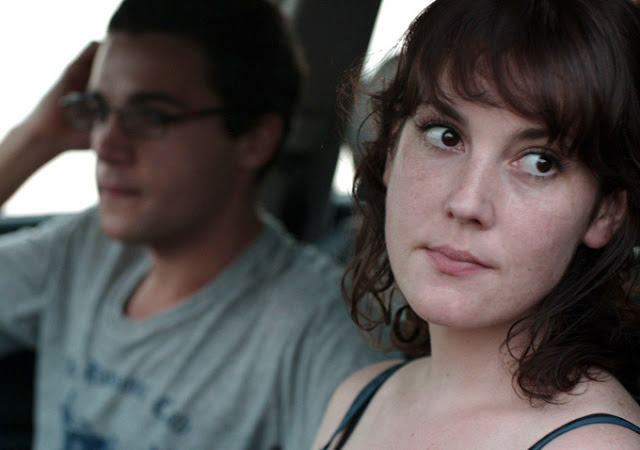 TL: Yeah, she brought such depth to the character that neither of us had…we knew we wanted it, but we didn’t know we’d find it and she just brought it.

SK: Yeah, it worked on so many levels with Melanie and it was what we both wanted, and that’s actually true about Christopher (Abbott) too.  There were other people who auditioned, and other people who were names that had been floated around and Christopher just had this A-game vulnerability –

SK: And maturity and we just thought that the two of them together was so emotional. It was sort of like it chose us really; there was no way around it.

TL: Yes, and that’s great when that happens.

Going forward do you see either of you going back to acting or do you kind of feel like this is the path you’re on for good now?
SK: I’m not going back. Todd?

TL: Yeah, you know, I enjoy acting, I do. You know, I love to direct things, it’s just what I do, it’s not even like “Gosh, I love to direct,” it’s just something that’s inside of me.  Acting is great because, besides the income which is necessary, it allows me to connect with acting again as an art form.  That in turn just helps me direct actors and really, it can be so much fun to do an acting role when that’s really the only thing you have to do. You show up, you do your lines, you don’t have to worry about the production design or whether or not a microphone’s showing or continuity.  You can just focus on this one very specific thing, you can just do it to the very best of your ability and after that your job is done, and that can be just wonderful. A film, it takes like three or four years, you know.

Do you have a new project you’re both working on, or is it too early to talk about?

SK: Yeah, we have a few projects but they’re still…

TL: Yeah, there’s one in particular I think that…Yeah, I don’t know why I said that because we can’t say anything. (Laughing) Sorry!

What are you both geeking out over right now?

TL: That was amazing.

SK: It’s incredible. I would highly recommend it.

Hello I Must Be Going opens in theaters tomorrow, September 7th.