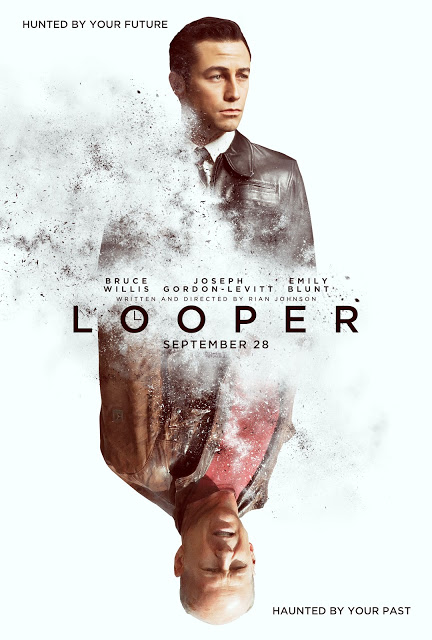 In the future time travel has been created and immediately outlawed, only to be used by criminal organizations, who use it to send rivals back in time to be murdered by Loopers, assassins who take their targets entirely out of the timestream.  Loopers are also tasked with “closing the loop,” killing their future selves in exchange for a lump payment, giving themselves a thirty year retirement.

And ten percent of the population has telekinesis.

Which, in my opinion is the film’s biggest fault.

Make no mistake, Looper is a fun and extremely well done movie; and a solid recommendation.  But, this inclusion of a second fantastic element, takes the film out of the scientific premise and adds a “supernatural” element that I think hinders the film.

Joseph Gordon-Levitt plays Joe, a Looper who has to track down his future self (Bruce Willis) after he is sent to the past and escapes.  Wearing prosthetics and a pair of distracting eyebrows, Gordon-Levitt does an admirable job capturing the nuances, expressions and delivery of Bruce Willis.  And, Willis gives one of his strongest performances in recent memory.  The rest of the cast are great, with standout performances from Emily Blunt, Jeff Daniels and young actor Pierce Gagnon.

Looper is a tremendously entertaining, and smart science fiction film which is even more special thanks to writer/director Rian Johnnson’s vision.  The film moves across time in a number of directions (forward, backward and sideways) and for the most part, does so with charm and excitement.  Recommended.