In anticipation of the release of the 23rd 007 adventure Skyfall next month in the U.K.—us chaps here in the U.S. will have to wait until November—and in celebration of James Bond’s 50th anniversary at the movies, it’s high time this Serious Bond Geek finally offered some evaluation on cinema’s longest-running film franchise.

So rev up your Aston Martin, load and lock your PPK and make sure those vodka martinis are shaken, not stirred, for my view (to a kill) of all things Bond—James Bond. 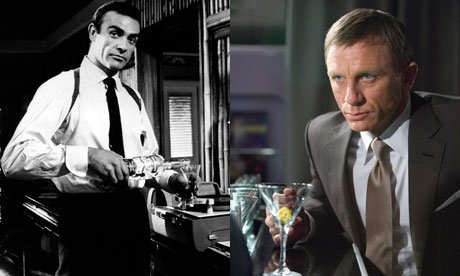 Best Bond Villain: Ernst Stavro Blofeld, who appears in no less than six 007 flicks. The best incarnation of the original Dr. Evil is courtesy of Telly “Kojak” Savalas in On Her Majesty’s Secret Service.

Blofeld’s most nefarious scheme involves a sterility plague he plans to unleash around the globe, while simultaneously meddling in 007’s love life by trying to steal Bond’s fiancée, Tracy. Total bastard. 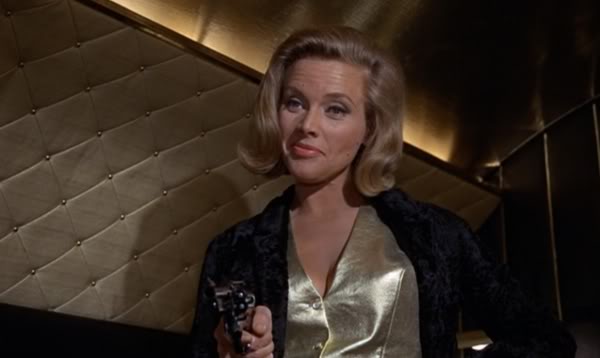 Lamest Bond Babe: I’m looking at you, Tanya Roberts (A View to a Kill).

Best Bond Henchman: Red Grant in From Russia with Love.  Honorable mentions go to Oddjob from Goldfinger and Jaws in The Spy Who Loved Me.

Lamest Henchmen: Hans in You Only Live Twice and Elvis in Quantum of Solace.

Best Bond Henchwoman: Rosa Klebb in From Russia with Love. 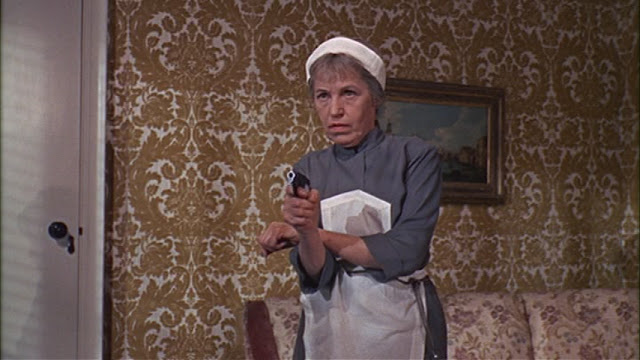 Best Bond Ally: Yankee spook Felix Leiter from the CIA, who appears in nine 007 flicks and has been portrayed by no less than seven different actors. The best Leiter is Jeffrey Wright, appearing in both Casino Royale and Quantum of Solace. 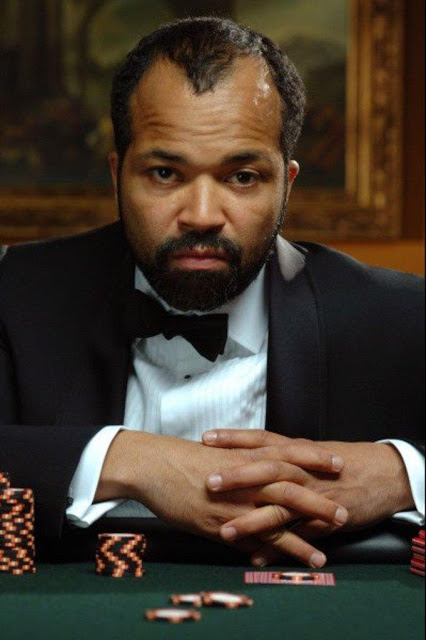 Best Bond Screenplay(s): For their relative adherence to Ian Fleming’s source material, it’s a tie between On Her Majesty’s Secret Service and Casino Royale.

Best Bond Production Design: A three-way tie. From the outlandish sets of Goldfinger, to the hollowed-out volcano fortress of You Only Live Twice followed by the massive submarine-swallowing tanker in The Spy Who Loved Me, nobody does it better than Ken Adam.

Best Bond Cinematography: Ted Moore’s lush camerawork set the aesthetic for 007 from the get-go. His only equal is Phil Meheux, whose richly textured work on GoldenEye and Casino Royale took Bond to new visual heights. Early glimpses of Roger Deakins’ work on Skyfall look positively gorgeous, but until the finished film is released it cannot officially compete here, m’kay?

Best Bond Editing: None of the Bond films are flawless—many contain sloppy lip-synching bits, a few have speed-ramped action cuts that look positively cartoonish, and pretty much every 007 flick contains minor continuity errors (and some not-so-minor, such as the infamous Mustang alley stunt in Diamonds are Forever). Even so, my vote goes to Stuart Baird’s nimble assemblage of Casino Royale.  Highlight: the slick and brutal parkour sequence that kicks off Casino Royale is a mini-masterpiece of razor-sharp timing.

Best Bond Music: The incomparable John Barry remains the fan-favorite composer, whose indelible themes for From Russia with Love, Goldfinger, You Only Live Twice and On Her Majesty’s Secret Service rank among the most memorable movie scores ever conjured, with Majesty’s taking the crown as the best Bond soundtrack ever. Honorable mention goes to Barry’s heir apparent David Arnold, whose work for Tomorrow Never Dies not only benefits from liberal usage of the James Bond Theme, but is further elevated by a kick-ass secondary motif (a techno rendition of k.d. lang’s end-credits song “Surrender”).

Lamest Bond Music: Eric Serra’s synthetic ambient droning for GoldenEye has indeed grown on fans, but it’s the low-water mark for the series, the least “Bondian” soundtrack of the lot. And, yes, that includes Michael Kamen’s generic, non-thematic scoring for Licence to Kill.

Best Bond Title Song(s): Not as simple a decision as you may think, so I’m going with a three-way tie: Shirley Bassey’s infamous Goldfinger, Paul McCartney & Wings’ arresting Live and Let Die and Duran Duran’s pop confection A View to a Kill.

Lamest Bond Title Song: Sorry, Miss Gladys Knight, but the bland Licence to Kill is a total sleeping pill, easily bested by Patti Labelle’s end-credits ballad If You Asked Me To (which Celine Dion subsequently made her own).

Best Bond Stunt: No stranger to bone-crunching, death-defying action, Bond has out-maneuvered pursuing cars and attacking helicopters, whooshed down snowy slopes and icy bobsled runs, jumped a speedboat over land, spiraled a compact car over a collapsed bridge, driven a Lotus off a pier and into the drink, skydived without a parachute at least three times, climbed (and fallen off) a mountain, and (barely) survived a frightful crash in an Aston Martin. But nothing before or since equals the breathtaking ski jump off an Alp that opens 1977’s The Spy Who Loved Me.

Most Exotic Bond Locale: Lots of glamorous options here, from Istanbul in From Russia With Love, the Bahamas in Thunderball, Japan in You Only Live Twice, Las Vegas in Diamonds are Forever,  Phuket in The Man with the Golden Gun, Egypt in The Spy Who Loved Me, Rio de Janeiro in Moonraker, India in Octopussy, Vienna in The Living Daylights, Monte Carlo in GoldenEye and Venice in both Moonraker and Casino Royale.  Tough call, but I’ve gotta go with The Man with the Golden Gun here.

Best Bond Gadget: Again, lots of neat gizmos to choose from, including the exploding briefcase in From Russia With Love, the pocket-sized re-breather from Thunderball, assorted Ninja accoutrement used in You Only Live Twice, the Lotus car/submarine in The Spy Who Loved Me, various safecrackers utilized in You Only Live Twice, On Her Majesty’s Secret Service and Moonraker, the remote-control BMW from Tomorrow Never Dies, and an electromagnetic RPM controller that gadget guru Q uses in Diamonds are Forever to cheat at the slot machines in Vegas. Alas, none of these wonderful toys comes close to Bond’s fully loaded Aston Martin with ejector seat, machine-guns, oil-slick emitter and tire-gougers from Goldfinger.

Best Bond Title Sequence: The late, great Maurice Binder is generally given credit for setting the standard for Bond title sequences, despite the fact that the credits sequence for the most universally recognized 007 flick (Goldfinger) was created by Robert Brownjohn. Still, Binder’s successor Daniel Kleinman’s inventive work for GoldenEye and Casino Royale has raised the bar even further. It’s a close call, but my vote is for the dazzling three-dimensional artistry of GoldenEye.

Best Bond Poster: The international one-sheet for The Living Daylights is colorful and classy, with Timothy Dalton striking a dashing pose as 007, flanked by images of the film’s highlights. 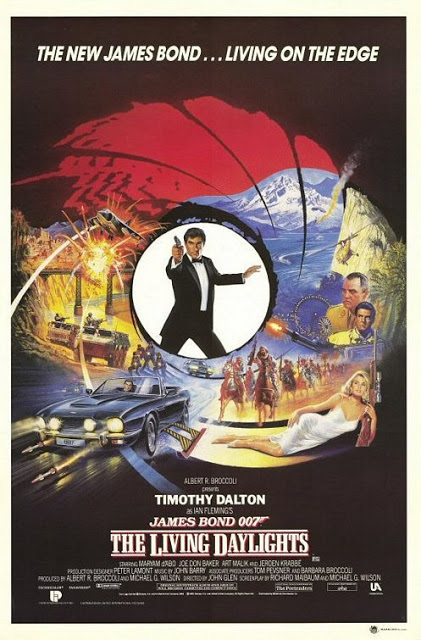 Lamest Bond Poster: Dalton’s follow-up, Licence to Kill, which looks as though it took a Photoshop artist all of seven minutes to cut-and-paste together. 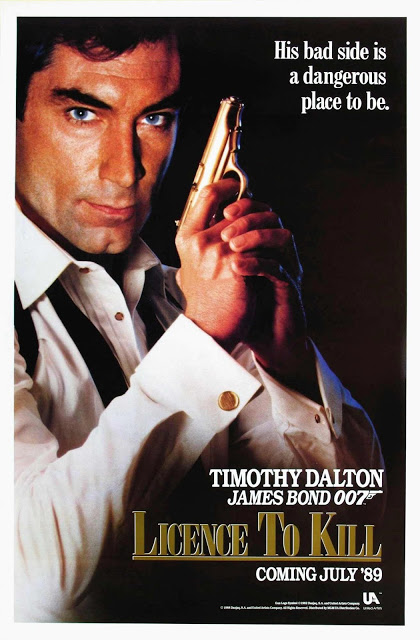 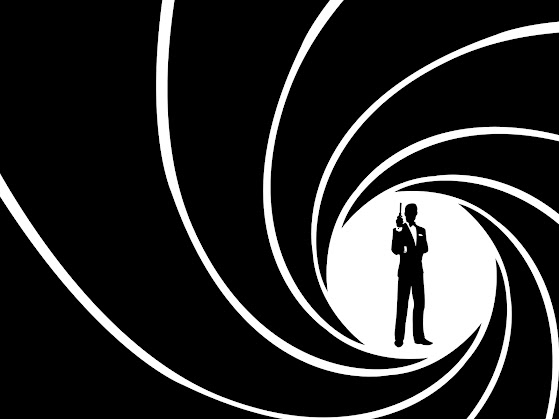