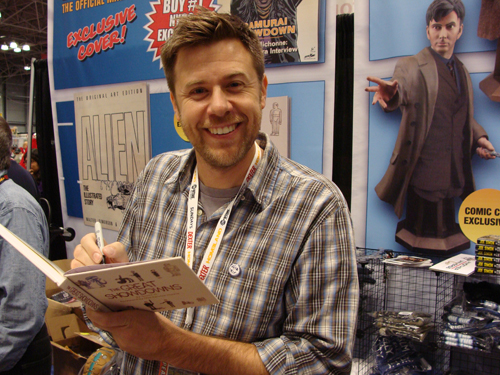 If you’re a regular reader of the site, then you know how much we love Scott C’s work.  We chatted with him previously about his book, Amazing Everything and again, after he designed the cover to our own Andrez Bergen’s book, The Tobacco-Stained Mountain Goat.

Scott’s got a new book out, The Great Showdowns which is a must have gift for any pop culture loving geek on your holiday shopping list.  Our friends at Titan Books, who published this book did a pretty good job summing it up succinctly.

Han vs the green fellow. Chief Brody vs
the very large shark. John McClane vs broken glass, and many, many
more… Scott Campbell’s acclaimed Great Showdowns series, showing
strangely good- natured confrontations between his favorite movie
characters, finally gets the book collection fans have been demanding!

Whether
it’s Ripley vs the Alien Queen or Spinal Tap vs an undersized model of
Stonehenge, these memorable moments of melee deserve to be celebrated.
Behold, The Great Showdowns.

Scott C. was gracious enough to chat with us again about his latest endeavor.

You’ve been doing “The Great Showdowns” since 2008. What was the first one that you did, and what was the genesis behind the the concept?

The Great Showdowns started with 10 little paintings for an annual show at Gallery 1988 called Crazy4Cult, a pop culture show inspired by cult films. I just started drawing characters from all my favorite movies, standing around looking at each other. I particularly enjoyed seeing adversaries standing in front of one another looking pleased with themselves. Somehow this makes them all look like they are attending the same party. The characters are just as excited to get nostalgic about the moments as we are to remember them. 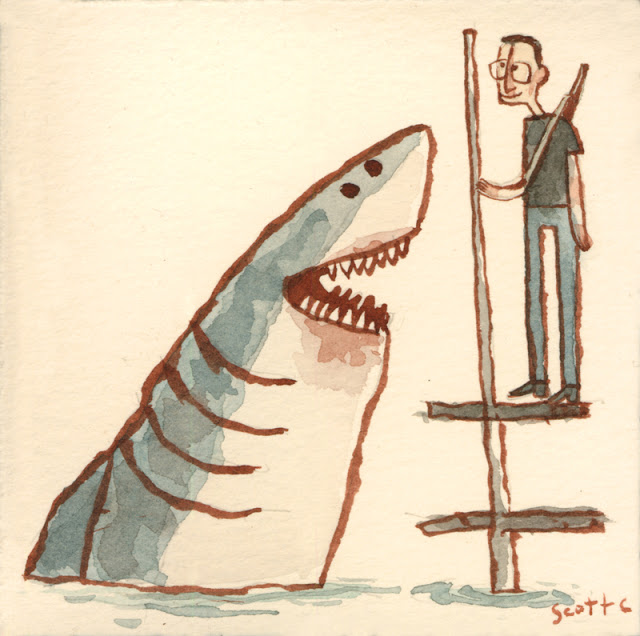 Do you have any particular favorite Showdowns?

I really like the Die Hard showdown of Bruce Willis versus the happy little shards of glass and the Point Break one of Keanu and Swayze handcuffed together, gazing upon the smiling tidal wave. But my favorite is the Ghost showdown because it is just super silly while at the same time super sexy. Patrick and Demi versus the little clay pottery dude. I guess the ones with smiling faced objects are always my favorite ones. 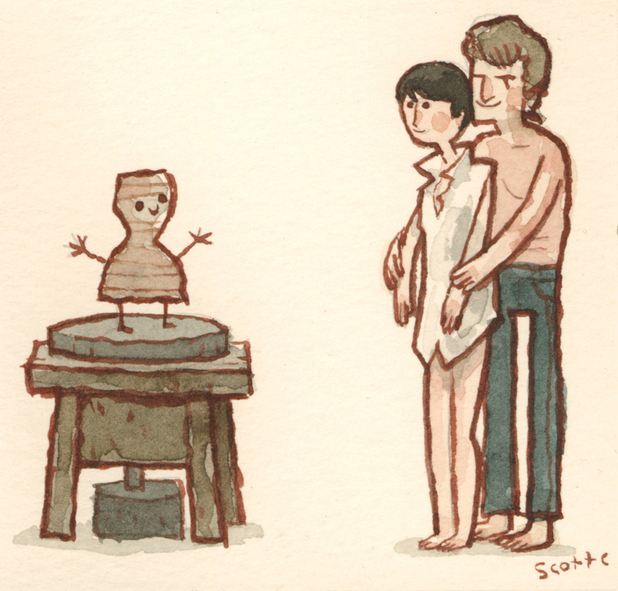 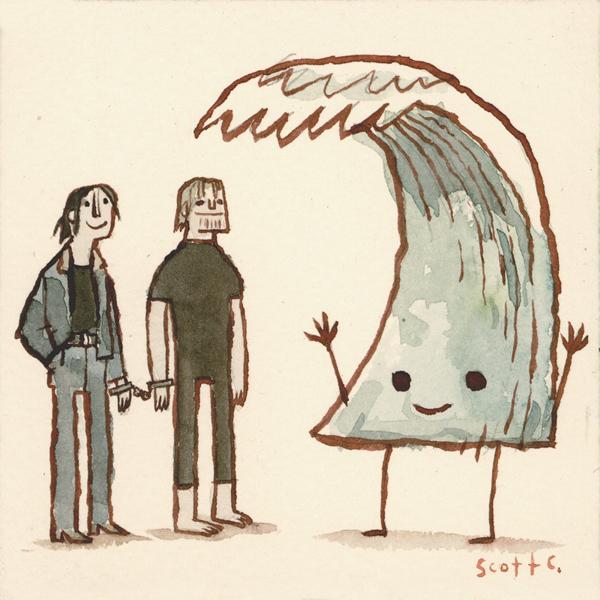 Most of the illustrations seem inspired by films. Can you watch a movie now without picturing what material you can pull from it?

I can, but I need to force those feelings back. I watch classic films for the first time because I know that I should see them and I always just try to find the good showdown moments. It is probably how a film critic feels when watching a movie, in a way.

Even though the series chronicles “showdowns” between antagonists, most of your work has the characters smiling, which I adore. Is there a particular reason why you depict the characters as being happy?

Well, no matter how terrifying or comedic the actual moment is in the film, the smiling becomes a way to bring them all to the same level on the display shelf. We feel very fond of these films, so why shouldn’t the films feel fond of themselves? 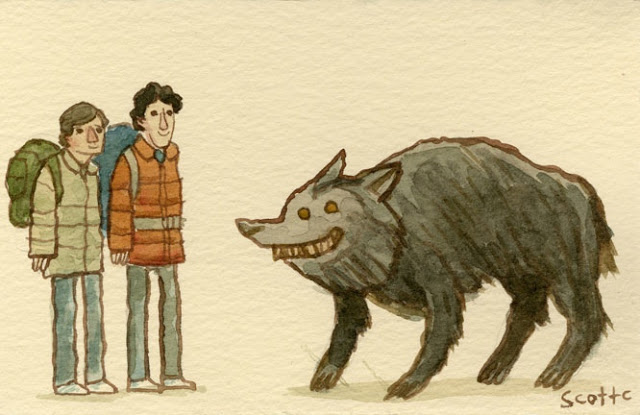 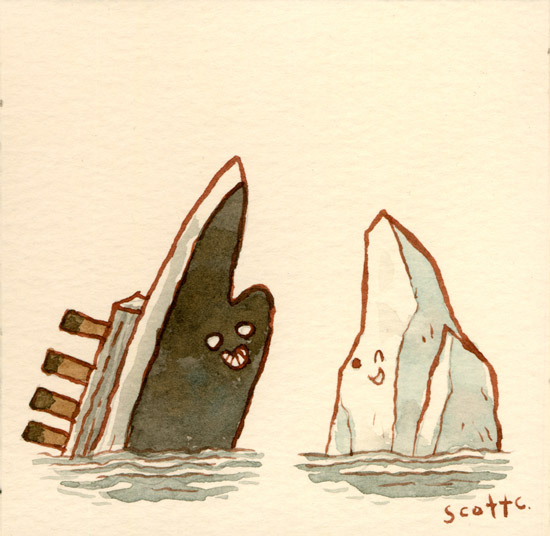 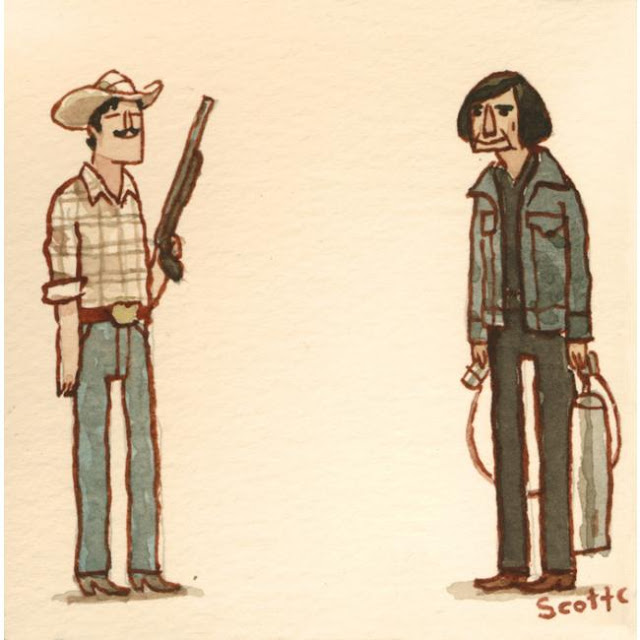 Are there any upcoming movies that you are itching to tackle or any films that you’ve always intended to do, but haven’t yet?

Oh, plenty! My list is huge and i am slowly making my way through it. I just recently watched Looper, so i will probably do one for that soon. I’ve struggled coming up with showdowns for some of my favorite films though, like Memento. Just can’t settle on one for that film.

I am beginning work on a new children’s picture book that i will write and also illustrate. A collection of my online comic Double Fine Action Comics will be released next spring from Oni Press. I need some rest though. I’ve been travelling around a lot for this Showdowns book.

I know you used to be a big comics fan. Favorite comic book storyline of all time and why?

My favorite graphic novel is The Dark Knight Returns. That was just the best storyline ever. i wish they made that Batman film. 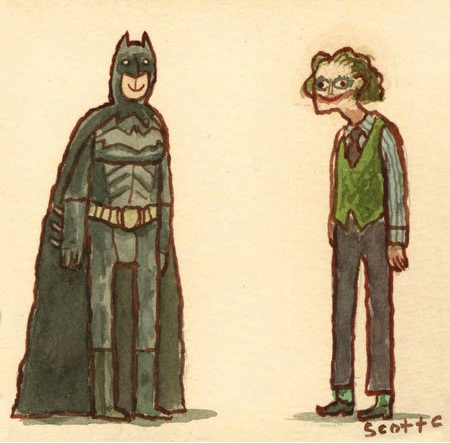 The Great Showdowns by Scott Campbell with an introduction by Neil Patrick Harris is published by Titan Books and is available now in stores and via e-retailers. 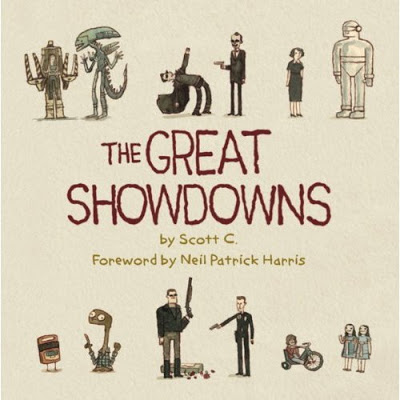