I’ve been away for a long, long while, dealing with my crazy NYC life, working on becoming a Rock Star, teaching unruly kids, and fending off lunatics on the street. But here I am, and just in time to celebrate the genius of Dick Clark!

Okay, I must be honest with you and tell you that the time now is 9:15, and I haven’t really focused much on the first hour of this mess because I’m grading Art projects for Parent/Teacher conferences tomorrow night (ugh), but I will give you a few things that stood out at me.

USHER – He opened the show, and took up almost 9 minutes with a pretty BORING performance of some songs that stunk. Lots of lasers, him running on a treadmill set at 10, and his bad haircut. He’s making all kinds of money from discovering Justin Beiber. Honey, stay home and raise your kids. 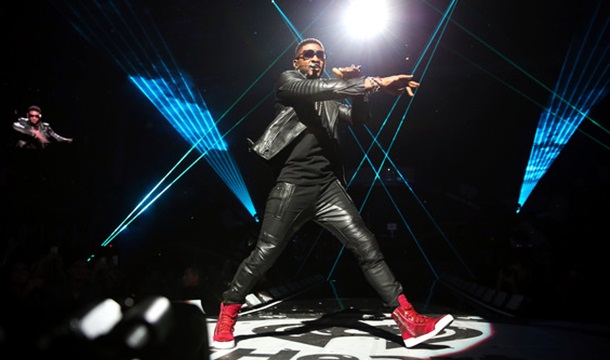 Hey, it’s that girl I’ve avoided for the past year and a half – you know, the girl who sings that damn song “Call Me Maybe.” DAMN, now my streak has been ruined. 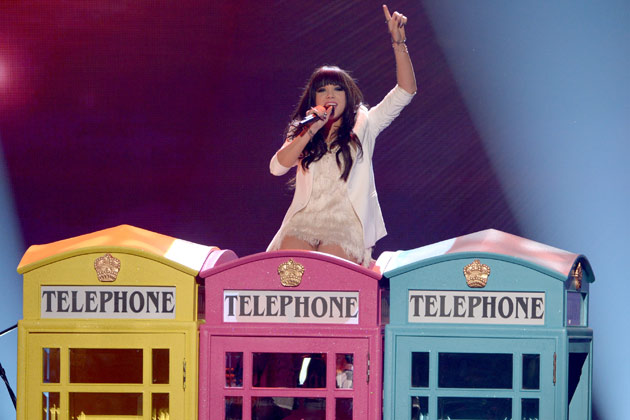 Justin Beiber really GIVES IT to his “haters.” Do people really still hate that kid? Has he hit puberty yet? Who cares? WTF is wrong with his pants? 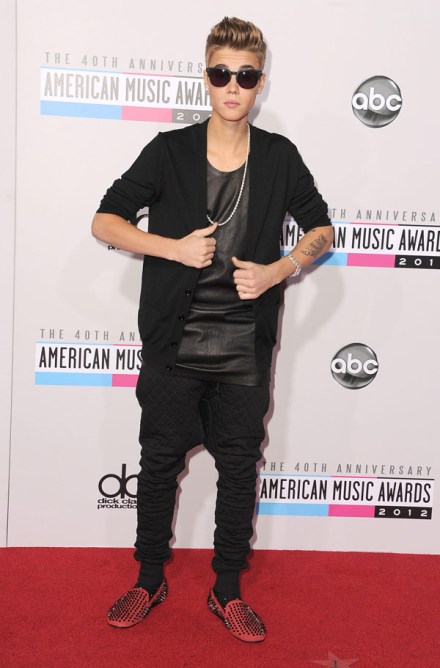 Hey, TAYLOR SWIFT WON AN AWARD! And I think she sang yet another song about some dude who broke her heart. Will she ever date again?

KELLY CLARKSON – So, it’s been TEN YEARS since she won the first American Idol. She’s putting out a GREATEST HITS CD! Whoa Dog! So she came out and did a medley of her hits.

Not that great. Nice drag though – she’s lost weight, and that outfit cinched her in and gave her some curves, which is rare because she usually looks like a rectangle.

Okay, Nicki Minaj just performed some slow song that sucks. She’s totally swaddled in white furs, with a big pink wig, and her super white skin. It’s a winter scene she’s walking around in, and all of a sudden, a Black Choir comes out and (of course) out sings her ass. YAWN.

PINK!  She had a baby not too long ago, and just did an interesting performance of a boring song. I think she should just join Cirque Du Soliel and call it a day.

Other people winning that I don’t know.

Oh, Justin Beiber is singing some horrible song, with some dude playing an acoustic guitar, oh, but now it just busted out into a big stage production with girls in red pants, and graphics that are supposed to be a thousand speakers. He looks taller. Too much AutoTune. Oh shit, here’s Nicki Minaj with a HUGE Black wig that she scraped outta Cher’s trash can. Five seconds to do some lame Rap – and she’s gone, thank you. 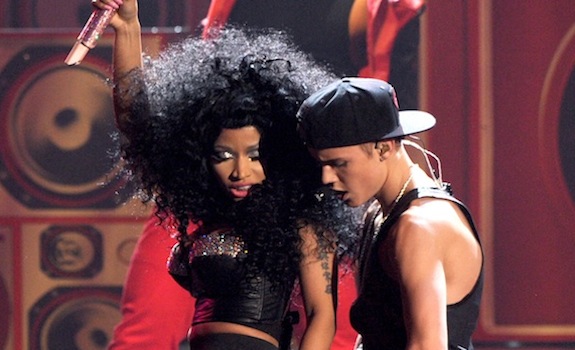 Skrillex, some other dude, and David Guetta are nominated. David won. YAWN.

Uh oh, here’s Xtina Aguilera – with a slow song, AUTOTUNE recording..oh come on girl, you can really sing! Uh oh, the set is a trailer park. Lots of hot gymnast guys in weird drag. She’s straining to hit the high notes. Her back up singers are WERKING OVERTIME! Okay, now it’s a full on freak show of stereotypical “freaks” bouncing around in a rave or something. Sheesh.

And now, Pitbull. Another boring House Music track with his lame Rap. NO LIVE MICROPHONE. And now Xtina is back to sing two lines during a lame House version of the bridge of “Take On Me.”

WHY IS CHRISTINA AGUILERA DARKER THAN NICKI MINAJ? 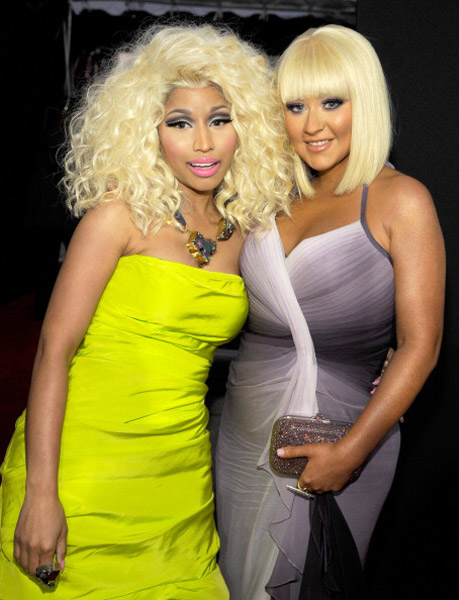 Favorite POP/ROCK ALBUM
Bieber
Maroon 5
Nicki Minaj
One Direction
THE WINNER – Justin Bieber. What the fuck is wrong with his pants? Are they Jodhpurs?

Okay, here’s Swizz Beats and Chris Brown. Jumping around to the sound bite from “Ironside.” LAME Oh, there’s Ludacris! Even he can’t save this mess. It makes me long for Puff Daddy. 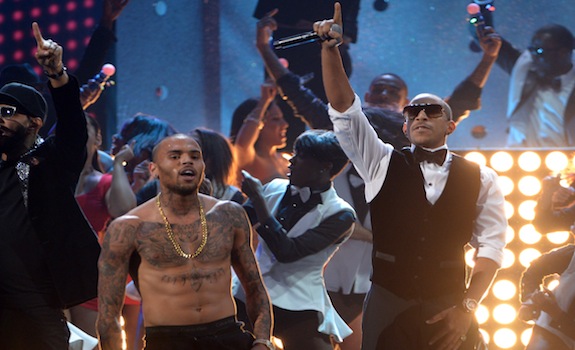 REALLY? Who in the hell is Tyga? 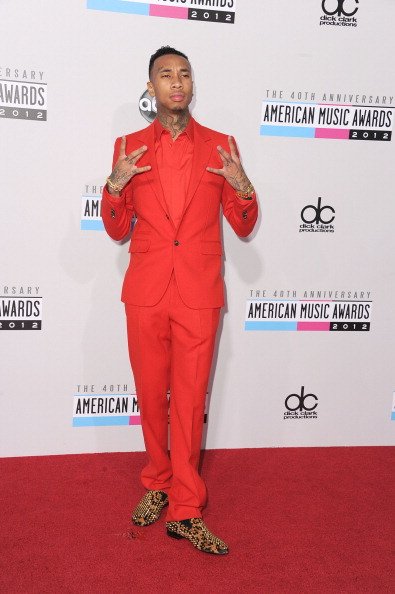 This crap is so lame, Katy Perry didn’t bother to show. Oh right, she’s not gonna win anything. I forgot how this show rolls.

And here’s Ryan Seacrest – the heir apparent to Dick Clark’s kingdom. Blathering on and on about how he loved Dick Clark.

He busts out “Jammin’ (Till The Break Of Dawn)” And there’s the photo montage of Dick through the years, from American Bandstand through last year. And now, “My Cherie Amour.”

They keep going back to Dick’s wife – she looks confused.

JUSTIN BIEBER WON. SEE WHAT I MEAN? How are all of those other people nominated and DON’T SHOW UP?

Okay, this shit is over, thank goodness – oh shit – it’s that Korean guy with the You Tube video with 700 million views. Gangham Style – oh brother this is gonna be lame BUT WAIT A MINUTE – I’M HEARING “TOO LEGIT TO QUIT!”

And, as my friend Greg said, “That’s the state of American music — the best performance was by a 90’s artifact supporting a novelty act.”

Okay, I’m off to bed now. I hope you enjoyed that JIVE TURKEY OF AN AWARD SHOW and have a great Thanksgiving this week!