It’s Sunday, January 13th, and its time for the first award show of the year, THE 2013 GOLDEN GLOBES! It’s the 70th Anniversary!

That’s right, The People’s Choice Awards DO NOT COUNT because that bullshit is a total set up. Come on, you guys know that they ONLY INVITE THE WINNERS so they guarantee them showing up, right? Well, now you know.

Anyway, I refused to watch the 18,000 hours of pre-game crap on E! And I JUST turned in the NBC “Arrivals” special, with 30 minutes to go. I got sucked into a “Mental Head Games” L&O SVU marathon on USA Network, which is tough to turn away from. 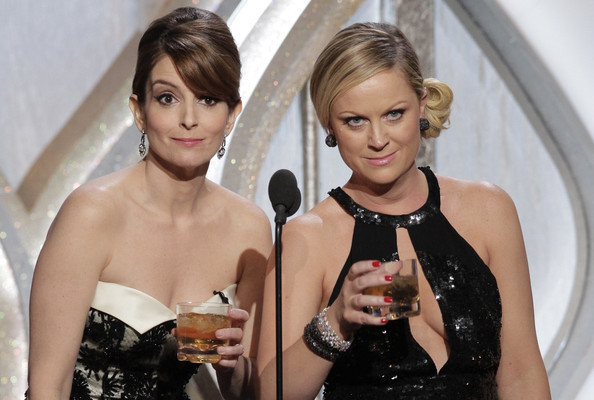 IT’S THE GOLDEN GLOBES with your HOSTS, TINA FEY and AMY POEHLER!

Tina & Amy look great! And the jokes are very funny! They took a good dig at Ricky Gervais…you forgot about him already, didn’t you?

BEST SUPPORTING ACTRESS IN A SERIES, MINISERIES, OR TV MOVIE – MAGGIE SMITH –  For Downton Abbey (I hate that name, Downton)

Oh, Amy did a funny bit, dressed up in a red wig and fake teeth, as a fake nominee, ha hahahahaaaaa.

Wow, the President of the HFP has got jokes! She hit on Bradley Cooper!

This show is kinda boring.  I wonder where Ricky Gervais is right now.

Oh look, there’s Jenny From The Block in a nice, sheer, lace, skin tight, show stopper of a dress. Guess who’s back? 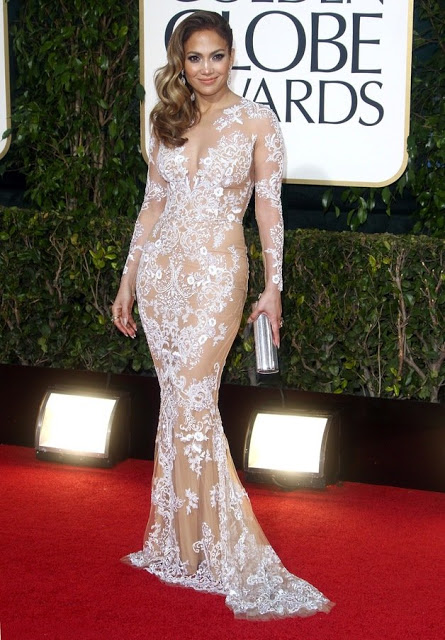 BEST ACTOR IN A TV MINISERIES OR TV MOVIE – KEVIN COSTNER for Hatfields & McCoys! His speech is weird, like he was going to announce his retirement or something.

Kristen Wiig & Will Ferrell to a great, hilarious job announcing the BEST PERFORMANCE BY AN ACTRESS IN A MOTION PICTURE COMEDY OR MUSICAL – JENNIFER LAWRENCE for Silver Linings Playbook. Great speech!

Whoops – I turned back to Law & Order for a minute, so I missed the category, but the winner is ED HARRIS – GAME CHANGE 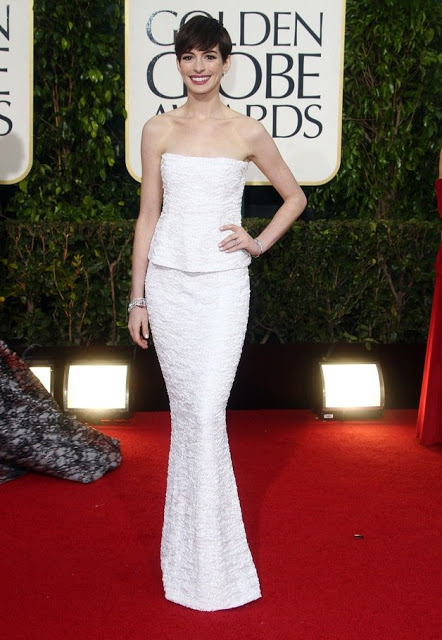 BEST SCREENPLAY – QUENTIN TARANTINO for Django Unchained – I’M PRETTY SURE HE WAS DRUNK!

BEST ACTOR IN A TV COMEDY SERIES OR MUSICAL – DON CHEADLE – For House Of Lies – I think this is on Showtime, so I’ve never seen it.

OH LOOK, IT’S BRUNO! Oh Sasha Baron Cohen we missed you!  Now he was funny and mixed it up a bit – YAY!

BEST ACTRESS IN A TV COMEDY OR MUSICAL – LENA DUNHAM for Girls! Poor thing couldn’t walk in her dress, I wonder how high her heels were.  Damn, she looks like she’s got a broomstick shoved very far up her ass – what the hell? 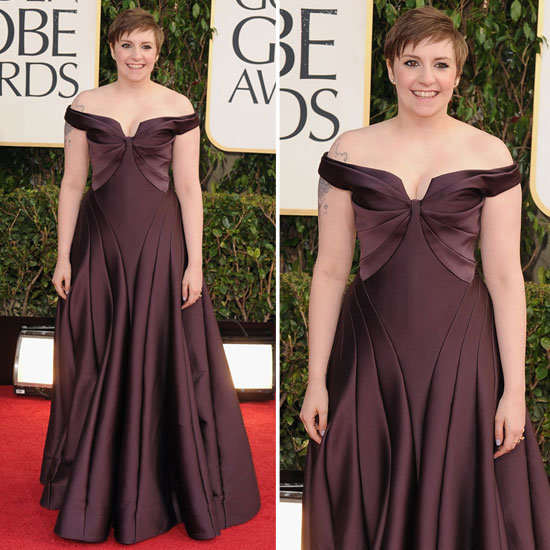 MAZEL TOV TO JODIE FOSTER – for receiving the Cecil B. DeMille award!
I must say, that was one of the WEIRDEST speeches I’ve ever seen.

BEST DIRECTOR OF A MOTION PICTURE – BEN AFFLECK FOR ARGO! SUCK IT OSCARS!

TOO MUCH SIDE BOOB!  PLEASE STOP IT
This was a BIG trend last night.  So big, that I can’t post all of the photos of all the women who were very offensive to me.  But here’s the worst offender – KATHERINE McPHEE 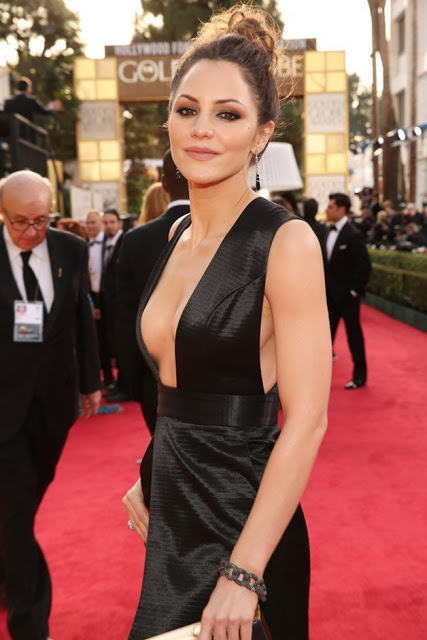 CHANGE UP YOUR LOOK ALREADY!
I’m talking to YOU Halle Berry.  Could you please stay off the lavender, and flowers, and blah? 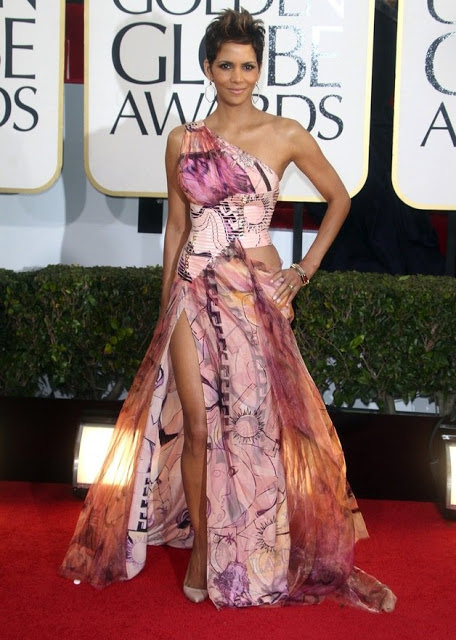 WHO STOLE ANGELINA’S DRESS?
Eva Longoria did.  That’s who. 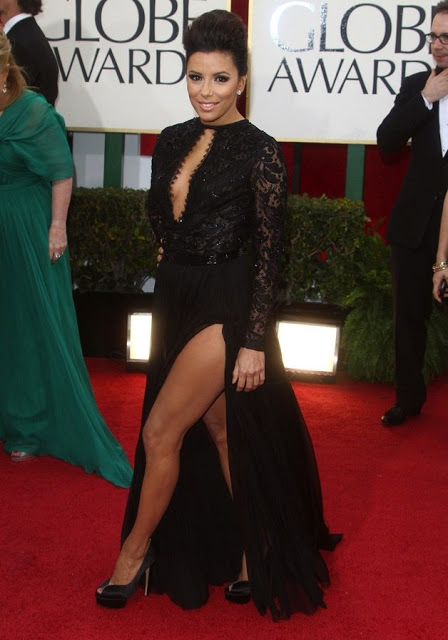 WHO THOUGHT SHE WAS A DISNEY PRINCESS?
Julianne Hough.  That’s who. 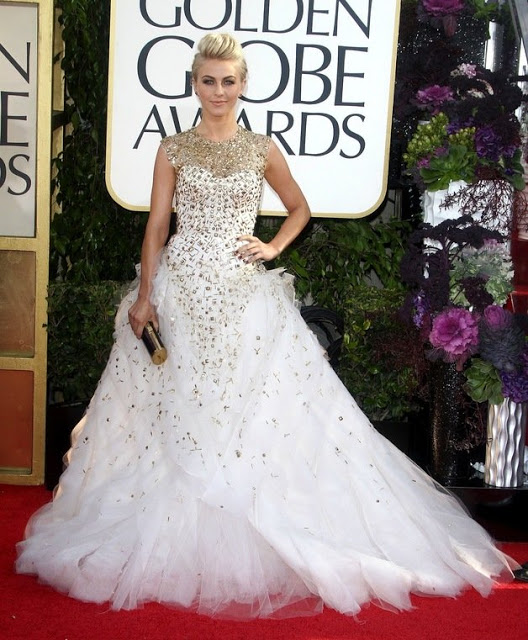 BEST DRESS OF THE NIGHT
It was Lucy Liu in this Carolina Herrera stunner!  For some reason I love it AND hate it at the same time, so she wins! 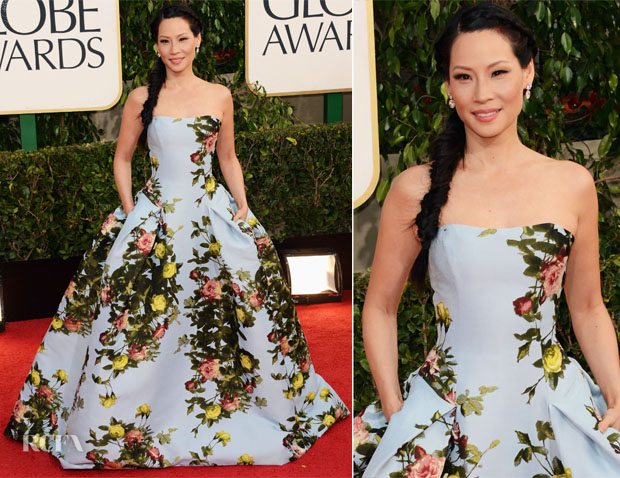 So, that’s it.  The show could have been better, though Tina and Amy did a good job.  Blah.

See you at the Oscars!