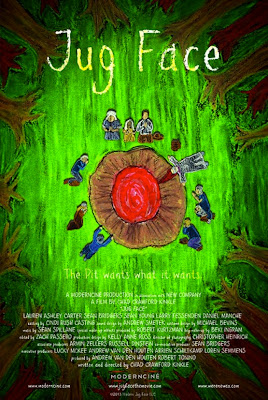 An intriguing if ultimately undernourished horror outing from first-time helmer Chad Crawford Kinkle, the awkwardly titled Jug Face is NOT a spoof or even a comic/horror tale along the lines of Tucker and Dale Vs. Evil. It’s a mostly straightforward, simple story of a group of backwoods families who are beholden to an evil deity known as the Pit – as that is where it apparently resides.

To be fair to said deity, as long as it receives a sacrifice every now and then, it leaves the families well enough alone, and in fact will even cure ailments if all is well in the balance of things. The sacrifices are decided by a spellbound pottery-maker, Dawai (Sean Bridgers, who’s very good), who under the whim and influence of the Pit, makes a jug from clay embroidered with the visage of the next victim.
When young Ada (Lauren Ashley Carter) discovers the next jug has her face on it, she panics and hides it in the woods. This sets in motion a string of grisly events among the families.

Kinkle does a decent job of making the families’ lives and beliefs credible. They aren’t raving religious fanatics, they’re just resigned to the reality of having to appease the Pit to survive. Solid actors like the always-welcome Larry Fessenden (director of the terrific Habit and Wendigo) and Sean Young (!) bring extra credibility to the proceedings.

Also, it’s a nice avoidance of cliché to see these events almost exclusively from the inside. The usual set-up with backwoods horror is to have an outsider arrive in the community and slowly discover the horror of the situation. Our protagonist here is a girl who’s lived her entire life here and is then confronted with the true horror in a very personal way.

Which is all well and good. But by NOT having an outsider protagonist, Jug Face loses a bit in the suspense and scares departments. It’s basically: Set Up, Consequences, Resolution. Nothing wrong with a simple storyline (hey, the original Wicker Man was pretty straightforward, but packed a wallop), but the tone and approach are a bit problematic.

Despite the earnestness of the cast and some genuinely severe consequences, Ada’s plight has the feel of a ne’er-do-well teenage girl who pulls a stupid prank, fails to take responsibility, and spends the rest of the film lying and concealing her mistakes. Even with several gory deaths and nasty punishments, Jug Face never quite reaches the nerve-wracking, dramatic heights that it really should have.

Bottom line is that we’re never quite scared for Ada, and we should be terrified for her.
Also, there are several visions that Ada has of the deity claiming a victim that come across as a bit cheesy and ineffective.

I think the major issue here is the lackadaisical pace. Even at 84 minutes, Jug Face feels rather slow and thin. There’s really enough material here for a nifty, half-hour short, so at three times the length, it just doesn’t work.

Still, not a bad first effort by any means. Kinkle will most likely make some good horror films sooner than later, and Jug Face is a very flawed, but hardly unworthy start.