The third season of Buffy the Vampire Slayer is considered, along with the second, to be the show’s shining hour. One of those reasons came from the season’s main antagonist: Mayor Richard Wilkins III, an immortal demon worshiper who wished to join those ranks by ascending into a monstrous form.

He appears throughout most of the season as a human antagonist, but his slow transformation into something completely other (as well as his behavior in both) elevates him to monster status in my book, so we’re free to talk about him here. 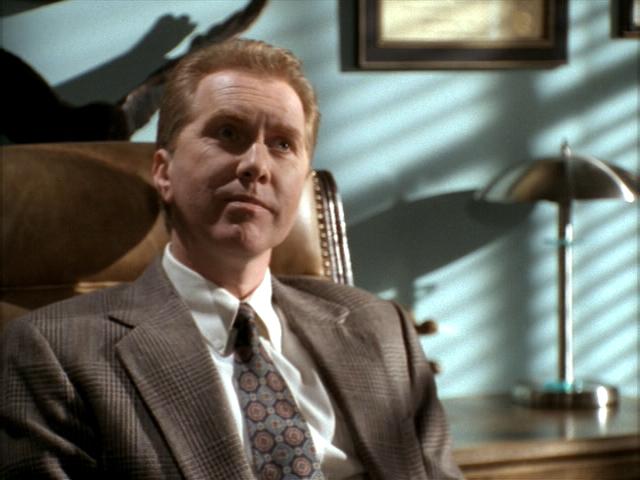 Biology
In the Buffyverse, there’s a scale of horrible things that can be arranged by potency: there’s Half-Demons like Vampires (which for them is a demonic spirit animated a corpse); demons like the Sisterhood of Jhe, Vahral and numerous others; there are True Demons, which are large monstrous beings with a wide variety of forms; then there are the Old Ones which are godlike beings of monstrous insanity and power.

The Mayor wanted to turn himself into a true demon. He built Sunnydale specifically to foster his eventual goal, willingly sacrificing the high school students to maintain the transformation. The demon is a beast called Olvikan: a giant serpent with armored head, back and thagomizer. 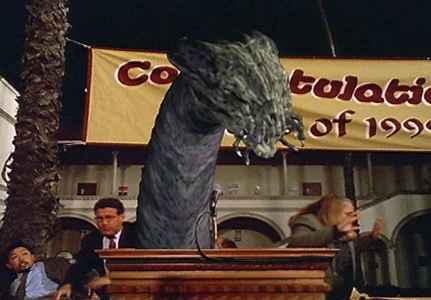 Let’s start at the head. It’s covered in thick armor, has horns on it and, if it were a proper species, would indicate a head ramming/butting contest would occur amongst males of the species. The most interesting thing, however, is a series of small segmented ‘teeth’ which are around the mouth. These would be used in life to guide food into the mouth or perhaps for digging food out of hard to reach places. It shows no indication of having a hinged jaw like a proper serpent, which means it, specialized in eating smaller organisms (like people).

The body is long and has a row of spines down its back for armor. This may be to reinforce the body from the head ramming/ body blows mentioned above, or it may be to protect it from predators (as hard as that may be to conceive).

And at the very tip of the creature’s tail is a thagomizer. The word is used to describe tail spikes and clubs found primarily on ankylosaurs and stegosaurs. I love the word thagomizer. First of all, it’s fun to say. Second of all, it comes from one of my favorite comic strips: The Far Side. 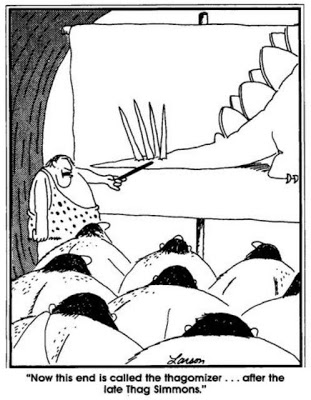 The Mayor uses it to defend himself during his monstrous appearance, killing off a recurring character in the process.

The monster itself is as strong and tough as any demonic creature over fifty feel long has a right to be.

Buffy ended up blowing up the entire high school just to of the monster. His last words?

Even with the new mouth and body, he could still form proper words. An odd thing, really, as a lot of the human head and face are dedicated just to the variety of sounds we can make. Still, what’s the point of being a giant monster if you can’t talk or lose your intelligence along the way.

Symbolism
The Mayor himself is a perfect corrupt father figure. He is a very Norman Rockwell sort of guy. Just imagine if someone was raised to think the way people behaved on Leave it to Beaver or The Andy Griffith Show was a demon worshiping guy bent on becoming a giant monster and that’s the best way to summarize him. It really emphasis his evil when it contrasted his cheery demeanor.

As the Mayor, he is the town’s true father figure, but it is his relationship with the rogue slayer Faith which really hammers home the corrupt father aspect of him. He genuinely loves the girl as a father and treats her better than anyone has before. It’s a very sweet relationship for all its evil.

The transformation does little to dispel the symbolism of the character. 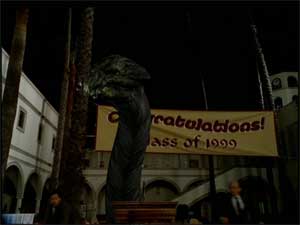 Aside from the Freudian things we can talk about with a male character becoming a giant phallus, the serpent as a symbol is quite potent and relates to the ‘human’ he was before the transformation rather well.

It’s also one off the most symbolically potent of all animals. The color scheme of Olvikan ties it to the earth it appears to ‘grow’ from (serpents, crawling on their bellies, are believes to be closer to it). It’s a well-known symbol of evil in the west, it is also a symbol of healing and regeneration.

The Mayor himself was immortal, and he provided a stabilizing or healing aspect to Faith’s life (as wrong as it was), so we retain that part of it.

The final bit of pertinent symbolism comes from the snake-as-wisdom side of the coin.  The Mayor is many things, and wise is one of them. His intelligence, foresight, planning and advice to his allies is usually pretty on the mark and helpful—except when he’s being too Norman Rockwell or mysophobic.

He’s the only big bad villain who tells his vampire minions not to swear when they’re ensuring the slaughter of teenagers.

And that’s why we love him so.