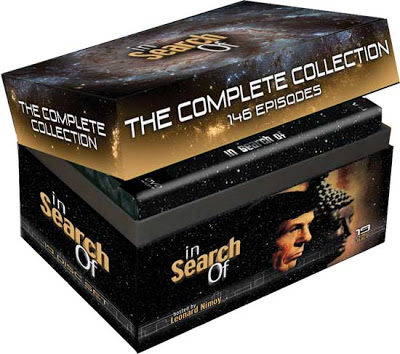 The late Seventies through the early Eighties was a pretty remarkable time to grow up.  It was the last time that science was synonymous with cool and adventure.  With In Search Of, Mutual of Omaha’s Wild Kingdom, Carl Sagan’s Cosmos and episodes of The Underwater World of Jacques Cousteau, you’d be hard pressed not to get enthusiastic about the world around you.  Wild Kingdom, Cosmos and The Underwater World did a great job educating and entertaining, but In Search Of did something else; it scared us, it excited us and it taught millions of young viewers to question the world around them.  It’s a historical precursor to The History Channel, Animal Planet, etc.

For viewers, In Search Of was unlike anything else on television at the time; investigations into the controversial, the shocking and the paranormal. The episodes run the gamut covering everything from earthquakes to UFOs and all are presented with the same level of seriousness.  During it’s six season initial run, the variety of the topics covered included cryptozoology, religion, history, biographies, natural history, science speculation and more.

This past holiday season, Visual Entertainment released one of the most important DVD releases of all time, In Search Of…The Complete Series.
Debuting in 1976 and running through 1982 (with a resurgence briefly in
2002), the box set includes all 144 installments and the two Rod
Serling specials, In Search of Ancient Astronauts and In Search of Ancient Mysteries. as well as all 8 episodes of the 2002 incarnation.

Although much of the information within is dated, in many ways it enhances the charm of the material.  Visual Entertainment has assembled a set that not only is nostalgiac, but also truly a wonderful kitschy time capsule.  Leonard Nimoy is fantastic, lending a scientific authority (thanks to Star Trek) as the series’ host.  Later episodes with host Mitch Pileggi are good, but a bit too polished and indistinguishable from similar programming at the time.  Also included are the two original tv specials hosted by Rod Serling and a small featurette with Nimoy.  The music which I found unsettling as a young viewer is intact and is as wonderfully creepy as ever.

As I’ve mentioned many times before, nostalgia is dangerous.  I’m happy to say that there were no disappointments in In Search Of…The Complete Series.  It’s one of the most fun and entertaining releases to ever to find it’s way to DVD.