When bodies start turning up along an isolated stretch of road, they – especially Brian – become obsessed with finding the killer. 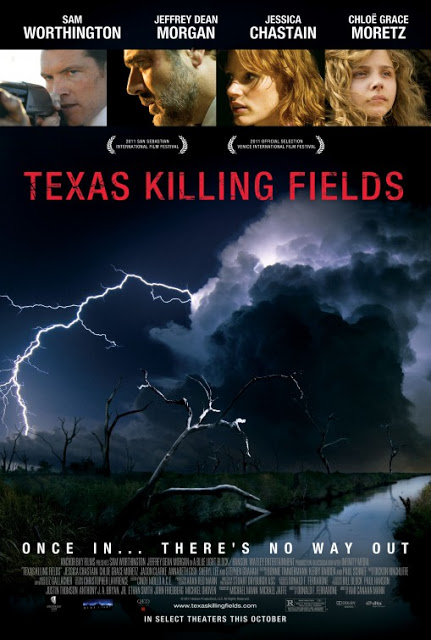 Verdict
I’m not sure how a move can be tense and limp at the same time, but somehow director Ami Canaan Mann (daughter of Michael Mann) pulls it off.

First, let’s acknowledge that we are talking about a movie based on actual events. While the police have some leads, the investigation is ongoing.

Actual events, and the desire to be faithful to them, often hamstring movies based on them. Real life doesn’t have a three-act story structure. In real life, the good guys aren’t always good guys, and they don’t always win.

Texas Killing Fields meanders around for awhile, telling us the story of the cops and the victims, introducing a young woman (Chloe Grace Moretz, Kick-Ass) and the unstable men in her life (played by Jason Clarke and Stephen Graham).

In a mystery novel, if the author is playing fair, the criminal is always one of the first characters introduced. If you read a lot of mystery stories, you become accustomed to that convention whether you are aware of it or not.
That can make true crime stories feel out of focus, or jarring.

The criminal may not appear at all until the last act. The motivations for the crime may come out of left field. The crime resolved in the end may have seemed like a minor or secondary plot thread up to that point.

Some true crime movies spend a lot of time getting into the criminal’s head, and showing the crime or crimes from the criminals perspective. We see how the criminal reacts to police activity. We may even see the police interview the criminal, not realizing who he or she is.

At the same time, the true crime movie takes us through the police investigation. We see the police react to the crimes. We see them uncover evidence, knowing all the while which pieces are red herrings and which point to the real culprit. A skillful director can frame it as a cat-and-mouse story, ratcheting up the tension until the final arrest or shoot-out.

Unfortunately, while Texas Killing Fields has good actors, great scenes, and beautiful cinematography, none of it is strung together in a way that builds to a climactic, cathartic, moment. The chase is on, and then it is done. The anticlimactic shoot-out may be more true to real police work, but it doesn’t satisfy as a movie.

Overall
Considering that this is Ami Canaan Mann’s second feature film, it’s spectacular. And I applaud everyone involved for shining the spotlight on the real-life murders. I hope that enough people will see the film to finally provide the evidence the police need to solve the crime.

But if you are looking for a good murder mystery, this isn’t it.