Ever wonder what would happen if some of your favorite characters from Film, Television, and Video Games were thrown together for a night of cards?

But thankfully the fine folks at Telltale Games have done the wondering for you, and the result is a mostly positive affair.

As “The Player” you find yourself at The Inventory — a secret club built under a video game storage facility that is home to endless tournaments of Hold ‘Em; Texas and Omaha — going toe-to-toe with Brock Sampson (The Venture Bros.), Claptrap (Borderlands), Sam (Sam & Max), and Ash (The Evil Dead).  With Portal’s homicidal A.I. GLaDOS controlling the action as the dealer. 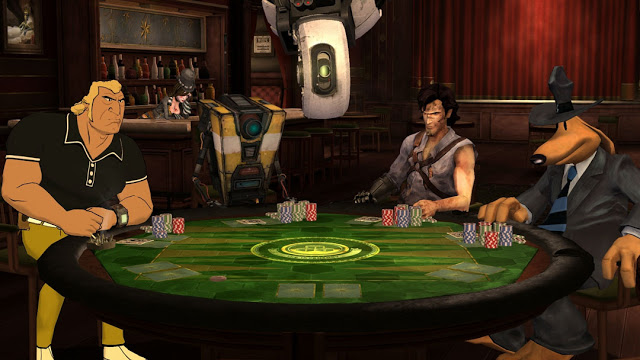 Though this is a simple, straight-forward poker sim that would easily be lost amongst the better ones out there, the playful banter and amusing interactions between your opponents gives it its own identity, and it’s a entertaining one at that.

Unfortunately, its greatest strength is also its Achilles heel.  If you end up playing for an extended amount of time, repetition (of dialogue and animations) slowly seeps in and indubitably deadens the pace, having you reach for a “skip cutscene” button that isn’t there. 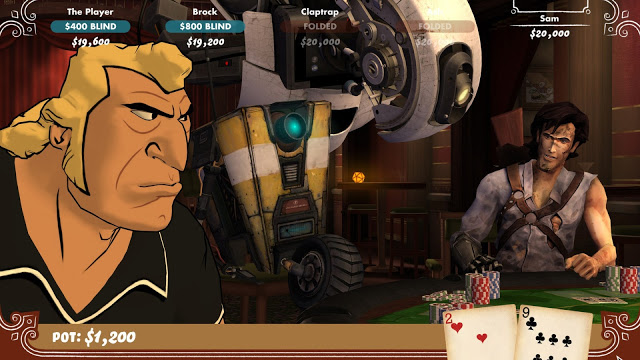 But the incentive to soldier on exists in the form of Avatar Awards that can be unlocked by winning tournaments in which one of your opponents puts up his or her “bounty” item.  (My personal favorites being Ash’s Flying Necronomicon Pet and GLaDOS herself.)  And Character Specific Themes that change the surroundings when you purchase matching deck, chip, and felt sets using in-game coins earned by finishing near the top in tournaments.  They’re worthwhile and will simultaneously garner you some achievement love if that’s your thing.  (All told, there are 18 to be had, worth 400 points.)

Poker Night 2 is an enjoyable romp marred by somewhat shaky AI that can’t quite take the place of playing against a real person, especially since it’s strictly a solo affair without the luxury of online multiplayer or co-op.  But for the casual, short burst, time-killer crowd, that’s not going to be an issue.  It’s solid fun with some great unlockables, especially if you’re a Borderlands 2 fan. 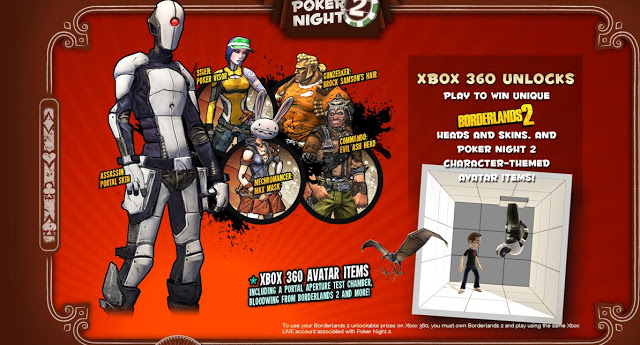 And though the voice acting of Bruce Campbell as Ash is sorely missed, this one still gets a RECOMMEND.