ShareTweet
From The Deep End to Bee Season, filmmaking partners Scott McGehee and David Siegel tackle uncomfortable, and at times, controversial material.
As an only child of divorced parents, I was intrigued to screen the duo’s latest film, What Maisie Knew, about a little girl (newcomer Onata Aprile) who becomes both pawn and bargaining chip to her bickering, pre-occupied parents (Julianne Moore, Steve Coogan).
I talked to McGehee and Siegel about how and why they tackle the subject matter they do, the challenges of adapting others’ material, and the differences between directing children and adults.
FOG!: Who and what are your filmmaking influences?

Scott and David: We both came to filmmaking because of formal interests, as opposed to, say, from an interest in performance. That’s obviously shifted greatly as we’ve continued to work together. But we still try to bring our aesthetic and stylistic interests to bear on the emotional heart of our films; through framing, set design, the use of a musical score and light.

Early in our time working together, we spent a lot of time watching post-war American melodramas and they were a big influence on us both narratively and cinematically.  We think that they tend to inform not just a lot of our work but things that we gravitate toward—even when they are more genre-oriented like The Deep End.  We really approached that as a melodrama, not as a thriller.

And, of course, there’s a lot outside of filmmaking that influences what we do.  Art and architecture, nature.

FOG!: All five films you have made together have been regarding heavy subjects. What draws you to such emotional and even controversial material?


Scott and David: The five films we’ve made are simply the five that got to the finish line.  There are many more that got close, but failed to move into production for one reason or another.  Not so sure the narrative would look the same if we had managed to make them all.  That said, we’re definitely drawn to stories that are emotional, and ones that challenge our sense of our own identities.
How is adapting a film different than writing a “new” one?

Whenever we are talking about what to write or if we are reading a script that someone else has written, we always look for the emotional hook. What are we going to care enough about to stay interested in and what’s going to make an audience care about some of those same things? For us, the best action films, the best thrillers, are always built around something that really tugs at your heart in some way, some dilemma that is emotionally wrenching.

As for adapting, we’ve done quite a bit of it and really enjoy the process.  You’ve got a spine of a story to lean on, and characters that are often different from one you yourself might have dreamed up.  You get to crawl into someone else’s head, and somehow make part of him or her your own.

FOG!: How important is it to be faithful to the original material? For example, the novel of What Maisie Knew took place in a different time period and the ending of the book varies from that of the movie.

Scott and David: We’ve come to believe that faithfulness in filmmaking should be directed to the audience.  Making sure that you’re creating something that will be richly rewarding and challenging and fun for them.  If you fail to do that, no one will care if you were “faithful” to the original source material (whether that be a classic novel, or a brand new screenplay.)

But to be honest, we thought of What Maisie Knew less as an adaptation than a riff on the novel. The original mom in the novel is a billiards shark, for example; by the time the script was sent to us, she’d already been changed to a rock star.

FOG!: What specifically drew you to What Maisie Knew? And how do you find what material you want to be influenced by/base your films on? 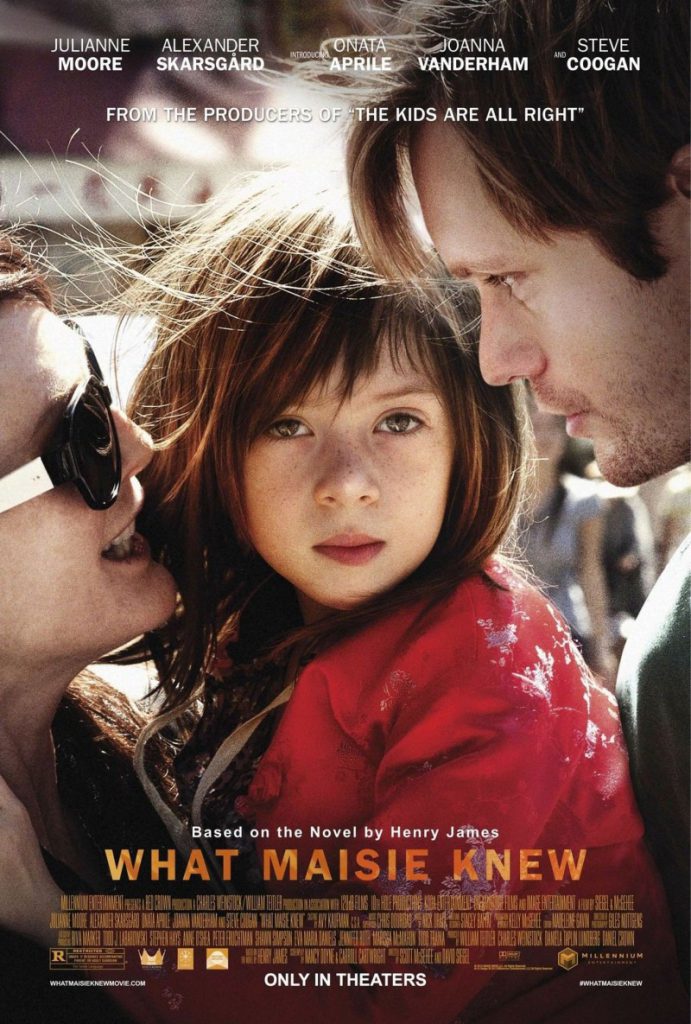 It was the idea of telling a story from a child’s perspective that really hooked us.  It seemed like an exciting challenge, something you don’t see very often.  And the attempt to sculpt the experience of a child was rewarding right from the get go.  It pushed to reconsider all the fundamental aspect of making a movie; not just the framing devices around the child’s perspective, but the way the rest of the world is framed, as well. And the sound and music and costuming, too.

FOG!: What are the pros and cons in working with children?

Scott and David: We approached this movie with a certain amount of trepidation, because there was a six year old at the center of the film, in every single scene. That presents challenges on set, in the regular set work, but also logistical challenges. It shortens your day. There’s only so many shots in the movie that she’s not in, so when her day would end there wasn’t a lot of work for us to do. We weren’t sure how that would work. We managed on the logistical side. It was hard on our budget, but we managed fine.

FOG!: How do you split the directorial duties between the two of you?

Scott and David: We really do it all together.  Our roles are slightly different on set, but all in all, it’s a one hundred percent collaborative relationship.  Neither of us went to film school, and when we began working together we were very ignorant about the way movies actually got made.  So there was no one there to suggest we share our responsibilities in any particular way.  It forced us to reinvent the wheel to some degree, but it also allowed us the opportunity to develop a creative process that’s only gotten stronger over the years.

FOG!: What was it like working with Julianne Moore, Alexander Skarsgard, and Steve Coogan?

Scott and David: We were very excited by Julianne’s interest in the movie because it was hard to think of anyone that could play the role of Maisie’s mom better. Meeting with her and deciding to take a stab at the film…that was a big deal. We sort of built the rest of the cast around her. 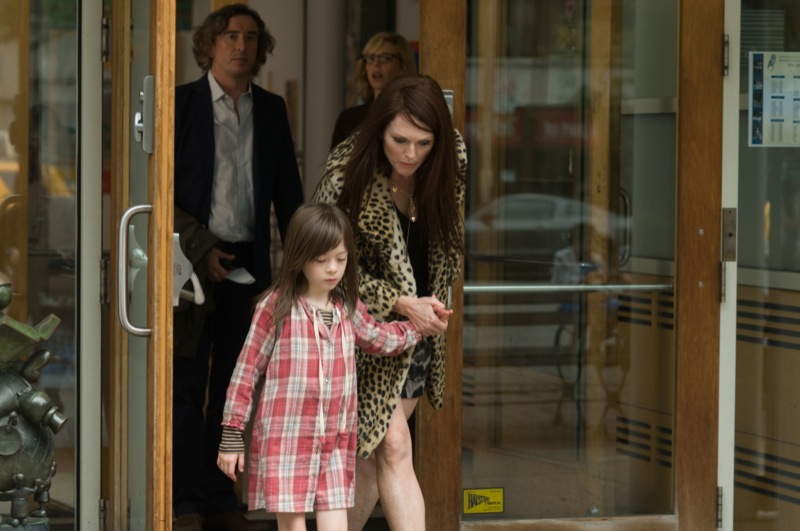 Steve Coogan was the first person we thought of for Maisie’s dad. His agent had read the script already, so there was a meeting of the minds right there. We had to do a little convincing because it would have been easier to finance the film if we had a bigger star in the role, but we thought he was exactly right.

Alexander was a leap of faith for us because we hadn’t seen that much work from him. He was much gentler in person than what we’d imagined he’d be from watching him act.


FOG!: As directors, do you “direct” each actor differently? I know actors all have different approaches to their craft — not to mention temperaments — so how do you direct such varied talents?

Scott and David: Don’t think we’d say that we approach one actor so differently from another.  We’ve been lucky enough to mostly work with very experienced and talented people, so the process isn’t so mysterious.

FOG!: How do you direct a child? I assume there is a different approach than with adult actors?
Scott and David: You know, with this particular child (Onata Aprile), she was only six years old, so she’s not an actor who’s had lots of training or experience, or who has a particular kind of technique – she’s a purely natural, instinctive actor. She required the kind of guidance that provided a good sense of what the concrete realities of each scene were.  Direction that was more like “OK Onata, now we need you to do this and now we need you to do that.”  (Frankly, that isn’t so different from how we go about things with the grown ups.)  But Onata really is a terrific natural actress, and her performance really is hers.  We didn’t create that in the editing room.  It was an amazing thing to watch.  She’s extraordinary. 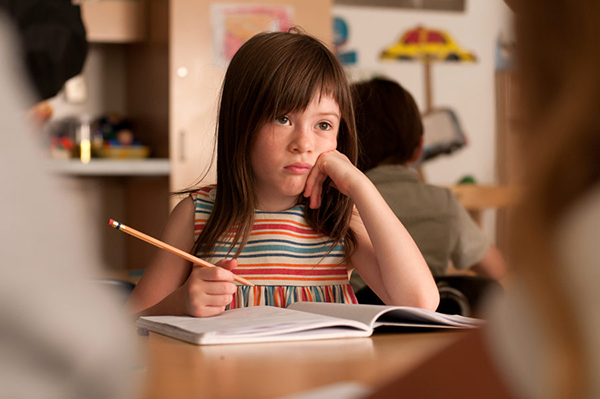 Her mother Valentine was a tremendous help, as well.  Especially in preparing Onata for each day’s work.  She was great at explaining the story and the emotional stakes within it, and making sure Onata was comfortable with the material, and understood what was going on. Onata had a good grasp on the whole story before we started, but day-to-day filmmaking is very incremental, and things get shot out of order, and pieces of scenes are done and then we come back to them later. So keeping it all straight for her was important, and Val was a big part of that.

Scott and David: If anybody starts coming off like a villain, the film doesn’t work. It’s not about assigning blame. We talked with Julianne and Steve early on about the importance of not losing sympathy for these characters; though there’s a good deal of horrible behavior going on in how they deal with the disintegration of their marriage and their personal lives, there’s a fundamental love they both have for this child. That doesn’t go away even if their relationship with each other does, and we really wanted viewers to feel that, selfish or not, these two people have a bond with Maisie.

We hope the film conveys an experience even more than it does the particulars of the story.  That was our goal.  Not to say anything particularly dogmatic or educational about divorce or childhood, but to tell a story (this story) in a way that allows an audience to come away feeling like they got inside the head of a character.  A six-year-old girl going through a very trying moment in her life, and figuring some things out.

We also wanted the film to feel uplifting by its conclusion.  Not in the sense that it has achieved a happy ending, but more that something positive has occurred that will allow our characters to move in life in a different way.  Especially, of course, Maisie.  That she’s taken a step, that she’s moving forward, that there is life ahead of her.

FOG!: Any upcoming projects you’d like to tell us about?


Scott and David: We’re working on a couple of bio pics, which is new for us.  We’ve never really tried to create a movie from the life of someone who actually lived.  It’s been fun.

Scott: Trac Vu.
What Maisie Knew is now available on Blu-ray and DVD