This February British publisher Com.X releases a supernatural murder mystery in the midst of the Rastafarian movement in Jamaica, Duppy ‘78. 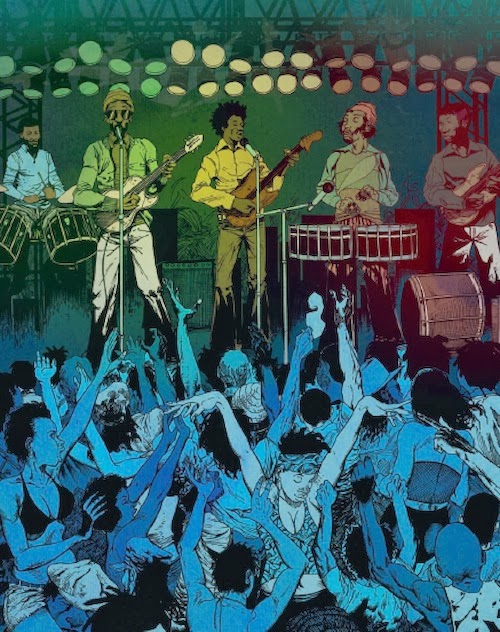 FOG!: Hi Casey, thanks for joining us today! What exactly is a Duppy Conqueror?

Casey Seijas: In Rastafarian culture, a Duppy is a ghost that can be benevolent, or more often than not, mischievous or even able to inflict bodily harm. A Duppy Conqueror — who’s also called an Obeahman — has the ability to control Duppies, so they can defend against them, chase them away or set them upon people.

I come to this era in Jamaica by way of The Clash. Besides the obvious callout to Marley, what’s a good soundtrack for this comic?

Yes! I’ve been waiting for someone to ask me this!

I listened to a ton of old school dancehall, reggae and dub (not that Skrillex nonsense, I’m talking Lee Scratch Perry style here) while researching and writing this.

In your research about the spirits in the region, how much Voodoo is in the Rasta traditions?

You know, I’m not entirely sure, if only because I mostly studied up on Rastafarianism and Obeah when I was working on this story, and not so much Voodoo culture and beliefs, so I don’t think I can answer this one without quite possibly saying something wrong. From what I gather, they are two separate entities, but have some similarities. 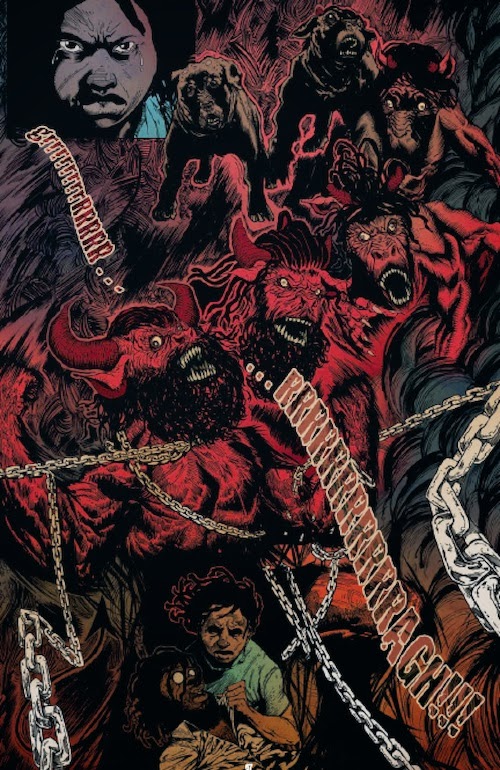 How were you paired with your amazing artist Amancay Nahuelpan?

I first saw Amancay’s work back when I was working at Vertigo — he was doing a comic for the Zuda line called Clandestino and it was crazy. I love the South American style of comic art — guys like Eduardo Risso, Marcelo Frusin, Leo Manco and Enrique Breccia — and he was definitely a product of that style, so when it came time to find an artist, Amancay was one of the first people I asked, and luckily for me, he came on board. He was great to work with — he has a sincere passion for the medium, nailed all of his deadlines like a true pro, and continues to practice to get better and better at his craft.

I also want to make mention of Daniel Warner, who came on as our colorist. He’s been a fixture on the independent comics circuit for a while now and I’ve known him going back some 10, 15 years now, and he really brought Amancay’s work to life and rocked it. I’ve said this elsewhere, but I owe these guys, like, a million drinks if and when I see them at a comic convention.

Was Com.X an ideal place to pitch this book for you? What makes this a good fit?

It was the perfect fit! I’ve known Eddie Deighton at Com.x for a long time now, and have always been a fan of Com.x’s books like Cla$$war, Bazooka Jules, 45 and Seeds just to name a few. Com.x always seemed to offer up books that were slightly different — the types of stuff you’d see being pitched at larger publishers where they’d be all, “It’s an interesting idea, buuut…”

Com.x takes risks. Not to mention, the finished products are always amazing and well-packaged. So yeah, when it came time to pitch, they were literally the first people I thought of, and luckily for me, they said yes to the proposal.

When it came time to actually put the project together, they were not only patient with the process (it’s taken several years to get this book completed for various reasons), but also in terms of editing the book. Both Eddie and Ben Shahrabani served as editors and gave vital input that made the story 1000-times better. So yeah, I owe Com.x A LOT for their help with making Duppy ’78 a reality.

Putting children at the forefront of a story can be challenging. How did you created these Duppy Conquerors?

I took a bit of inspiration from Akira on this aspect — the three Duppy Conquerors are inspired by The Espers. That, and in a lot of religious cultures, children are seen as spiritual leaders, so it made sense to me for the story. I also wanted them to be kids because, in this story, they are the most powerful characters, but they’re still kids and impressionable and/or controllable, for lack of a better way to put it. Add a few more years to them and they might be a bit more aware of their abilities, but as the story progresses, they are forced to grow up fast. 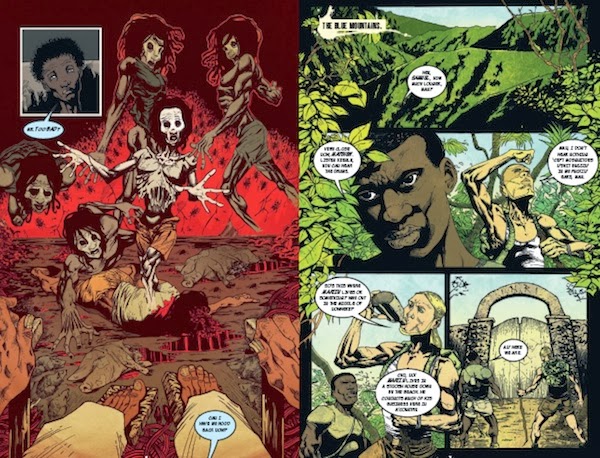 Ever lived in Jamaica or an equally spirited or haunted part of the world?

No to Jamaica, unfortunately. As far as haunted — man, I wish! I grew up in Florida, then lived in New York for a little over 10 years, and now currently reside in Minneapolis for the time being. I guess those three places are scary for a variety of reasons, but more “real world scary” and not “horror movie” scary — haha! Sadly, I’ve never experienced any supernatural elements in any of my travels. And I say “sadly” only because I’d love to have a good ghost story, if only to establish a bit of wonder about the “other side,” if that makes any sense.

What is next up for you, Casey? Where can we find you online?

Right now, nothing set in stone. I took a bit of a sabbatical from comics a few years back after devoting the first 10 or so years of my career to the comic book industry — between my time at Wizard, Vertigo, MTV and freelancing here and there for a bunch of comic media outlets, I got burned out by the business side of comics (and a lot of the not-so-pretty aspects that happen behind the scenes) and needed to take a break and be in the world of the Muggles for a bit.

But now, I’d LOVE to do some more comic writing. I have an idea for another OGN or a maxi-series that I’ve been working on for about 15 years now, and I’d love to try my hand at a monthly book — but who wouldn’t, right? I will say it’s crazy how much the industry has evolved since I’ve been away these past few years. I don’t even know where to begin in terms of pitching ideas or who’s who anymore, which I guess is a good thing in some regards, but I definitely hit a hard reset button there.

I’m online at all the usual spots — Twitter where I say weird, random stuff and complain about the New York Knicks, Tumblr where I post weird, random photos, Instagram if you want to see a bunch of pictures of my mean little dachshund, Oakley, the Duppy ’78 blog that has updates about the book and other random things from me and the other creators, and I have my own personal site with all of my work at caseyseijas.com. 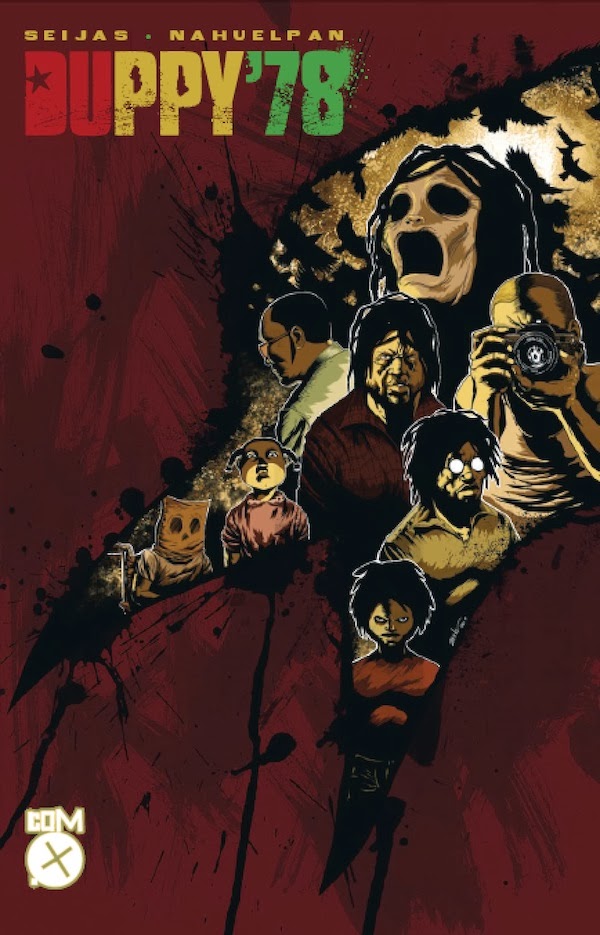 Duppy ’78 arrives in stores this February