This week at ComiXology, fans of 2000AD books will get a special treat, a full graphic novel, The Many, from cover artist Charlie Gillespie.

This future world with superpowers, vampire lore and gore ranks right up there with Transmetropolitan or Black Mask’s Ballistic. Both the art and story are rich and colorful. 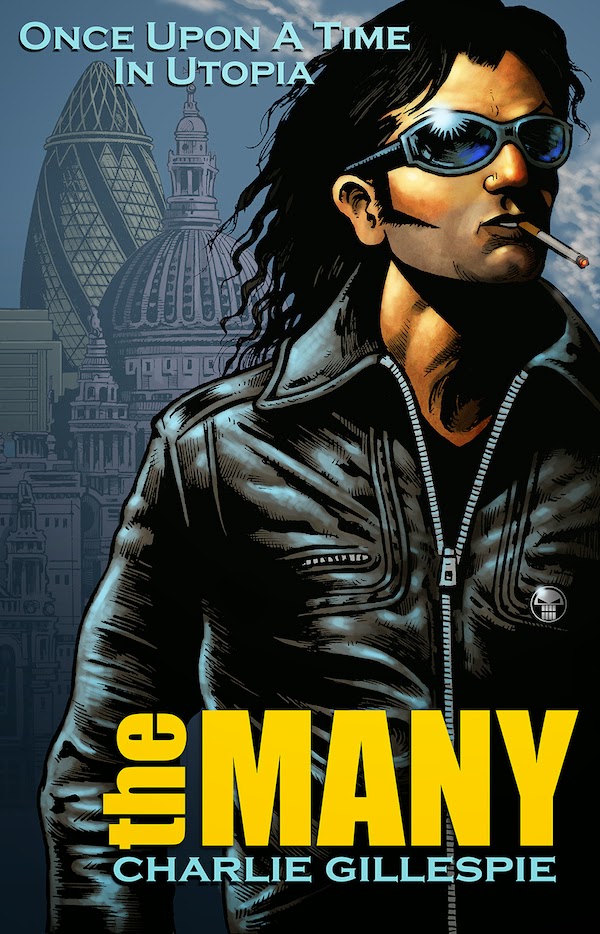 Charlie Gillespie joins us today for a run on the Cosmic Treadmill!

FOG!: Thanks for joining us today for your ComiXology Graphic Novel The Many! Fans may have seen your work with. 2000AD and Judge Dredd, but can you tell us some of the video games you have worked on as well?

Charlie Gillespie: Cheers, thanks for hosting me! Off the top of my head, Micro Maniacs, Mike Tyson Boxing, BC, Paperwings, Burn Zombie Burn, Legends of the Guardians, Lara Croft Guardians of the Light (iPhone/iPad), Call Of Duty Black Ops Zombies (iPhone/iPad), Wipeout (from the TV show), and there was work on a few others along the way. 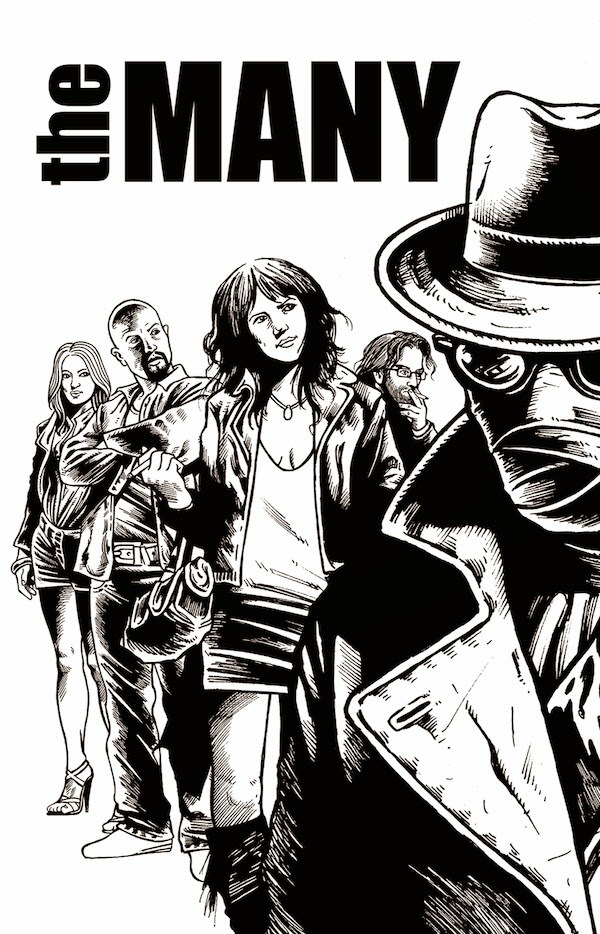 What are some other comics work you have done? Is this your first venture with both writing and drawing a comic?

Yeah this is my first big adventure into writing and drawing a comic book, I’ve dabbled with doing both before but nothing that was this complex and hopefully interesting. The other stuff I’ve worked on have been The Judge Dredd Megazine, 2000AD, Shit the Dog, Wasted, Sancho, covers and illustrations for various sci-fi/fantasy mags and Magic Cards and that sort of thing.

What is your elevator pitch for this genre spanning book, The Many?

The Many is an extremely dark and gritty adult Harry Potter Vs The Lost Boys in the Pentagon Shot through the Prism of Noam Chomsky and Christopher Hitchens to the sound of Primal Scream’s Accelerator. With added Goat!

I was sensing influences as diverse as Gonzo journalism, vampires, Lock Stock & Two Smoking Barrels, and V for Vendetta. Were any of these accurate? Feel free to tell me if I am off course! What other influences color the story? It pretty much has it all! 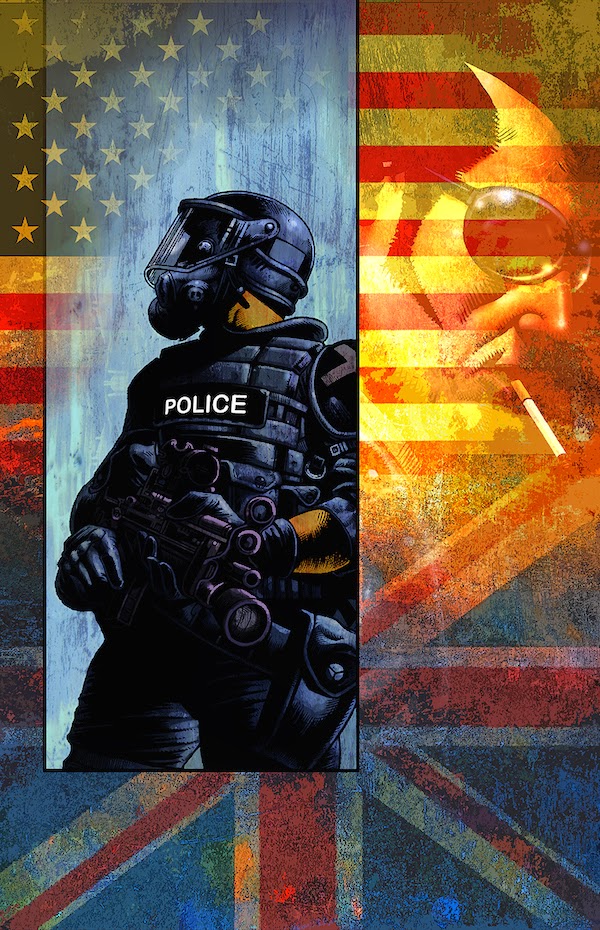 I’d say you are pretty on the ball, it’s been influenced by a lot of diverse things, some probably not completely consciously and others knowingly.

The politics of it is a response to what’s been going on in the world these last twenty years. The fantasy and horror elements are influenced from the culture and literature I absorb, from J.G.Ballard to Franz Kafka, from John Gray to Alfred Bester and a big dose of everything 2000AD cause that’s what I grew up on.

How long has The Many been in development?

Well, it’s been bubbling along for a few years in the background of my life, with a lot more writing going on than drawing sometimes. It gets done in-between the day jobs and all the other adult duties.

There is more to come, after this volume, correct? You have more to say in this world…would you say this is an ongoing project?

There are two further books of similar length planned for The Many. The second book is called Appetite For Destruction and the third is called The End Of History. It’s just me on it so it’ll take a little while but it’ll get there.

Your art reminds us of the great Dredd artists Bisley, Ezquerra, Robinson. What other comic artists influence you?

Well, I’ve been loving Tim Gibson’s Moth City at the moment and Sean Murphy has been doing great work since Joe the Barbarian, there is Chris Weston, Leonardo Manco and I always have time for the Mighty Glen Fabry. 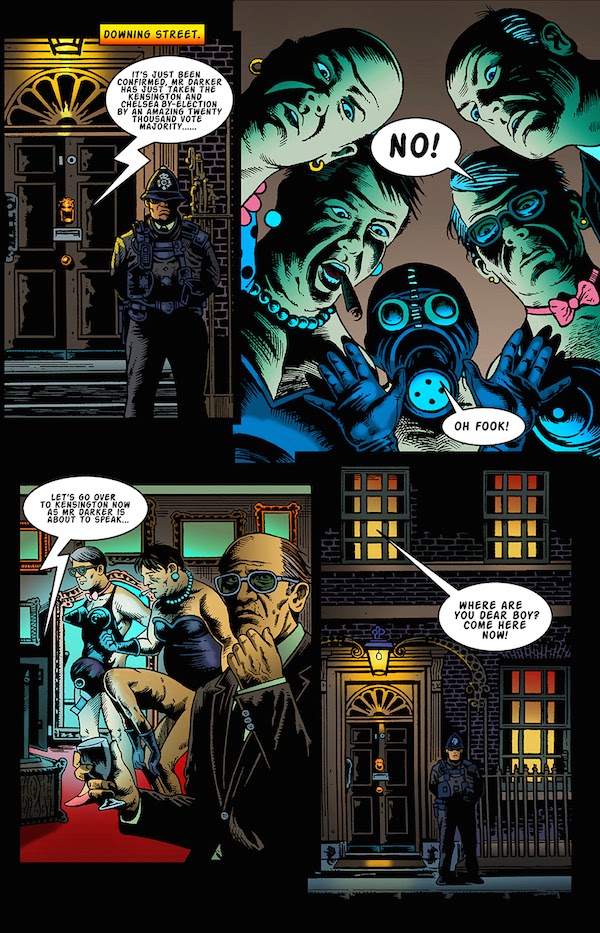 Outside of comics I’m a Lucien Freud, Andrew Wyeth and Norman Rockwell fan.

If you could party in real life with a Dark Judge, Anderson or Thomas Darker, who would you choose?

I’d have all of them please! 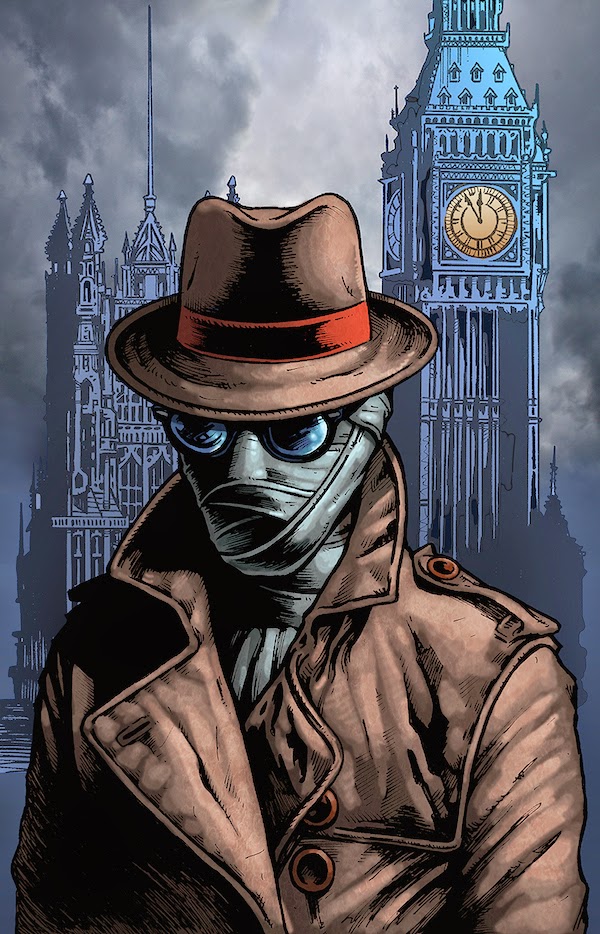 The Many Volume 1: Once Upon a Time in Utopia is available today on ComiXology
Follow Charlie on Twitter and visit his site www.charliegillespie.co.uk