For a memorable TV show, you either need a great, attention-grabbing musical introduction (like Perry Mason), a catchy theme song, like Gilligan’s Island or The Brady Bunch, or you need someone like Jack Bauer telling you what to expect in the next hour.

One of the things I love about 24 is hearing Kiefer Sutherland’s voice at the beginning of each episode. 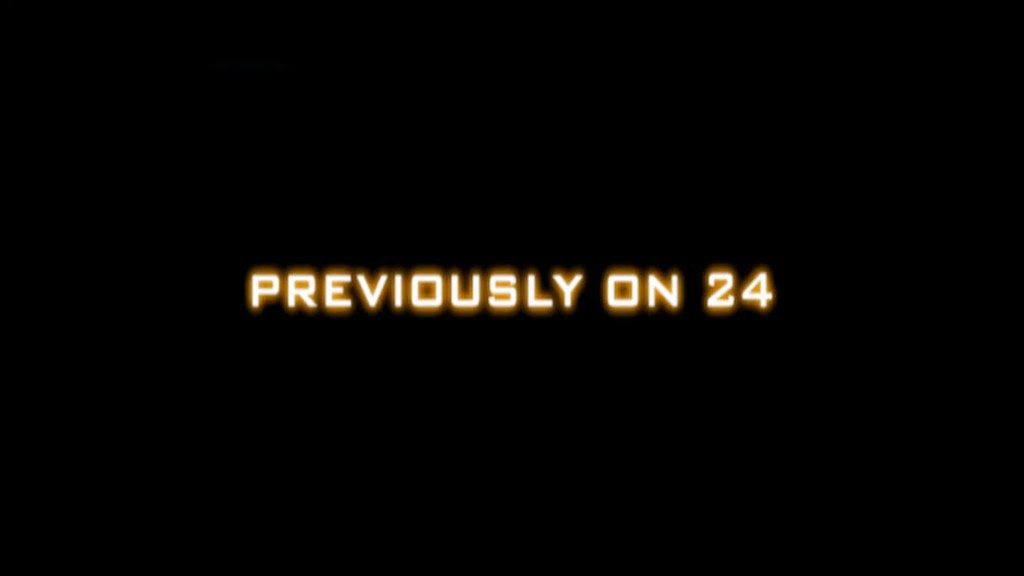 It’s brief, no-nonsense and immediately puts you into the action, as all good TV intros should. Although it’s rare today, the spoken intro used to be the standard way to open up a TV show, a throwback to radio where everything, of course, had to be announced.

The deadly serious narrations of classic shows like Dragnet, and The Naked City have been parodied many times but a few recent shows have taken the idea and made it their own.

It’s great to have Jack Bauer back in 24: Live Another Day.  I nearly forgot how much of a thrill I get when I hear “the following takes place between 9:00 a.m. and 10 a.m.” Sutherland’s smooth rasp (if there can be such a thing) is authoritative, weary and reassuring at the same time. Two of those qualities – not so much the weariness – are also the reason he’s the voice of Bank of America ads.

And a little more of Kiefer (AKA “Velvet” as TWOP used to refer to him),  promoting the 24 A&E marathon promo:

“In the Criminal Justice System, the people are represented by two separate, yet equally important, groups. The police who investigate crime and the District Attorneys who prosecute the offenders. These are their stories.” The famous Dragnet– inspired opening narration (followed by the classic L&O “dunk dunk” gavel sound effect) was provided by Steven Zirnkilton  and rewritten for each spin-off.

The iconic, almost emotionless reading of “previously on Lost,” wasn’t delivered by an actor but by Lloyd Braun, the by former ABC chairman who gave the series a greenlight before leaving the network.

Not only is the perp of the week introduced via narration, but the announcer loudly proclaims, “The Naked City… brought to you by Kentucky Kings cigarettes.” Lawrence Dobkin, who was also the voice of the Hall of Presidents at Disney World, was the one to tell us, “There are eight million stories in the Naked City. This has been one of them.”

Of course, the most famous series intro – narrated or not — might be The Twlight Zone, has introduced by series creator Rod Serling. “You’re traveling through another dimension…. at the signpost up ahead, your next stop: The Twilight Zone.” He also would set up each episode, often appearing as a guide who is unseen to the unfortunate souls who are about to have their world turned upside-down.

The weekly set-up introducing us to wrongfully convicted Dr. Kimble for whom “fate moves its huge hand,” setting him free for his own pursuit of justice, was done by actor William Conrad, who’d go on to star in his own Quinn-Martin production, Cannon.

The other claimant for most-famous TV intro: “Space: the final frontier!” as spoken by James T. Kirk himself, William Shatner. When Star Trek:The Next Generation debuted, the now-dated closing line “to boldly go where no man has gone before,” was of course, changed to “to boldly go where no one has gone before.” It’s a more P.C., version, but it lacks a certain excitement about the thrill of discovery on behalf of the whole human race. Admit it, you still prefer the Shatner-voiced intro to the more restrained Patrick Stewart one.

Conrad was the announcer for several TV series including The Fugitive and the radio version of Gunsmoke, but didn’t do the narration when he got his own TV show in 1971. As the breathless announcer tells us in this clip: “Cannon! Starring William Conrad… Tonight’s episode: “Stakeout!”

Since this series, which starred Buddy Ebsen, was a Cannon spin-off, it had the same “A Quinn Martin production” spoken credits sequence, such as the one that introduces “Tonight’s episode: Nest of Scorpions!”

Another intro we all know too well, especially after two big-screen movie versions, starring and produced by Drew Barrymore. Gone is the dead-serious approach to fighting crime, swapped for a little jiggle and a lot of hairspray. The story of “three little girls” who grow up to be detectives who all work for a man named Charlie is thanks to Charlie himself, the late John Forsythe, who also starred on “Dynasty.”

A perfect example of why self-important narration just doesn’t work today: Zak Bagans’ dead-serious reveal of his life-long ghost-hunting mission just comes off as laughable. His ominous intimations that he’s being followed by a ghost are meant to keep you hooked but if these one-off adventures don’t do it for you, that tidbit won’t have you tuning in again. The show itself is almost all night-vision footage and the adventurers playing back EVPs and interpreting odd noises as meaningful language. Don’t get me wrong, I love a good ghost hunting show, this just isn’t it.

In this article:Behind-The-Scenes, History, Television