I may not have been able to see X-Men: Days of Future Past, but that didn’t mean my Memorial Day Weekend was mutant-less.

After more than 20 years, I decided to revisit the Uncanny X-Men issue that really got me going waaay back in 1993. 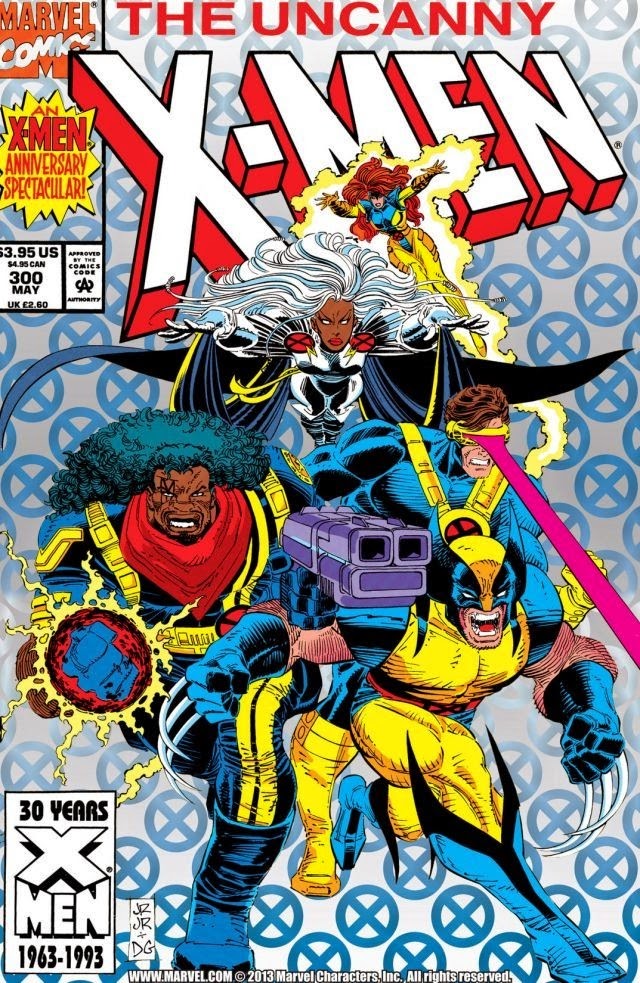 To be clear, Uncanny X-Men #300 really tickled my 14-year-old brain’s sweet spot. I mean, that cover alone. All chrome with holographic X logos all over the place while my favorite characters pose all awesomely with absolutely no context as to the story inside?

If that’s not going to pull in a teenager firmly entrenched in 90s comic culture, then what can, I ask? What can?!

It wasn’t just the cover that pulled me in, though. No sir, as amazing as I found that image, it was the story beyond that really hooked me. Like, a lot.

So with all the X-Men hype this weekend, I couldn’t help but wonder if, 21 years later, if this once beloved X-Men comic would still do it for me. So I reached into the ol’ long box, fished out Uncanny X-Men #300 and sat down for what I hoped would be revisiting a dear, old friend…

That friend, it turns out, did not age well.

Here’s some context about 14-year-old me.

At the time I hadn’t really read that much X-Men.

Every once in a while I would dabble, but I was too young for the Claremont/Byrne stuff and I hadn’t even been born for the Claremont/Cockrum stuff. I’d buy X-Men from time-to-time but I was never hooked. Then the Fox cartoon hit and, like everyone else in America, I was an X-Men kid. So I was primed to be a fan by the time I picked up Uncanny X-Men #300.

I guess what I’m getting at is I know what a good X-Men story feels like now and #300 is just… okay.

The story behind issue #300 is pretty generic.

Magneto’s Acolytes are causing trouble somewhere in France and the X-Men are on hand to give them trouble in turn. There ya go. That’s it. Nothing revolutionary storytelling wise here.

Oh, it tries to be something big.

Writer Scott Lobdell teases multiple times that this is going to be a story that deals with the history of the X-Men, in particular the history between Xavier and Magneto. 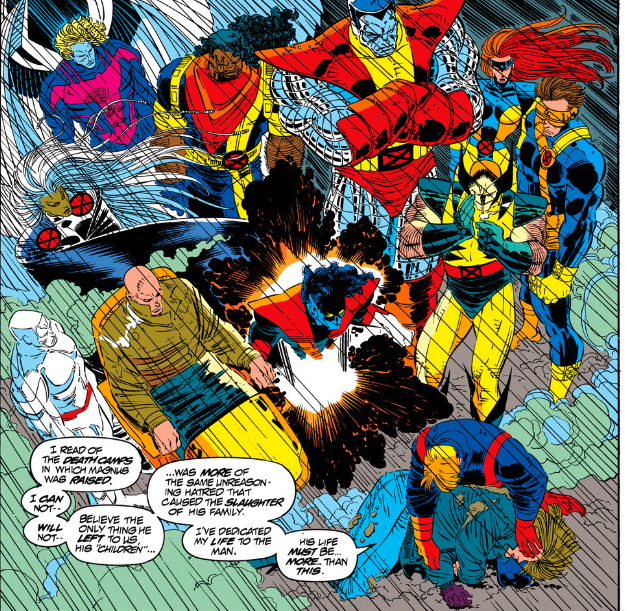 Yet every time the dichotomy between Xavier and Magneto is touched on, any time the history that this team had endured is referenced, we instead are forced to see kewl characters, posing in kewl poses and saying kewl things.

It was all rendered by John Romita, Jr., sure, but still, that only goes so far.

Again, in 1993, I had no idea that I was being cheated by the narrative. I had, after all, come to see kewl characters, posing in kewl poses and saying kewl things. 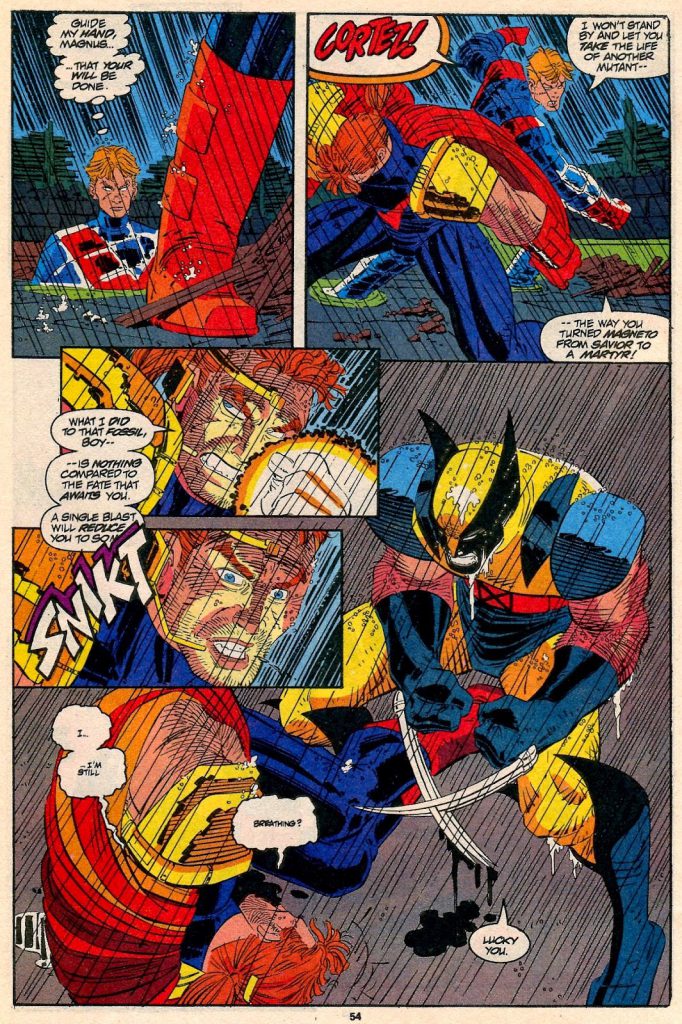 So here I am, 20 years between readings, and, yeah, feeling pretty bummed. I wanted to feel 14 again. I wanted that sense of “HOLY SHIT!” I had the first time I read this comic and, God’s honest truth, I spent a good half hour wondering why I didn’t get any of that.

It’s because, unlike the Claremont/Byrne/Cockrum/Adams/Thomas/Morrison stuff, there’s really no substance to be had here beyond just looking cool.

With X-Men: Days of Future Past tearing up the box office, I’m reminded there’s a reason Marvel’s movie makers (for the most part) seem drawn to certain runs and eras for inspiration. Past or present, it’s the runs that had heart, the runs that had substance, the runs that, despite the slang and dress being dated, still tell honest, compelling stories with characters who feel real.

In retrospect, was Uncanny X-Men #300 terrible? 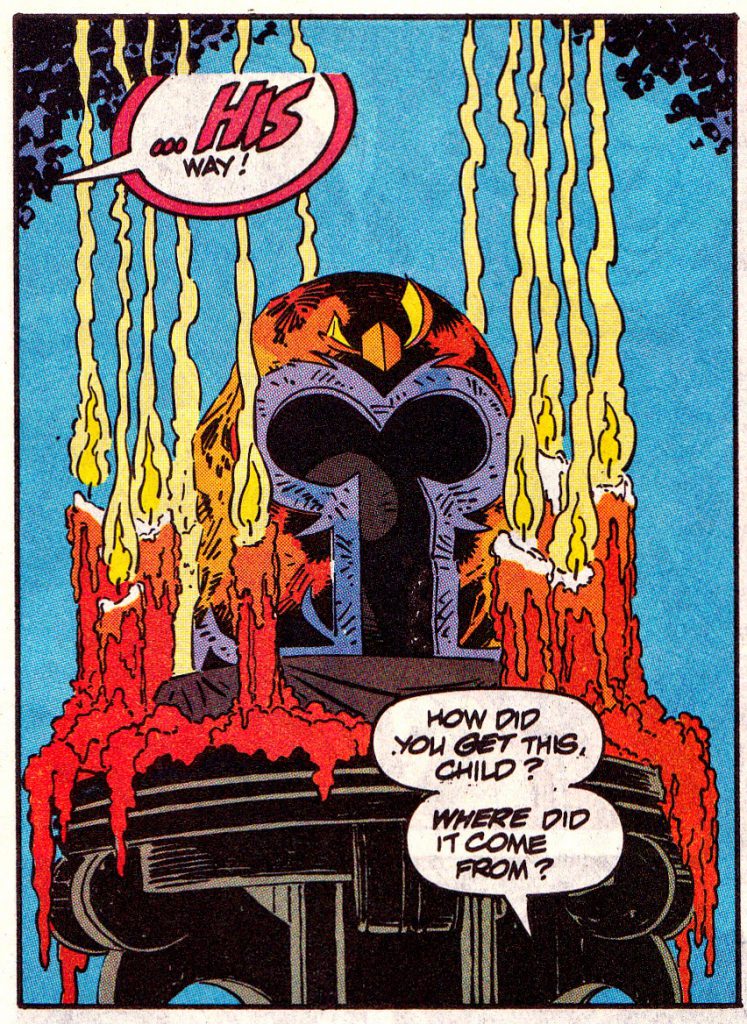 No, not at all. If you let it exist as it is, as a product of it’s time and place, then it’s fun enough to kill the 20 or so minutes it takes to read.

But it won’t stay with you.

In this article:Comic Books/Strips, Growing Up, Nostalgia, Written by Chris Brennaman, X-Men