What were the most influential horror films of the 70s?

HALLOWEEN, THE OMEN, and CARRIE come quickly to mind, as does ALIEN if you count sci-fi horror.

HALLOWEEN inspired a “slasher” subgenre that ran into the 80s and continues today.

But in the decade of the 70s, no horror film had as many direct imitators as THE EXORCIST.

Here’s a run-down of the imitators.

I’m skipping “nunsploitation” films like ALUCARDA (1975, with EXORCIST elements) and reincarnation films like AUDREY ROSE (1977).  But I’ll include some later European imitators where horror segued into exploitation.

The main criteria for inclusion on the list is a young female character corrupted, in some way, by an intruding evil supernatural force.  Most of these imitators are pretty bad – but some are fun to laugh at.

I’ve written more about these films in my Claws & Saucers guidebook, but I hope you’ll enjoy the descriptions, comparisons, and links below.

MAGDALENA, POSSESSED BY THE DEVIL (1974) 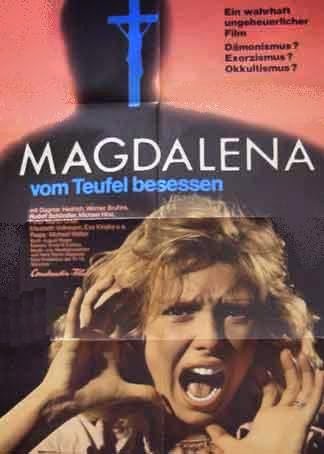 Italy is usually the first European country to pump out an imitation of an American hit.  This time it was West Germany with “Magdalena, vom Teufel besessen.”  Did they film their imitation as an intellectual theological drama?  Of course not!  They made an exploitation film.

Horror elements are minimal, so the main point is watching the anti-heroine foaming at the mouth, insulting authority figures, smashing cups and plates, and seducing witless males… and all of this while scantily clad or buck naked.  Sleazy and ridiculous, but surprisingly entertaining. 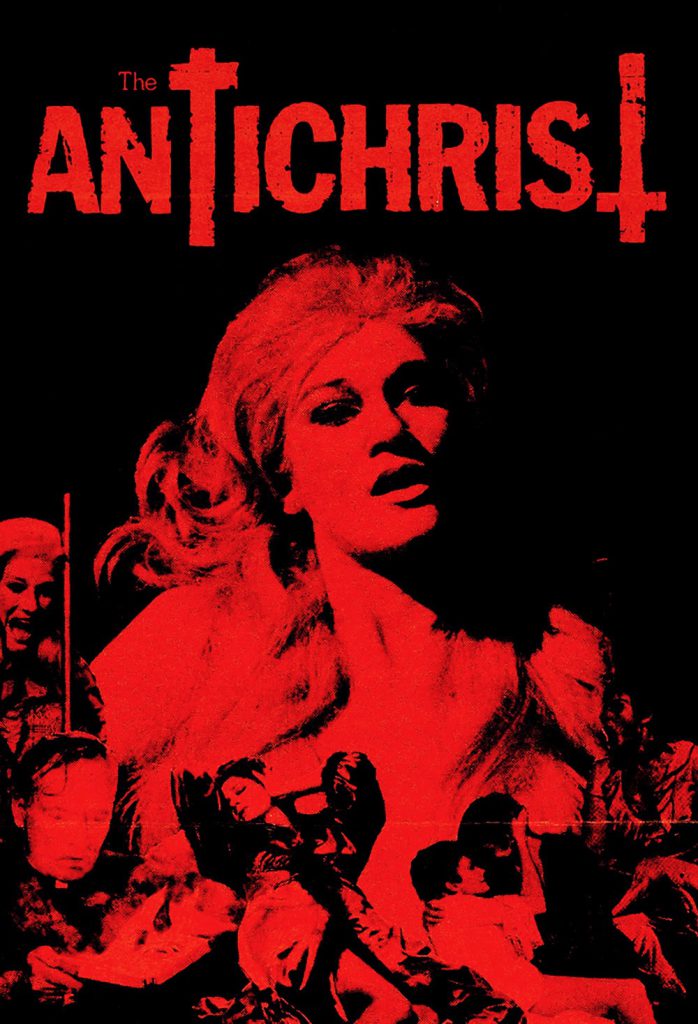 Here’s the first of the Italian imitators.  If you don’t mind a lot of barf (mostly scrambled eggs), you can enjoy our wheelchair-bound heroine fantasizing about Satanic masses and cursing out her family members in church. 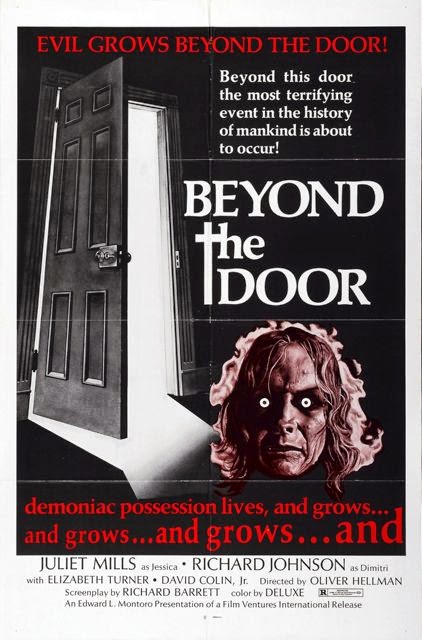 Here’s another Italian imitator.  It’s the first to merge EXORCIST elements with ROSEMARY’S BABY.  It’s set in San Francisco, looks good, and can almost be taken seriously until it overdoses on green vomit in the second half.

Like THE ANTICHRIST, it tries to be a real horror movie.  Just before the halfway point, a kid’s room takes on a life of its own, like in POLTERGEIST a few years later.  It has other highlights too, but the unlikeable characters make it one of the lesser imitators. 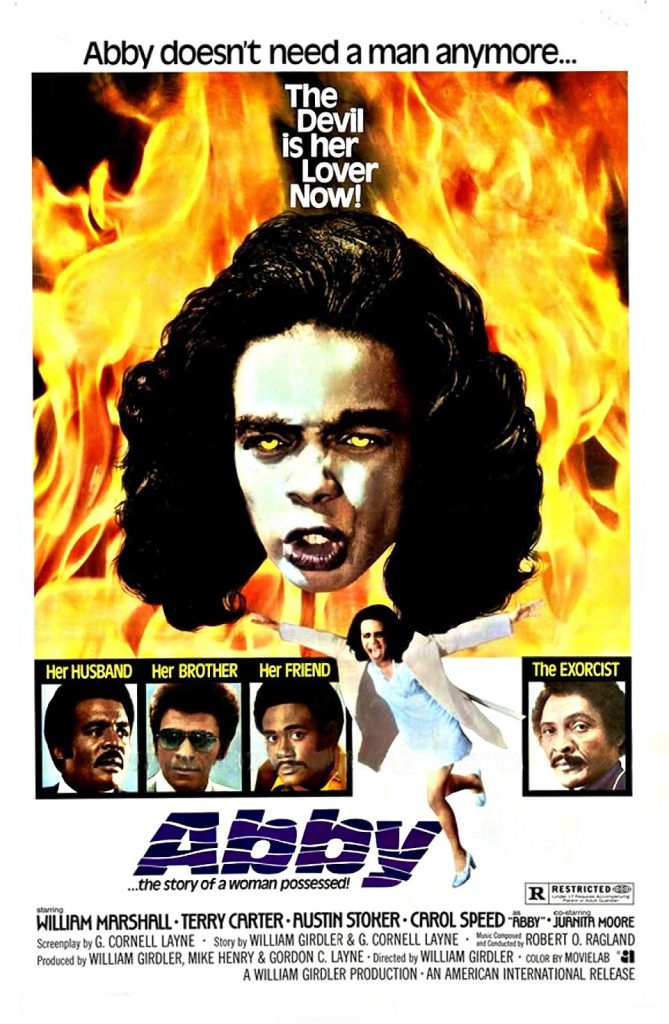 Here’s an idea: imitate THE EXORCIST but with an all-black cast!  It even includes William Marshall from BLACULA.  Marshall plays a priest who accidentally unleashes a demon that possesses his daughter-in-law.

It’s scary to hear the girl talk in a demon voice, but, unfortunately, most of the picture feels small-time and meandering.  At least Marshall is good, and some black bars make for nice locations.  Worth the watch for fans.

Also known as “The Sexorcist” or “The Eerie Midnight Horror Show,” this odd Italian imitator seems to be a hasty revision of an earlier script.  The first (and best) parts depict a twisted life-sized crucified Jesus statue coming to life and ravishing an unsuspecting art student.  Then the student gets possessed, and EXORCIST mode kicks in.

As in THE ANTICHRIST, a Black Mass is a highlight, though it’s just a fantasy.  Overall it’s very weak, possibly the worst imitator out there, but weird enough to be worth a look. 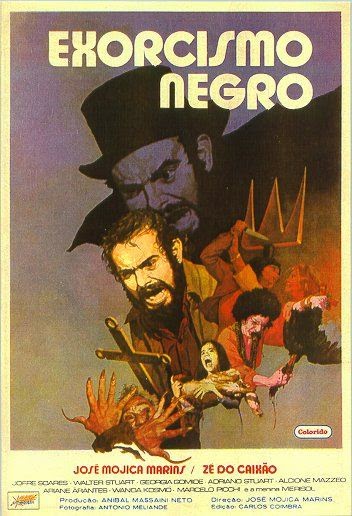 With this one, Spain became the third European country to produce an EXORCIST copy in 1974.  Though cheap and poor, the film is notable for featuring the great Paul Naschy as the heroic priest.  Some of the demon make up is hideous, but at least the vomit isn’t overdone.  Another nice touch: the evil spirit briefly possesses a dog! 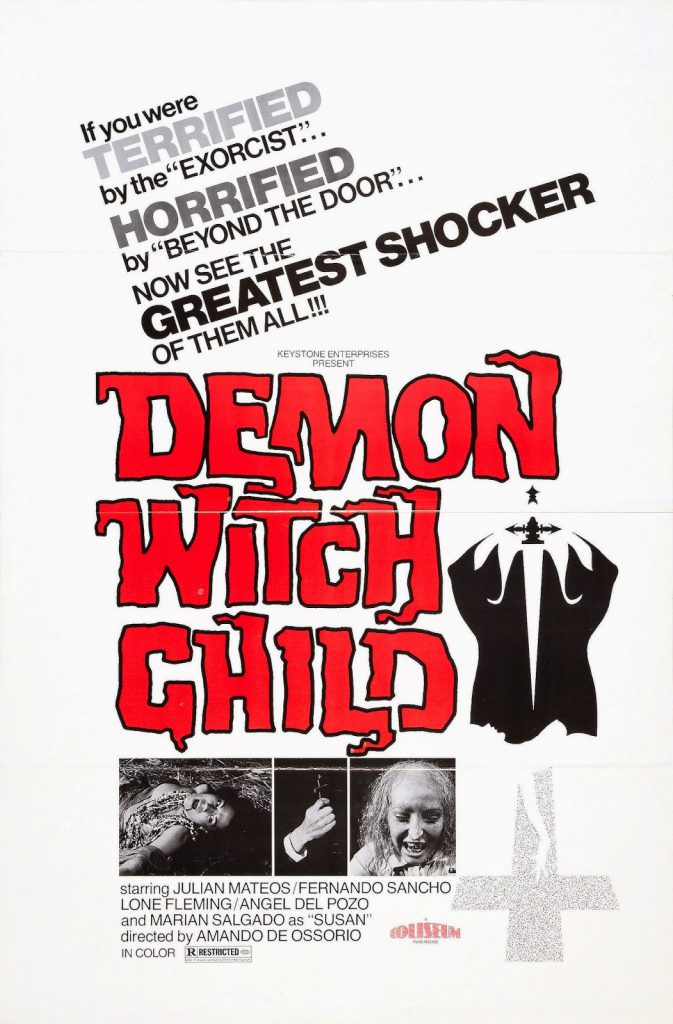 Amando de Ossorio – the BLIND DEAD director – gives this Spanish imitator a downbeat, even bitter, atmosphere.  As in ENTER THE DEVIL and THE ANTICHRIST, a Black Mass scene is the highlight – and here it’s for real, as some evil gypsies hypnotize the police commissioner’s daughter into attacking everyone around her.

One interesting note: the girl is hostile to sexuality instead of becoming oversexed as usual.  Another note: the actress dubbed Linda Blair for the Spanish EXORCIST print.  It’s a bad movie, but marginally better than the Paul Naschy one. 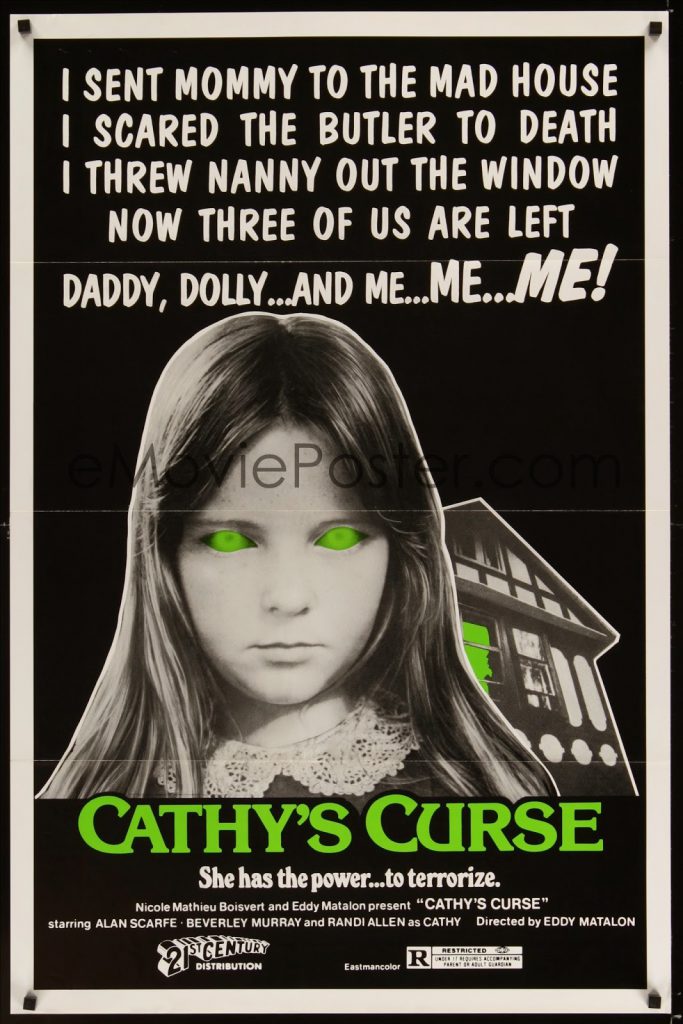 This French-Canadian imitator sees the girl possessed not by the Devil but by the spirit of her deceased evil aunt.  Special effects and consequences are minimal.  But something happens every five minutes, so at least the thing isn’t boring.  The low body count includes one dog.

As in DEMON WITCH CHILD, the girl has an evil doll, like a voodoo doll.  Unlike most imitators, this one has very little sleaze. 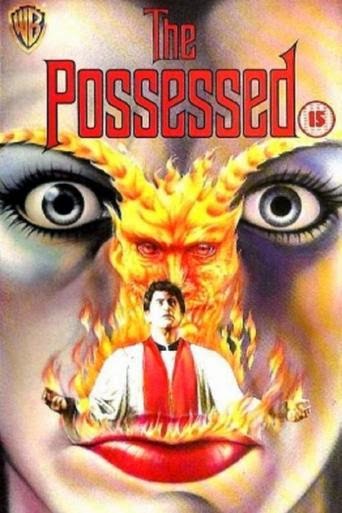 Here’s the least sleazy imitator of all.  Why?  It’s made for TV!  Its claim to fame is featuring Harrison Ford just three weeks before STAR WARS appeared in theaters.  Ford plays a professor having an affair with one of the students at a rural girls’ school… where someone gets possessed by an evil spirit.  The possessed lady gains the power to create fires at will.  A bigger budget would have helped, but all things considered it’s one of the best imitators. 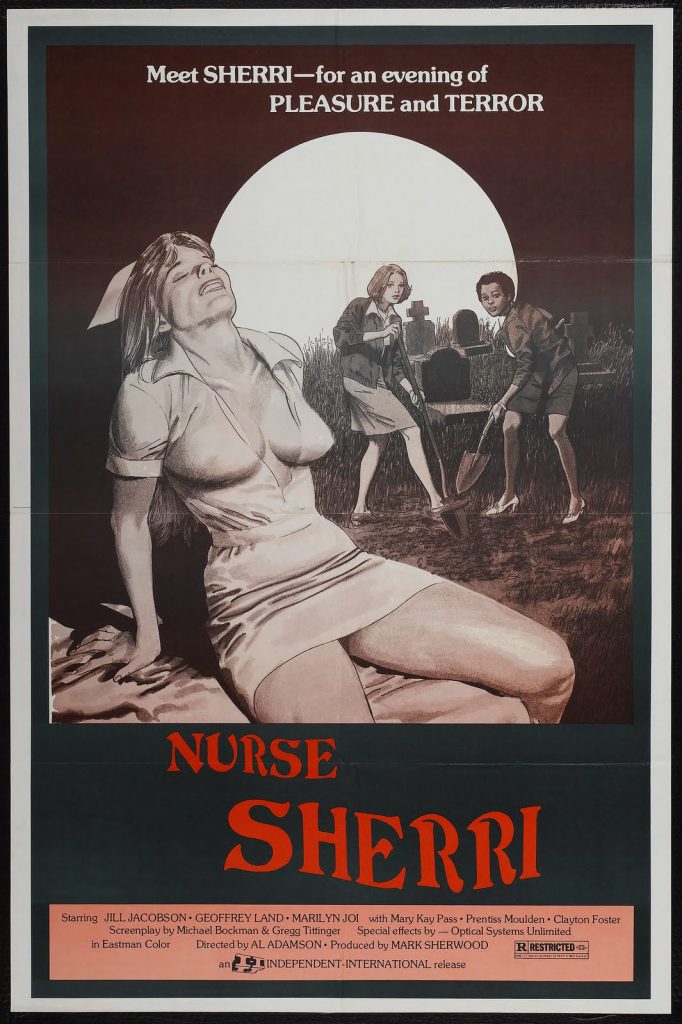 Also known as “Hospital of Terror,” this hilarious exploitation film centers around a hospital where every (female) nurse is having an affair with a doctor or a patient.  Big-breasted Sherri and a few minor characters are possessed on and off by some obscure evil spirit that looks like green marks scratched onto the film stock.  Cheap, silly, but highly entertaining for Bad Movie fans.

Speaking of highly entertaining, this Italian imitator wins the prize of sleaziest EXORCIST imitator of them all.  It’s actually closer to sexploitation than horror, as we alternate between the possessed teenager, seducing half the men around her, and a buxom blonde vixen seducing the other half.

Instead of an exorcist, the girl’s father has to save her.  One version even includes brief hardcore sex inserts, but the regular softcore version is sleazy enough.  The clip is NSFW.

By the 80s, the influence of THE EXORCIST was notable but nebulous, so there are no straight imitators as in the 70s.

You can still find prominent EXORCIST elements in films like HELL NIGHT (1981), MANHATTAN BABY (1982), AMITYVILLE II: THE POSSESSION (1982), and more.