This edition of Kickstarter Korner kicks the Can with Dan Hosek and also, apparently Keith Koppenhoefer, who jumped in so as not to be silenced any more!

File 13 is a fun retro superhero comic looking for that last boost to make a childhood dream a reality. 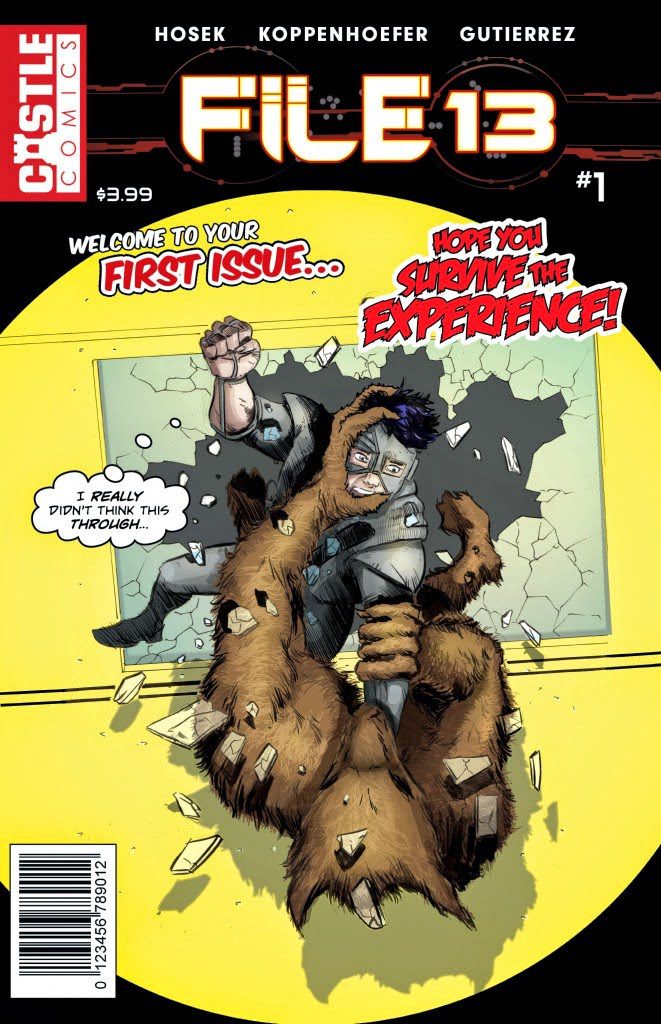 Consider your pledges after the jump!

FOG!: Dan, thanks for taking the time to tell us about File 13! What’s the general scoop?

Dan Hosek: Thanks for having me, Clay. File 13 is a full-color, monthly series about Scott Solson’s high tech, high adventure “hero’s journey” (with a healthy dose of absurdist humor thrown in). The stories draw on equal parts classic superhero storytelling, pop culture references, high drama, science fiction, and historic events that are stranger than fiction.

At its best, it will drop your jaw then make you laugh three pages later. Its also the culmination of a 30 year journey for me and this character.  I created the basis for the book—well, the book now hardly resembles anything like what I created when I was 12, but the basic characters are there.

Keith Koppenhoefer: Oh, hey, what’s up?  You doing an interview or something… without me?

Dan: What? Oh no. No.  That’s awesome that you’re here. This is Keith, he’s my collaborator and co-creator of what’s become File 13.

File 13 has its origins way back to your childhood! Tell us about Can Man!

Dan: The character “Can Man” was created when I was about 12, about the same time I met Keith, actually. And I wasn’t like Erik Larsen or anything where he created thousands of pages of Dragon comics when he was a kid.  But I did make four or five crudely drawn books, and it was a funny idea for a character.

Keith: Very crudely. I have the issues to prove it. The entire character was based around a garbage can. As we got older, we tried to keep that absurd core, but somehow make it fit why he would use a garbage can as the foundation of this armor. 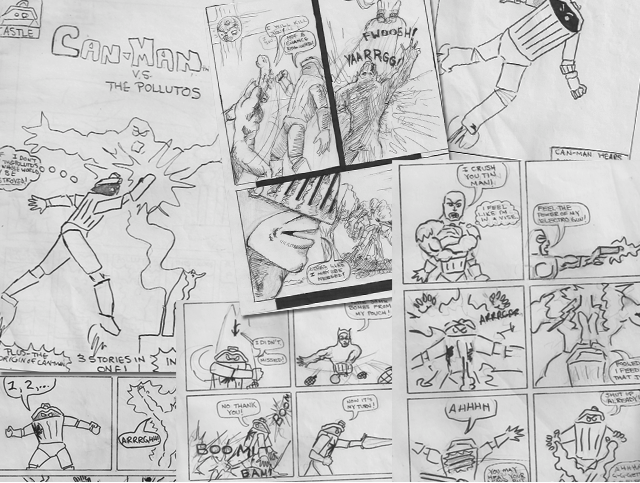 Dan: I think we actually created a plausible reason why the body of the armor IS a garbage can. Much better than the childhood origin of “scientist works on a formula; scientist throws formula in garbage can; garbage can explodes and regenerates itself; scientist becomes a super hero.” Not much happened with the character until about 7 years ago or so, when Keith and I started texting about the character.  We would text at our desk jobs when we had downtime, and for some reason the character came up in conversation, and tons of new ideas about him and a new world for him just flowed.

Keith: The Internet really revolutionized how to waste time at work and we took full advantage of it, brainstorming daily. The basic ideas took on a life of their own and became this generation-spanning story with the Solson family at the center of it.

Dan: Yeah—for once it wasn’t a complete waste of time.  We came up with over 40 ridiculous characters spanning almost 100 years of history and 25 or more issues of stories and ideas from that.

Would you describe this book as having a bit of a retro feel?

Dan: Definitely, but retro in the best possible way.  I grew up reading comics in the 1980s and loved everything about them from the single issue stories, to crisp, more simple coloring. Maybe the art at times wasn’t as “lush” for lack of a better term, but it had more action; it was more dynamic, in my opinion. 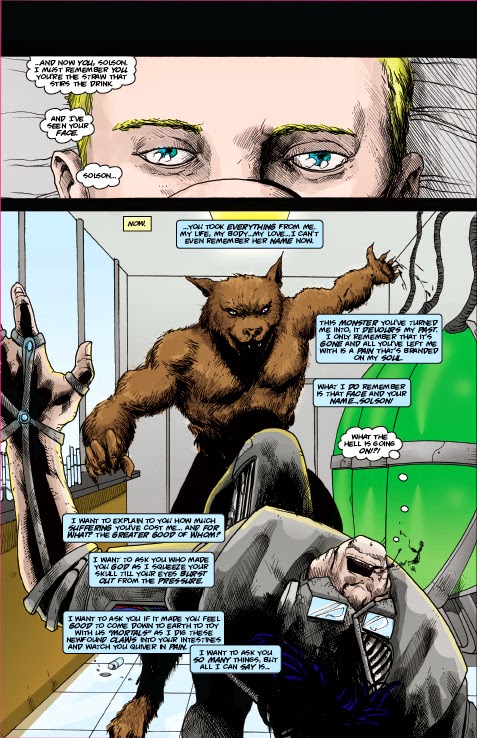 What appeals to you about 80s comics?

Keith: Everything. The cohesiveness, the continuity. The fact that anything was possible and consequences were real.  Characters didn’t feel like merchandising properties. We grew up on those books. I was huge Marvel Zombie. I loved how you’d get that editor’s note telling you to read The Fantastic Four to find out what the commotion was uptown in a Spidey book.

Dan: It was a shared universe—at both of the big two, really—and it felt like everyone was playing in the same sandbox.  That’s a feel I’d love to have in this book, and any other books if we’re lucky enough to have the line grow.

How many issues are you planning for? Is this a limited series?

Dan: As many as we can do.  Like I said, we already have solid plans for the first two years, and rough plans probably for another two or three after that.

Keith: We have the overall mythology building to a big climax in issue 25.

Dan: I loved the idea in older books that ANY issue should be a jumping on point, so I think we’ll do our best to have smaller story arcs that any new reader can jump into, but always have it building up that bigger mythology.

Keith: Definitely. It’s equally important to build your story while still welcoming in as many new readers as possible. Basically, if we’re fortunate enough to keep going, we will.

Tell us a bit about the collaborators on your book.

Dan: About a year ago when Keith and I got serious about making this happen, we were lucky enough to find Ryan Gutierrez.  I put up a request for an artist on a freelancer website and got like 130 responses.  We sifted through all the applicants, and I loved Ryan’s work the minute I saw it.

Keith: Early on Dan showed me the candidates without giving me too much on his opinion.  We both agreed he was the guy, and we were thrilled when he agreed to work with us.

Dan: Ryan really has become a partner in this. He’s a great guy. It’s a bonus that his work is amazing and he could work within our budget. When I worked at Marvel, I heard stories in the bullpen that John Romita would caution artists about redoing their work too much cause it would lose its “spark.”

Ryan’s stuff has that “spark,” and I don’t think it’s something you can teach someone.  You either have it or you don’t. His work has the dynamism I love about all the great artists, and overall he keeps getting better and better.

We’ve also brought on Paul Tutrone as letterer. Paul headed Marvel’s lettering department (when they had one), and we shared an office when we both started at Marvel as assistant editors. On top of being a top-notch letterer, he’s also a close friend.

You’ve worked in comics before. Tell us about what you did at Marvel and what the Harvey Nomination was for.

Dan: Honestly, I wish it was more awesome than it is.  I was an assistant editor at Marvel in the ‘90s.  And, one of the “great” things an assistant editor gets to do is trade paperback reprints. This basically involves hiring a graphic designer to do a layout for the book and back then, labeling lots and lots of film (usually on weekends).  I’m sure it’s all digital now, so these assistants today don’t know the joy of trying to decipher which color plate matches with what… Anyway, long story short, I was nominated for doing that: best reprint editor.

Keith: He had to reference MY Wolverine collection for one of those.  So I’m kinda nominated too… Plus, I have been inside the Marvel offices.  Multiple times. 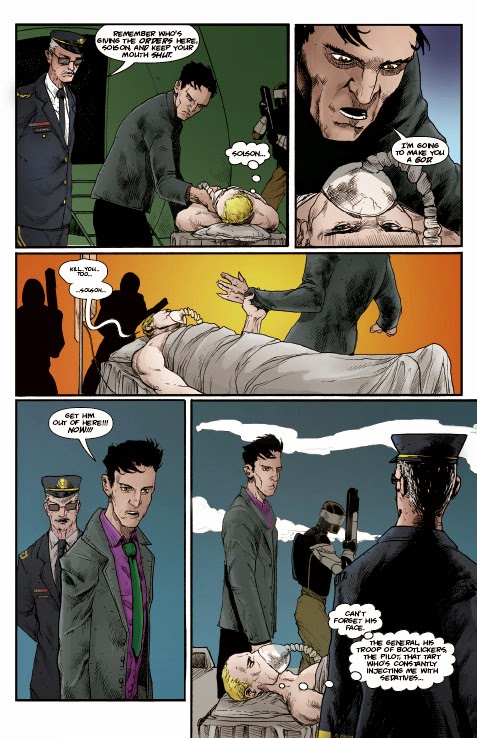 Is this your first Kickstarter Project?

Keith: Yes, and thanks to Dan, it got launched. He really did all the leg work on the Kickstarter.

Dan: Yeah, I looked into the site a while back, and I backed a couple projects. I saw some approaches I really liked on some projects and figured we should try it too.

Keith: It’s the first time we tried anything like this and it’s been an amazing experience. It’s really helped make this book a reality, but we’re still working toward our pledge goal.

Do you appreciate Kickstarter and Indiegogo as a platform, often providing a real alternative to the larger comic book industry and it’s inherent redefinition of self-publishing?

Dan: Seriously, we think Kickstarter is amazing. It’s one of the ways the Internet is revolutionizing things like publishing, music, and art in general.  It puts power in the hands of the people to decide directly what THEY think is worth being made.

Keith: It’s hard to imagine getting the word out there and getting the funding we need to get our foot in the door without it. I don’t think this book would be going to print this fall without Kickstarter.

Dan: I’ve worked in comic book and children’s book publishing, and generally an unsolicited submission is rarely looked at.  File 13 was submitted to a comic publisher, and we didn’t hear anything. But now with Kickstarter, people don’t have to rely on the subjective opinion of one person deciding if their vision can become reality. Thanks to Kickstarter, I have no doubt File 13 will be made.

Online, you can find us at www.whatisfile13.com. You can like us at www.facebook.com/whatisfile13 for updates, previews, and contests. Please spread the word about our Kickstarter and if you have some extra cash and want some cool exclusives, consider backing it.