Andrew, who is extremely busy with his latest release, his brand new baby, took some time to discuss the book with us, his love of the characters and revealed his favorite Turtle.

Chris Prince, a very talented editor at Insight Editions, was familiar with my previous book, The Looney Tunes Treasury, and I was one of a number of writers he contacted two-and-a-half years ago, letting us know that they’d landed the license to publish a complete history of TMNT. I jumped at the opportunity and wrote up my complete pitch immediately, and I started work in the spring of 2012.

Were you a TMNT fan prior? What was your introduction to the characters?

Absolutely. Like millions of other kids, my introduction to the Turtles came in December 1987, when the original mini-series first aired on television. My younger brother, Chris, and I went nuts when we saw the first commercials, and we became diehard fans as soon as we heard the theme song during that first episode.

The following spring, we visited Jamie’s Flea Market in Amherst, Ohio (we grew up in nearby Wellington, Ohio), and I spent most of my birthday money and savings on back issues of the original Mirage comic book series.

The TMNT are likely the most successful independent comic book creation of all time, what do you think sets them apart?

I love the art in those early issues, and the characters and the premise are great, but I think the book’s title is what really put it over the top. 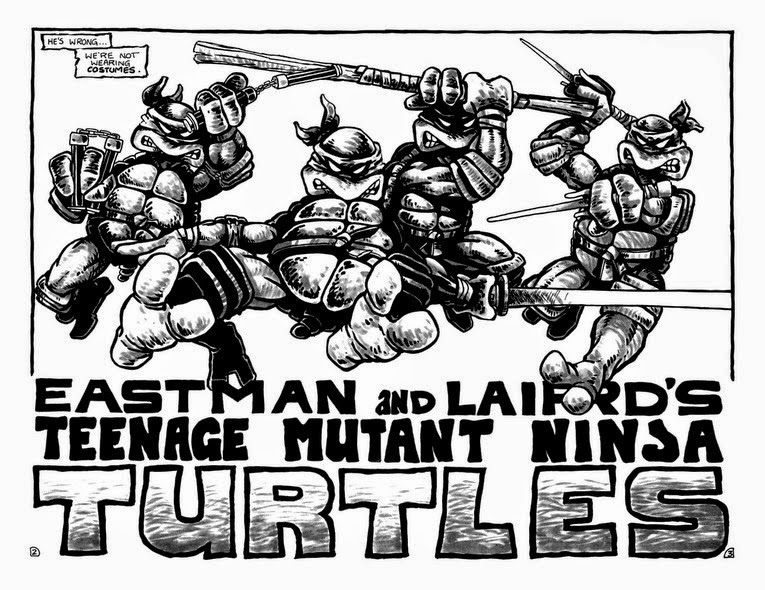 If you’d had the exact same book and called it “The Fighting Terrapins” or “Turtle Squad,” it might have been quietly forgotten after a single issue. The name “Teenage Mutant Ninja Turtles” helped Kevin Eastman and Peter Laird get national coverage from the Associated Press before the first issue had even been printed, and things just kept getting bigger from there.

What’s fascinating about the characters is that like most iconic comic books, they can easily be interpreted in a number of different incarnations, yet stay entirely true to the concept. After creators Eastman and Laird, do you have a favorite version of the Turtles?

Eastman and Laird are way, way up there, especially those first eleven issues and the early one-shots focusing on each of the individual Turtles (and the classic Return to New York storyline). All of those have been reprinted in great oversized hardcovers by IDW Publishing in recent years, and fans should definitely seek those out.

After that, I’ve got a lot of favorites. In chronological order, those first years of the 1980s animated series were a lot of fun, and I’ve still got my original 1988 action figures from Playmates Toys hanging out in my living room. I was also a huge fan of the first live action movie from 1990, which was a very faithful adaptation of the early Eastman and Laird comics.

The second live action movie, The Secret of the Ooze, was a lot of fun, too.

The most important thing about that movie is that it was the first official date for my brother and the woman who eventually became his wife. Their son is five years old and is a huge TMNT fan, and is very impressed that his uncle wrote a whole book about them.

The current TMNT comics by IDW are great, too, thanks to writers Tom Waltz, Bobby Curnow and Kevin Eastman, along with artists like Dan Duncan, Mateus Santolouco, Andy Kuhn and Ross Campbell. I’ve really been enjoying those.

And the new TMNT series on Nickelodeon is phenomenal. Executive Producer Ciro Nieli was a Turtles fan almost from day one, having bought the first print of the first issue at a comic shop in the spring of 1984. He’s a huge fan and a huge talent, and was the perfect choice to helm the new series. The accompanying toy line from Playmates is some of their best work, too, really capturing the look of the cartoon. Really looking forward to seeing where they take the Turtles over the years, and I hope this team has a good long run on the show. 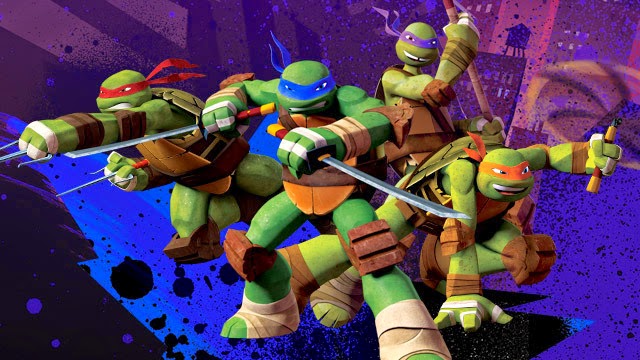 Like many of the books from Insight Editions, Teenage Mutant Ninja Turtles: The Ultimate Visual History, includes a number of inserts including a reprint of the first issue and reproduction fliers and sketches. How involved are you with the decision of what supplements are included?

Very involved. With The Looney Tunes Treasury (edited and packaged by Insight Editions, but published by Running Press), my editor, Kevin Toyama, had already lined up all of the book’s artwork and arranged for new illustrations wherever they were needed, so I was strictly the writer on that one. 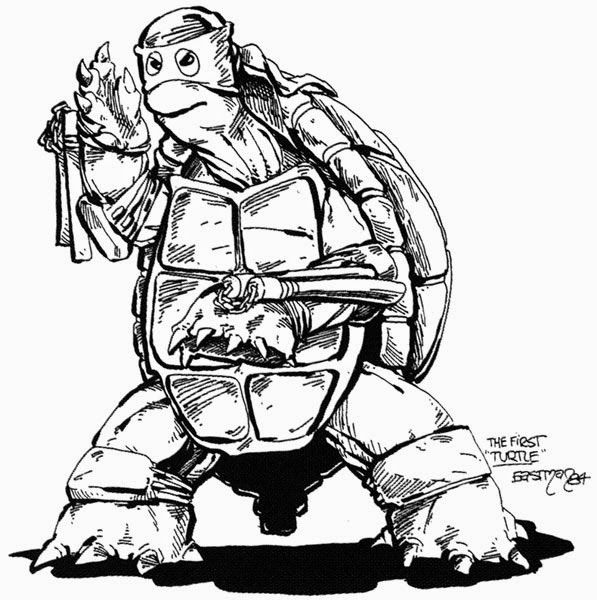 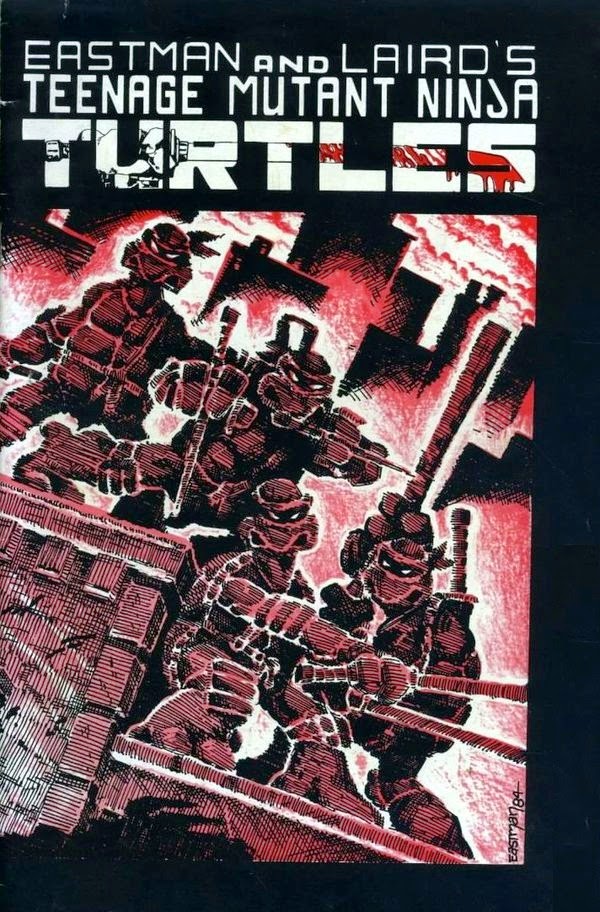 I’m really proud of the cover, which is based on Eastman and Laird’s original TMNT #1 cover, obviously. I sketched out a cover proposal with the original comic book’s Raphael, the pizza-loving Michelangelo from the 1980s animated series, Leonardo from the current IDW books (as designed by Kevin Eastman), and Donatello from the current Nickelodeon cartoon, showing off that gap tooth, one of many design elements from that show that I just love.

Anyway, I laid out the cover, then sent it off to Ryan Brown, who was one of the first artists hired by Eastman and Laird when they started expanding Mirage Studios in the mid-eighties. Ryan took my design and tightened it up, taking it up several notches, and then we sent it off to Kevin Eastman, who inked the whole thing in his inimitable style. Then it was off to Ronda Pattison, colorist of the current IDW TMNT comics, who was my first (and only) choice for the cover. I’m very proud of the cover, and the whole book, for that matter. It was a group effort every step of the way.

I’m talking to a few different publishers right now, and Chris Prince and I are talking about an idea that could be even cooler than the Turtles book. Nothing definite yet, though, and if any editors or publishers are reading this, please drop me a line. I’d really like to do some more creative writing, too, and would love to tackle a monthly comic book if the opportunity came up.

What are you currently geeking out on?

Lots of stuff right now. Catching up on some DC Comics animation on Netflix, looking forward to the Guardians of the Galaxy movie and really curious about the forthcoming TMNT movie, too. I’m a weekly customer at Fantastic Comics in Berkeley, California. My most recent haul had the latest issue of Saga (Brian K. Vaughan and Fiona Staples) from Image Comics, Daredevil (Mark Waid and Chris Samnee) from Marvel Comics, Superman (Geoff Johns, John Romita Jr. and Klaus Janson) from DC Comics, and Sam Henderson’s The Magic Whistle from Alternative Comics. And obviously I’m buying Turtles In Time by Paul Allor and Ross Campbell. So much good stuff out right now.

Donatello. Has been since that first episode of the cartoon. 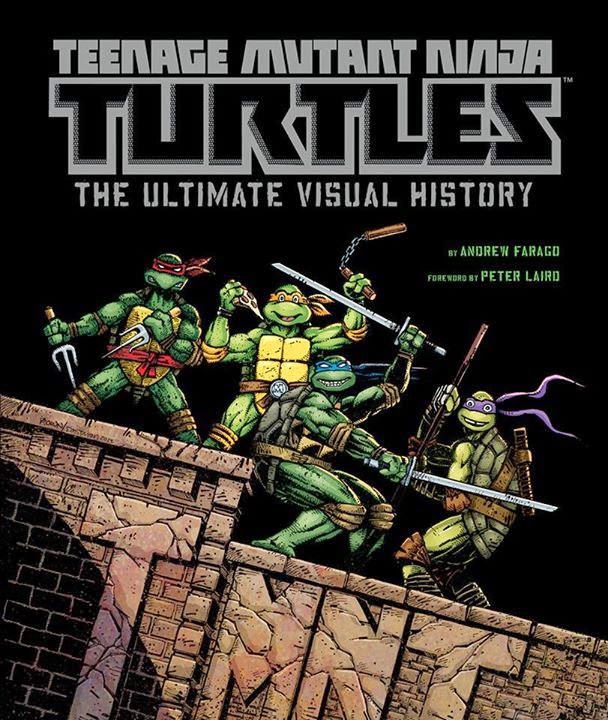