For the past three decades, Chuck Dixon has been one of comics’ most versatile storytellers, writing for virtually every major company in every possible genre.  Chuck was the primary writer on many of the Batman titles throughout much of the nineties and early 2000s.  Among the other titles he has written significant runs for are The Punisher, The Simpsons, G.I. Joe, Green Arrow, Savage Sword of Conan, Nightwing, Robin, Birds of Prey and Marc Spector: Moon Knight.

But, Chuck is also recognized for his creator owned work as well, including Lawdog, Evangeline, Valkyrie, and the reimaginings of public domain characters The Black Terror and Airboy.  Most recently, he’s written two Bad Times novels, Cannibal Gold and Blood Red Tide which places a team of Army Rangers in a science fiction setting.

Chuck and artist Estève Polls (Lone Ranger, the upcoming: Django Unchained/Zorro team-up) are collaborating on Sword of Wood, a new graphic novel that’s also being developed as a feature film.  The very busy Mr. Dixon took a few minutes to discuss the graphic novel that’s currently being promoted via Kickstarter. 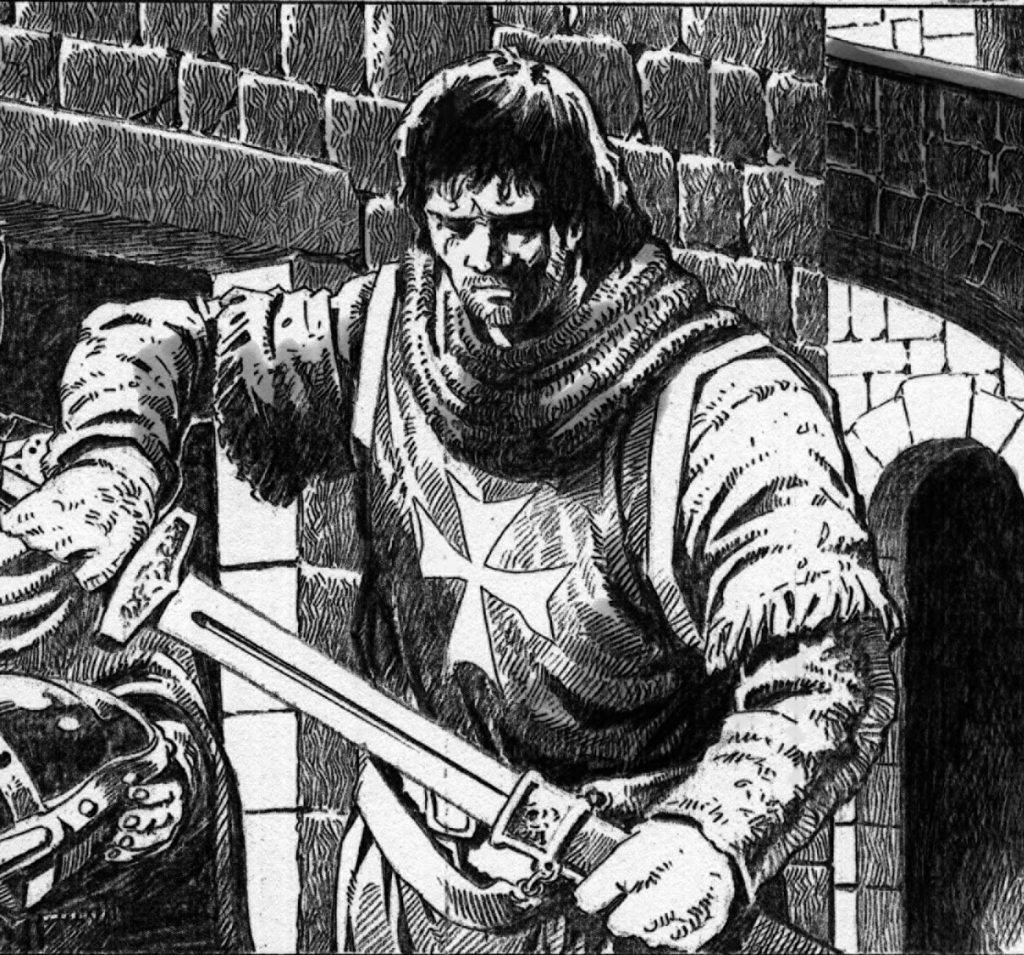 FOG!:  What was the genesis of Sword of Wood? Was it originally conceived as a film or a graphic novel or both simultaneously.

How did the project wind up at Framelight Productions?

You’ve been one of comics’ most extremely prolific writers. The industry has changed significantly since you first broke in. In addition to your past work for DC, Marvel, IDW, etc.; you really established yourself developing your own creator owned work. Do you think a project like this would have had a shot in the traditional comic book marketplace?

I do. The comic book market now includes public libraries, digital and book fairs. In those venues, unlike in direct marketing, genres other than superheroes are welcome. Sword of Wood will be welcomed by that audience as it’s a new twist on a tried and true horror genre. 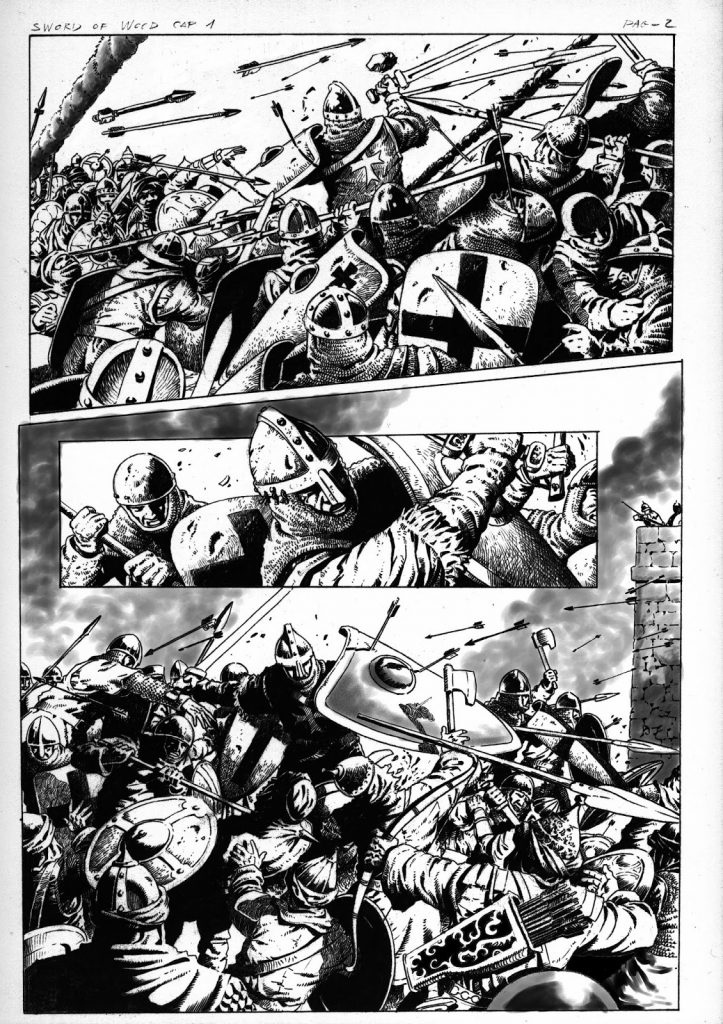 I’m assuming that the story of Sword of Wood involves several of your actual interests. What were your influences in developing the story?

I’m a history nut and have a toy soldier fascination with all things military. A chance to explore the medieval world with a horror story that pays attention to the daily realities of that world was the draw for me. I don’t want to give too much away but you’ll see things in this story you haven’t seen before either in a historical epic or a horror story.

Is Sword of Wood a finite property, or if it’s successful is it something that you can revisit?

We’re creating a universe here. Our initial story is certainly complete but the opportunities to go on are built in. 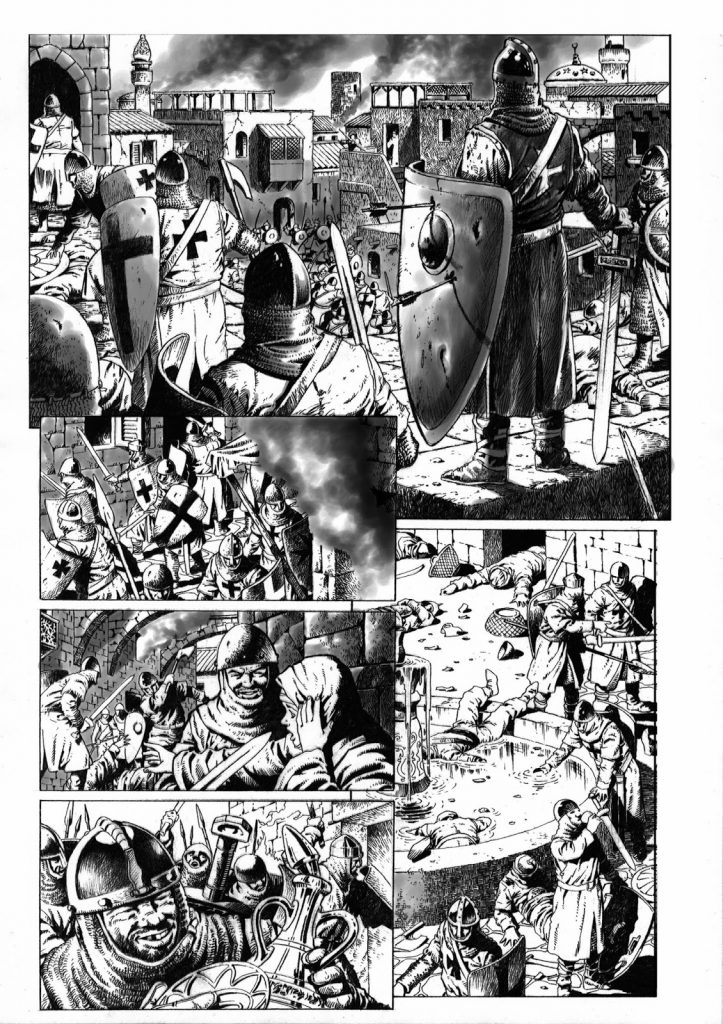 Framelight seems committed to keeping creator’s involved with the development of their projects. Are there any of your other creations you’d like to see on screen?

I have a lot of stuff in play right now for film, TV and games. But I’d absolutely love to have these guys handle any future properties or even create a fresh story tailored for them.

After the jump, check out the press release for the Kickstarter campaign.

Framelight Productions has announced that it has launched a Kickstarter campaign to allow fans to become a part of the upcoming Sword of Wood film franchise being built based upon an original story by Chuck Dixon.

Sword of Wood is an original work by Chuck Dixon taking place in a medieval world filled with terror. It tells the story of Lord William Corrington, the second baron of Corrinngton and Knight of Christ who is a warrior in the Holy Lands at the time of the First Crusade. Tired and disillusioned by years of war, William journeys home to his manor and village along with his squire, Pilsen, only to find the fields and hovels empty and his wife and children gone. While the men of England were out fighting God’s war, Satan has come to take England in the form of an army of vampyres. Now he’s on a new crusade against an army of the damned. The Knight does the only thing he can, track these demons down to determine the fate of his family. Featuring art by the great Esteve Polls, Sword of Wood is a yet to be published story that is destined to become a comic masterpiece.

Chuck Dixon is one of the most prolific authors in comic book history, having written the
adventures of Batman, Punisher, Conan, and almost every other character to grace the four color pages.

The book comes in conjunction with the development of a film being produced by Framelight Productions and Scott Mednick. In 2004 Scott was a founder of Legendary Pictures. Legendary’s unique partnership brought together $600 million dollars from private equity and created a 25 picture deal with Warner Bros., to establish an active production and finance entity. Mednick serves as Executive Producer of such motion pictures as the recent hits TEEN AGE MUTANT NINJA TURTLES and DELIVERY MAN, as well as other great films such as 300, SUPERMAN RETURNS, WE ARE MARSHALL, WHERE THE WILD THINGS ARE and 10,000 BC.

With a screenplay already in hand, the team looks to get the fanbase involved in the project at an early stage.

“Chuck’s story is one that you can’t get out of your head,” comments Framelight’s Erb. “Once I read it, I knew it would make a great film.”

“I first met Chuck in 1984 when he did ‘Evangeline’ for Comico,” laughs Framelight’s Robinson. “I worked in a comic shop at the time and he would thrill us with his stories before anyone published them. It’s an honor to work with him on this one. That’s why we opened it up to the fans. Sword of Wood should be a comic before a movie and now you can share in the development with us, Chuck and Scott. Its like being on the inside of the next cool thing.”

“This is an exciting opportunity to develop something I’ve created as a comic property as well as a film property” begins author Dixon. “The level of involvement with Framelight is something new for me; guys who are as knowledgeable about the comics’ medium as they are about the world of movies. Sword of Wood is an idea I’ve been working on for a long time and I feel good letting these guys run with it.”

Check out the Sword of Wood Kickstarter HERE!

Framelight Productions is a film production company founded by entrepreneur Robert L.
Robinson, Jr., and film production executive Jeffrey D. Erb in 2008 that partners with comic book, novel and other Intellectual Property creators and owners in the process of bringing their creations to the screen. With the great magnitude of creative talent and mythologies they have created, Framelight has developed a model that revolves around the most important asset in the equation, the creators. The company has currently optioned numerous comic book properties and novels, and the pair’s production credits include six feature films.