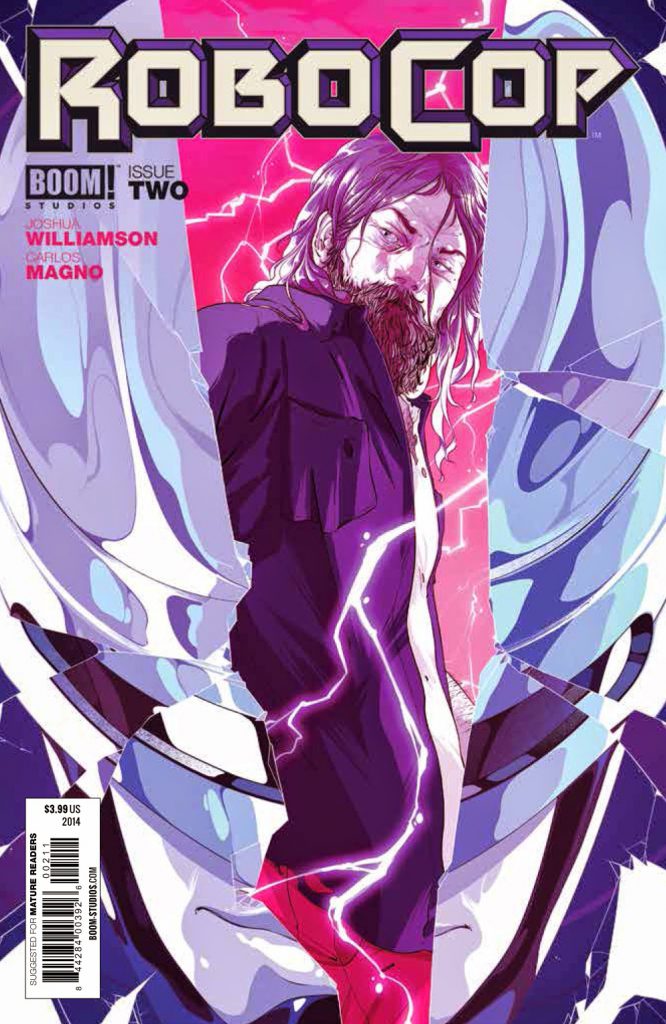 RoboCop was the first R-Rated movie I indulged in, long before I was deemed to be the appropriate age by the Motion Picture Film Association of America.   Ah, babysitters can be a child’s best friend.

I’ve always had an affinity for the story because of how it doesn’t take itself too seriously while taking everything else seriously to produce the story of a cybernetic law enforcement officer.

Jumping from the silver screen to the page, the majority of RoboCop comic books are horrible because they fail to capture, at least, the core essential elements of the titular character.

I stress “at least” because there are other items in the series that create a consistent mythos for the tragic and heroic tale of Officer Alex J. Murphy.

Joshua Williamson gets it.

Instead of putting a completely different spin on the character, or trying to make things better or worse for the sake of shock value, Williamson brings us everything we loved about the first film while cleverly creating a narrative filled with action, suspense, mystery and intrigue.

While RoboCop is the hot commodity, Old Detroit is a character unto itself. Without it, essentially, there is no story. Williamson injects a lot of gratuitous violence and civil unrest, all stemming from the regular mood of the city which is inflated by a new gun control law.

There are a couple of new characters introduced, and one of them operates on both sides of the law, which makes me wonder if OCP knows this or simply doesn’t care.

The dynamic between Murphy and Lewis is spot on and brings in some new elements that could put an end to their partnership. Their reaction to this possibility was both mysterious and hand-to-the-head obvious at the same time because while the human factor made you think one thing, prime directives called for another. There is also the tease of serious danger coming down the pipe for Robo as the baddie notices things about his abilities that could be used against him.

Carlos Magno does a phenomenal job of making the city look like a disgusting cesspool that is beyond saving. There is a chase scene in the middle of the book that perfectly shows how in sync the creators in this book are. A suspect escapes and RoboCop says he will pursue on foot. Chalk that up to things that make you go hmmm because he can’t run, power walks at best, no jet pack, and the suspect has a head start. What’s a RoboCop to do?

Well, jump off the roof onto the suspect, of course! That image will have me thinking for days because he is the absolute last person I’d ever want diving after me from a great distance. Geez, I would beg for my Miranda Rights before he could hit the ground.

When most people see a RoboCop comic book on the shelf, that sense of immediate recognition takes place, and is usually followed by memories of previous comic incarnations, leading to the buyer passing on the product. I really hope that Williamson and company can keep the established tone consistent because it will go a long way in making this a series that stands out.

They are off to a great start and hopefully, you will hand this book to the cashier while screaming “I’ll buy that for a dollar.” 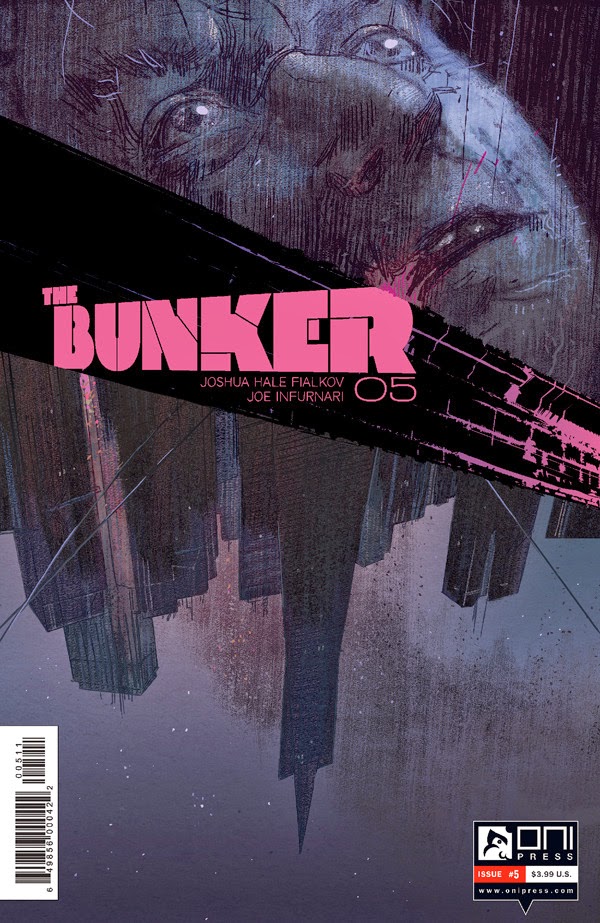 This series is good. It’s really good. I can’t believe I waited this long to read it. Bunker is the story of five friends who one day find a….you guessed it, bunker in the woods, and inside find letters for each of them written by their future selves in order to prevent a mass destruction.

What makes this a fascinating read is Joshua Hale Fialkov’s ability to creatively state all the facts but none of the answers.

The five main characters play a part in future doom, but of course, none of them believe it, even when they read the letters. With each passing issue we learn more about them and start to see things in their personality that could tip the balance of destiny in either direction.

As someone who would like to see the world go on, I found myself ridiculously engaged as a character would still do something even though they know what the result is going to be. Five issues in, things get more intense when Grady, who plays a bigger role than most of the five in coming apocalypse, meets his future self, who appears to be a scumbag. However, there are a few plot points sprinkled in that suggest otherwise. Present Grady appears to be a harmless slacker but things might not be what they seem.

This particular dynamic teases the possibility that the world is screwed no matter what happens because knowledge isn’t the power it’s cracked up to be, especially when people die and you could have prevented it.

Joe Infurnari’s art is perfect for the tone of the story. There is a lot of pressure on these characters beforehand, and knowing what they know has increased that tenfold. The illustrations depict a present with the odds not in our favor and a future that is too bleak for words. The Sixth Gun may be the crown jewel of the Oni Press franchise, but a new contender has emerged. Bunker reads like a story that would make for a fabulous television show.

It has characters that you can either love or hate depending on your take of their circumstances while captivating you to the fullest. This might be my new favorite series. 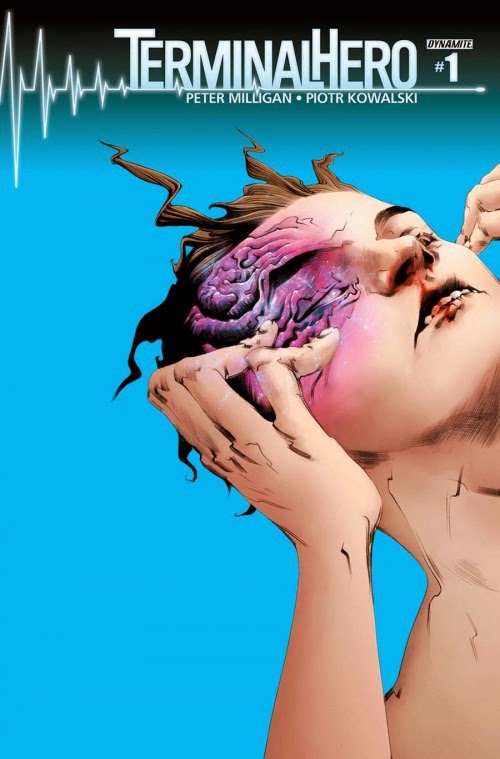 Like most people, Rory Fletcher never thought he would get a brain tumor.

The bad news leads to an experimental treatment and some crazy super powers emerge.

The idea behind gaining extraordinary abilities at the expense of one’s mortality seems to be an enthralling concept for Peter Milligan.

Plot points build and build throughout the book as the reader gets a taste of what Rory can do,

Speaking of Rory, being a doctor gives him a better understanding of his illness. Powers added as a side effect to a possible cure makes him do some crazy things such as seeing dead people.

Without fail, Milligan makes it easy to sympathize with Rory with acts such as turning down a pity lay that he really wanted because he felt the young impressionable lady would regret it later.

Piotr Kowalski depictions shine most during Rory’s scenes of madness and Kelly Fitzpatrick colors them in nicely with fiery reds and oranges.

There is one panel that made me think back to a couple of weeks ago when I was out to dinner and this loud obnoxious lady at the bar kept bragging about sexual exploits and G-string fisticuffs on the Las Vegas strip. Rory had a similar situation and his subconscious stitched the woman’s mouth shut. I chuckled, a lot, but I would never condone such a thing in real life.

This series has a lot of promise, but this issue also shows signs of being a first issue wonder. Besides Rory, the rest of the characters are merely plot devices and that could get old real fast. The ending produced one of those uh-oh moments for Rory, with a little mystery sprinkled in, that will make it hard not to come back next month. 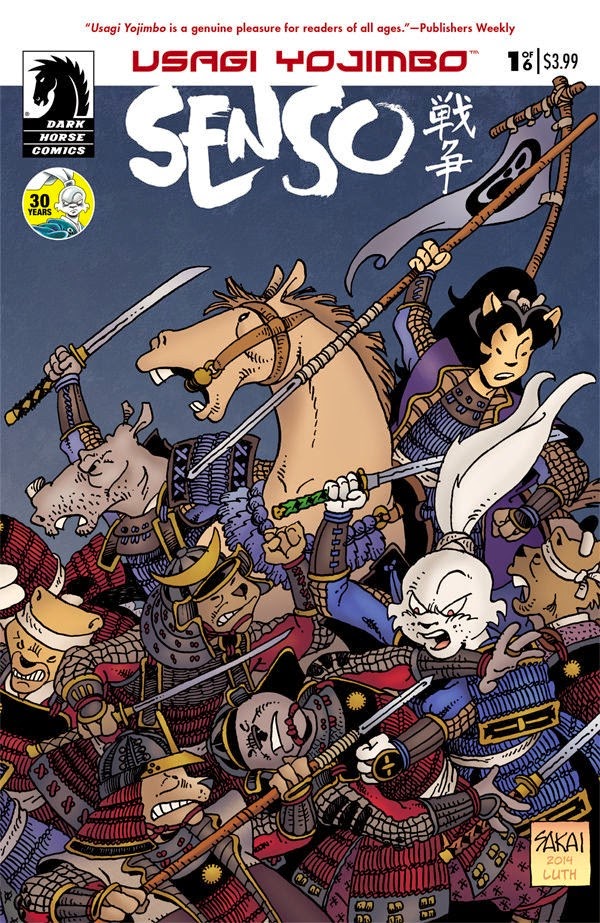 I was at Boston Comic Con over the weekend where many of the industries most talented writers and artists were on hand to sign autographs and converse with fans.

Some fans will support the creators by purchasing some of their work. Others will plop a stack of fifty books on the table, with the expectation of having them all signed without a single “hello” or “how are you today.”

As I hovered around the table of Stan Sakai, I noticed very few people brought books from home and everyone who I could see bought something from Sakai.

I overheard a few people in line and around the table that said they would have brought something from their collection but they wanted to support Sakai.

I think that speaks volumes to the love that people have for his work.

A rabbit Ronin sounds silly but there is a certain majesty to Usagi Yojimbo that you tend to forget about bunny ears flapping in the battle field and treasure the hallmarks of the character.

This latest installment takes place 20 years in the future where Usagi leads Lord Noriyuki’s army into battle against Lord Hikiji and his troops. There are several subplots throughout the book and they were perfectly executed on all fronts. Lord Noriyuki’s refusal to let Usagi use a secret weapon out of ego infuriated me because he cares more about his reputation as a master strategist than the body count.

Later on in the book, someone near and dear to Usagi’s heart is in danger and the look on his face when this occurs was heart breaking and terrifying at the same time. The fear of loss is something you never want anyone to go through, but soon enough you realize this is Usagi Yojimbo we’re talking about and he is about to make someone pay. The reason I get so into this series is because of how descriptive the artwork is, especially when it comes to body language and facial expressions. Seeing characters mad in comics is nothing new, but Sakai’s depiction of an angry panda general is so good that I don’t need a word balloon to know what the character is thinking.

Dark Horse promoted this book by hyping a science fiction twist to the story and boy, did they deliver! It was simple and extremely effective and that’s all it needed to be because this new element is something that has never appeared is this world before. I can’t wait to see how, not if, but how Sakai works outside of his wheelhouse while keeping everything fans love about this rich mythology intact. 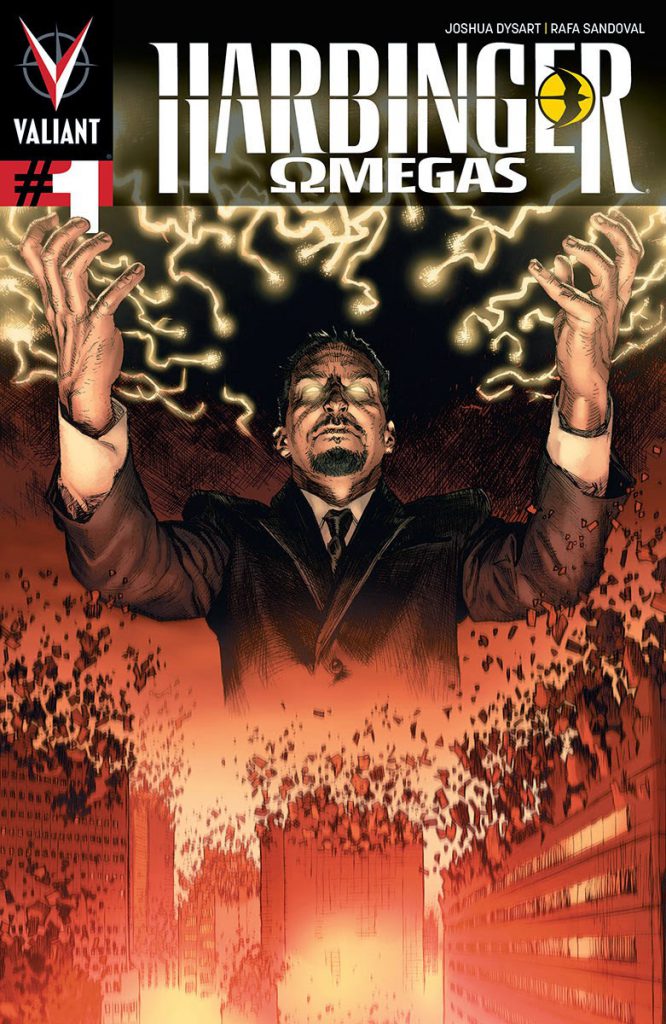 Man, I’m way late to the party on these Valiant books. I’ve been doing a lot of make-up reading to become more familiar with the universe, and so far, I’m very impressed.

The book opens with the volunteer surrender of Toyo Harada who has been exposed as all kinds of evil. Of course, he has no plans on waiving the white flag and makes a destructive statement.

The second half of the book deals with Harada’s former team, The Renegades and how they are leading separate lives.

This book is new reader friendly and Joshua Dysart’s character development gets you familiar with them and their strife very quickly.

The illustrations are amazing and makes you feel a part of the spectacle unfolding with each turn of the page. My favorite panel of the week shows Harada using his powers to deconstruct missiles that were shot at him right before they explode. I have a feeling that the events in this three part series are going to be critical to the comings and goings of the Valiant universe.

In other words; BUY IT NOW!