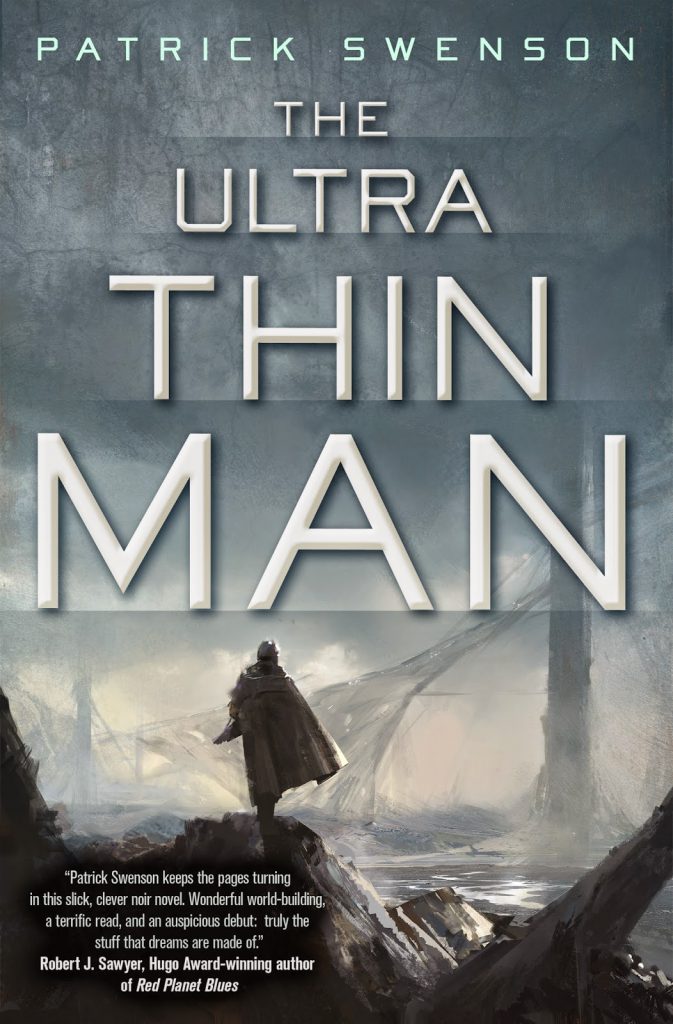 Patrick took some time out of his schedule to write a guest post detailing the pop culture influences that found their way into his life and ultimately, his work.

So many books, movies, and television shows influenced The Ultra Thin Man that I find it hard to narrow everything down into a manageable list. I will (sadly) admit that for whatever reason, I never dove into comics as a kid. But at least that helps whittle down the list.

When the original series of Star Trek premiered on television, I was seven years old. I never missed an episode. It came on so close to the dinner hour that I usually had to ask to be excused from the table early so I wouldn’t miss the start.

We were lucky to have a color television set. The show scored high ratings among viewers with color TVs, but black & white TVs were still the norm, and the show didn’t make it past three seasons.

For a seven-year-old, the scale seemed expansive, the ideas breathtaking, the five-year journey to strange new worlds a weekly promise of awesomeness. Star Trek fostered my love for space opera, pulpy adventure, and (although I didn’t appreciate it at the time) fascinating political and sociological commentary.

In junior high, I came across the novel Dune, which might be the biggest influence of them all in regards to my love for this crazy genre.

I picked up the book and devoured it for the same sense of awe and wonder I’d felt as a younger kid watching Trek. The politics, economics, ecological awareness?

Yeah, right over my head. But my god, the story. A galactic empire. Royal families fighting for a single, important planet. Sandworms. Spice. Interstellar travel.

I loved this book.

Then came the summer of 1977, and I’d just finished my senior year in high school. My best friend and I were cruising around Kalispell, Montana, and we thought we might try this new movie called Star Wars that had just started playing. Movies came pretty late to Montana in those days. We had no idea what we were in for. When it finished, we got in line for the next showing. By now, everyone understands the film’s myth-making roots, but more than that, this is a fun, rip-roaring adventure with a tip of the hat to Flash Gordon and movie house serials and swashbuckler movies. This was the kind of fun I wanted to write about.

I’d also point to some popular black and white films as influences, such as Citizen Kane for the big mystery surrounding the name “Rosebud.” A single, seemingly unimportant object becomes vitally important to everyone. You’ll catch that spirit in The Ultra Thin Man. How about Edmond O’Brien in the original D.O.A. from 1950? Fabulous film noir. You’ll see a little of Frank Bigelow in my character Alan Brindos. Add a dash of The Postman Always Rings Twice, a pinch of The Big Sleep, a teaspoon of The Killers, and you’ve cooked up one of my secret joys.

It probably goes without saying that Dashiell Hammett’s novel The Thin Man was an influence, as was the 1934 film. Not so much for that particular plot, but the detective story in general. The witty dialogue. The one-liners. The back and forth repartee between the lead and other characters. Besides Hammett, I’d single out some of my favorite mystery writers, all of whom are masterful writing dialogue: Robert B. Parker, Elmore Leonard, Raymond Chandler, John D. Macdonald, and James W. Hall, to name a few.

The famous Bradbury Building in Los Angeles appeared in D.O.A, and it crops up in many other noir films, including Chinatown and one of my favorite films, Blade Runner. The Bradbury’s design was inspired by science fiction (Edward Bellamy’s Looking Backward). The image of that building in these films, often filmed in darkness, prompted my own love of the unknown, for SF architecture, and for futuristic extrapolation. Cinematography, a hallmark of the best noir films, parallels, I think, a novel’s worldbuilding, its pacing, and cool factor.

Blade Runner (and the novel it was based on, Do Androids Dream of Electric Sheep? by Philip K. Dick), was my Star Wars in college.

Blade Runner appeared somewhat anti-climactically in the theater in 1982, and I remember sitting with friends, watching that brilliant opening sequence on the big screen, thinking: “What the hell is this?” I watched, poised somewhere between awe and confusion, and couldn’t help but wonder about the larger picture outside the frame.

The film didn’t bow down to audiences (well, except for the sometimes corny voiceover), and it boldly made a prediction about the future of our culture and society.

The best science fiction does this. The most popular visions of the past, present, and future do this, no matter the art form. I hope I’ve done this with The Ultra Thin Man.