Jim and Gail were responsible for a longtime run on Secret Six, the DC villain team book that will be returning to the New 52 with Gail on writing duties. 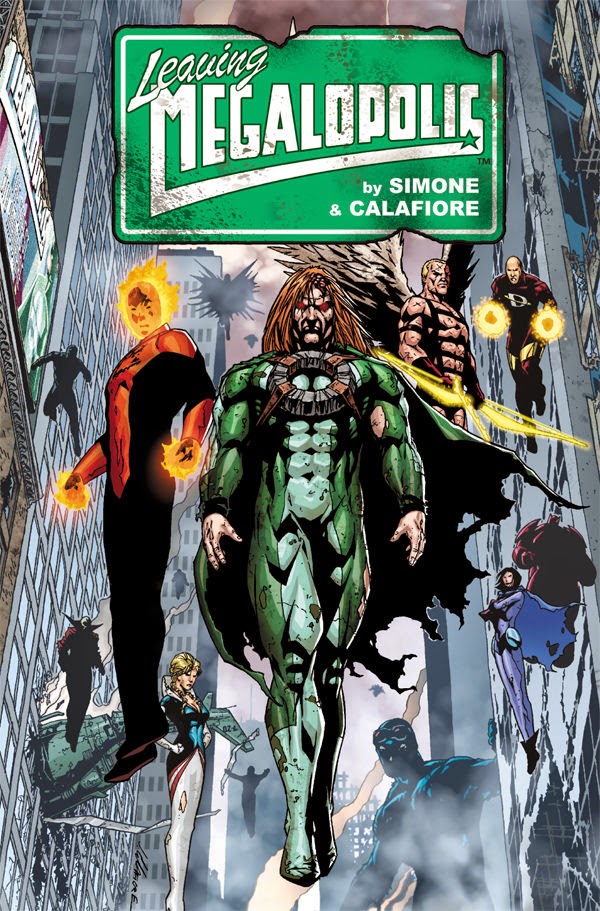 Leaving Megalopolis stands in the grand tradition of books going back to Watchmen. At the center of the conflict, innumerable super powered beings take over and turn on the innocent humans they at one time were sworn to protect.

Mina is our hero — a cop with baggage just trying to get out of the city in one piece.

Strong analog characters to popular super heroes have been created for Leaving Megalopolis.
The Man of Granite — Overlord — is our Superman, Hulk and even a ‘grim and gritty’ Batman. In this world, comics also celebrate the heroes, and references and an excerpt from issue #47 of the fictional Overlord comic is the turning point that the comic writers make Overlord a dark hero. 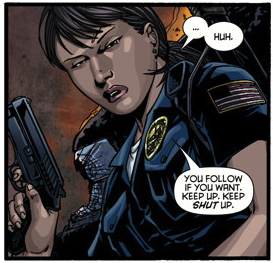 Mina is the foil to this team of rogue supers.

Comparisons could easily be made to The Walking Dead’s lead, Rick Grimes, but those comparisons would be short sighted.  Mina’s actions in the book are more complex than any decisions that Rick makes in his fatherly leader role.

First off, there is something about her police uniform that is revealed later in the book that varies her origin from Rick heading to the police station after awakening in the hospital.

We flash back to Mina’s past, her childhood pets, her relationship with her family members and are given a complex and independent female protagonist.

From suffering and witnessing abuses as a child, Mina is shaped into being a powerful survivor.

Gail Simone is almost single-handedly providing the comic market with believable, honest and strong female leads and we love her for that. From Batgirl to Red Sonja and now her original characters in Leaving Megalopolis, these ladies are tough as nails and are at once natural born leaders and fiercely independent.

Mina collects others looking to escape the wrath of the Crazy Capes. It’s a rogue squadron, definitely, and to make another The Walking Dead comparison, we see how others adapt to the dire situation. 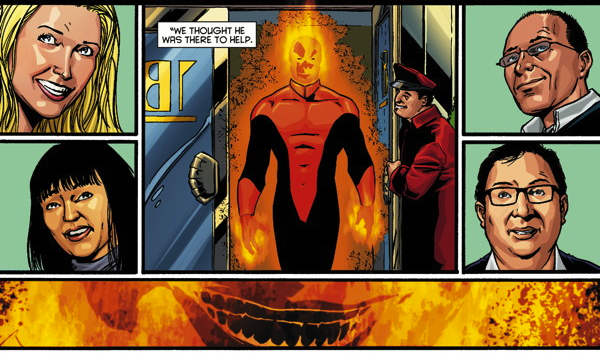 One group sacrificed a new innocent life to The Red Flame just to survive. In tough times we see a variety of reactions, some good, some bad and some without judgement. There are plenty of Zombie Apocalypse survival guides, but what would happen if our comic book heroes came alive and turned on us? We won’t be prepared!

Hands down, my favorite meta sub-genre of modern comics are stories like these that comment on mainstream comics by creating familiar heroes but saddle them with an evil streak or not-obvious motivations.

Just as books like Gødland present “Kirby-as-genre,” Leaving Megalopolis and books like it, if I may be so bold create a “Watchmen-as-genre” aesthetic. 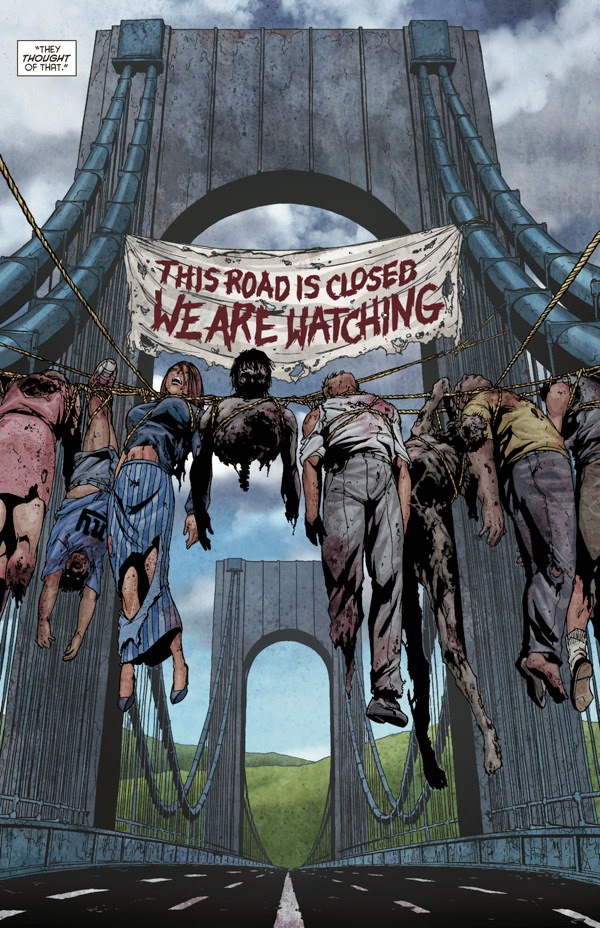 Other examples of stories in this tradition are Peter J. Tomasi and Keith Champagne’s The Mighty and also Mark Waid’s Irredeemable family of books that includes a villain turned good in Incorruptible as well as his Thrillbent comic Insufferable about a father/son superhero relationship. One might also extend the branch out to Paul Jenkins and Carlos Mango’s battle royale book, Deathmatch.

A credit to Leaving Megalopolis artist Jim Calafiore for the character designs for the superheroes in this book that have similar powers to familiar heroes but are set apart by their uniqueness. Carlos Mango is the only other artist in recent books to come up with such a menacing and detailed roster of hero/villains, both artists should be praised and credited for such a task. 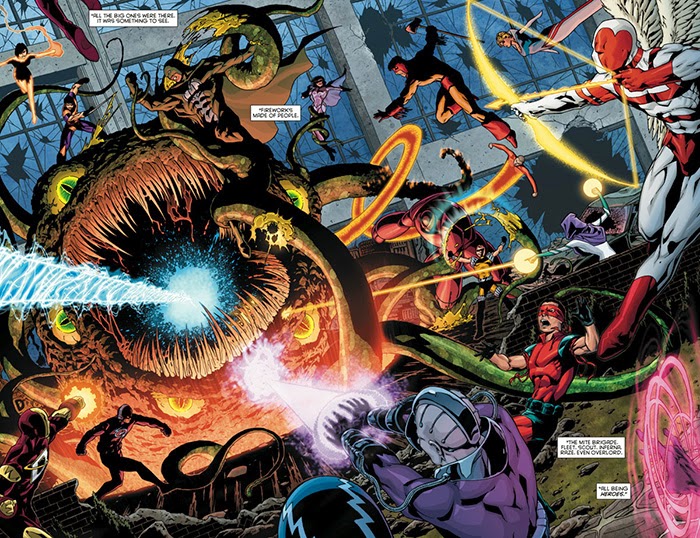 Successful Kickstarters are a blast to back, and we are happy that now Dark Horse has made this one available to the general public on sale. I think we may be seeing more of this as the days of the comic market continue to adapt to the Kickstarter ecosystem.

Whereas a few years ago, your best bet was to pitch comics to companies. Now publishers can make something happen with your existing Kickstarter work and get you more exposure. Oh, and it doesn’t hurt to have one of the top writer and artist teams on your book either!

Please take a chance with this book, you will be glad you did.