From recent oysters Undertow to Low to classics like Namor the Sub-Mariner, the ocean depths are rich subject matter for comic books.

Canadians Ricky Lima and David A. Bishop are culling the deep for an original graphic novel. The Kickstarter Staff pick is nearly funded for Deep Sea, and the guys are here to tell us about it before they poetically reach their final goal.

FOG!: Thanks for joining us today. Just finished the book, it truly was a different kind of story. Care to share about the origin of Deep Sea? 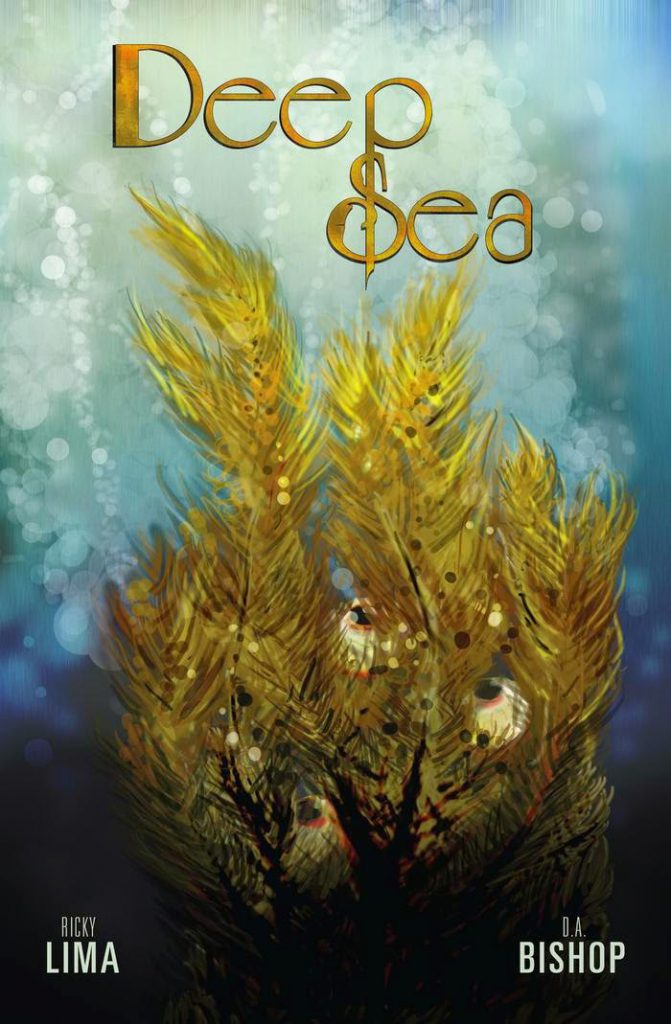 Ricky Lima: Deep Sea started from my desire to collaborate with David. He does some great work and I just wanted to get in on the ground floor of David’s Super Stardom. I approached him with the idea of doing a very small minimal book and he was interested.

We decided to make the entire thing red and blue and the idea for the story came from that color scheme.

After the book was so incredibly well received we decided it’d be in our best interests to make a longer sequel.

David A. Bishop: I did a lot of doodling at work while waiting for stuff to happen and I did this one Superman doodle that Ricky kind of dug and we just started chatting about doing something.

We were going to do it in blue and red ballpoint pen for kicks but it just grew from there.

You posted an 8 page preview of the book on the Kickstarter page. How long did it take to develop the idea after the initial short story?

Ricky: After the initial 8 pages the rest of it kind of came easy to me. I feel like because the ground work was already laid out in the 8 pages the rest was kind of a no brainer. I wanted to just take the themes and ideas we created in the original and expand on them.

So ideas of Gender, City, Industry, Loneliness, those were ideas that were already present in the graphic novel even before I wrote it. So it really was just a matter of filling in the blanks.

Can you tell us about the feedback you’ve received after becoming a Kickstarter Staff Pick, and why do you think they chose Deep Sea?

Ricky: The benefits of being a staff pick are pretty great. We’ve seen a lot of traffic come to our page through that particular avenue. It’s very important for a Kickstarter to have support come from people you don’t know. A campaign can’t survive entirely off of the generosity of ones family.

You really need to prove to people that your book is worth backing. Why they picked us I have no idea. I want to say it’s because the book is the best but it’s probably because someone at Kickstarter likes horror thrillers! That person is my hero.

David: I think it’s been very helpful to have that and Ricky’s right, we have had a lot of traffic come through, all of which we are pretty grateful for. There’s a lot of Kickstarter projects out there so have a little nudge like that gets us more eyeballs than we would have otherwise. I’d like to think that we just happened to catch someones eye.

There are a lot of issues being explored here, from motherhood to environmental conservation all told though the lens of an underwater sci-fi story. Are the both of you working on the story together? Does the art influence the story and vice versa?

Ricky: The art is the story! Ha! Like I mentioned before, the art was the first thing we thought about. It was that blue and red color scheme that influenced what we’d do with the story. We had an interesting process with Deep Sea. It was almost as if we both worked on the book separately. David and I brainstormed ideas at the beginning and then I wrote the script without input from him. After that he took the script and developed it into the awesomeness it is now with very little input from me.

Often times I feel like over management stifles creativity and makes a project to monotone. Having both two voices in one book combine to tell one story is amazing and I think that’s what gives Deep Sea such energy and excitement. 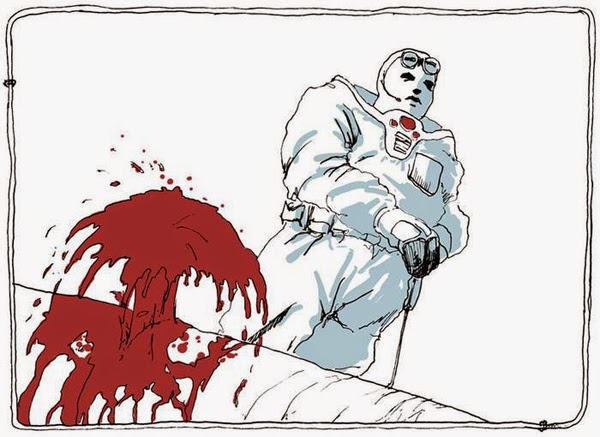 David: Well I don’t know about “very little input” I always brought the questions I had directly to you, Ricky.

Ricky and I would talk about the implications of changing things around and we went with what we both thought was best. At no time did I ever dictate to Ricky what I would and would not do though. I don’t think that makes for a healthy working relationship. There was a lot of positive back and forth when it came to bringing the script to life and I think that is something that has come out in the book. Sometimes it was a simple matter of switching the suggested panel flow around. I think the biggest change we made was the character of Amber.

Amber was originally supposed to be an old scruffy homeless man, which we could have done and it would have been fine. We got to talking though and we ended up changing the character to something that was a little less expected and by making that change I feel we’ve improved the story significantly as well as making the character of Amber a more intriguing citizen of the city. 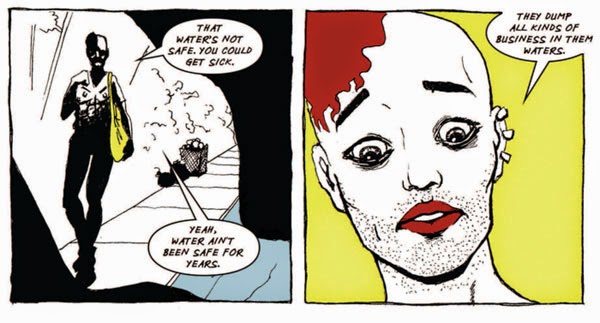 Have you Kickstarted comics before? What was your favorite part about picking rewards?

Ricky: This is my first Kickstarter, and it’s scary as hell. I’ve been a nervous wreck all month! The thought of failure to me can get overwhelming. It’s been an interesting process and one I think everyone should try once.

Overall it’s pretty exciting. A lot of the tiers we have are conceptual in nature, so they’re really dependent on what the audience wants, like the poems, so I wouldn’t say any of it was my favorite. It is however going to be super fun to write a billion poems, so I guess I’d say that was my favorite part, thinking of all the poems I’m going to write.


David: I’ve been involved with some Kickstarters before, but nothing quite so directly. Ricky is right, though. It is incredibly nerve-wracking. We’ve been working on this book since 2012 so it would be heart-breaking to not hit our goal. We are prepared for that, however. I think one has to prepare oneself for the possibility of things not working out, but to really focus on the positive and spreading the word.

We have a couple print rewards from some really great artists like Shane Heron, who Ricky does Black Hole Hunters Club with and Jordan Brown, whose work I’ve been a fan of for a while now. Also, if I’m going to be completely honest, I get really pumped when I see that people want to buy original pages from the book (and there’s still a few left!)

Any advice for other creators when making rewards? I love the poem concept. How did that come about?

Ricky: Going off of the last question I can tell you what my least favorite part is, money! I had some pretty grand ideas on reward tiers when we first started. I’m talking sushi dinners, trips to the aquarium, t-shirts, everything! But I was also having a hard time working it into a budget and getting a solid Kickstarter goal together. I was getting pretty stressed out by all of it.

So I had to step back and reevaluate what we were doing. I found that simplicity is best, and now I’m super happy with what we have to offer. So my advice to other creators is keep it simple. Don’t over think things and keep everything easy to ship. I had an idea to commission someone to make a commemorative plate for Deep Sea. Like a giant, fragile, ceramic plate! Could you image the shipping costs on that?! It’d be insane! What was I thinking! So yes, keep things simple and easy to ship.

The poems actually came from the original Deep Sea. When we released it David said he was going to sketch for all the people buying the book and I was a little jealous. I wanted to do something for people to, but since I was a writer I couldn’t do much. So I figured poems are almost like sketches right? So I wrote poems for everyone who bought the book. People really loved them and poems became synonymous with Deep Sea. We just had to bring it back for the graphic novel.

What’s next after Deep Sea for the both of you?

Ricky: For me I have Black Hole Hunters Club to work on. We’re really pushing for a publisher at this point. I think it’s a great book and I think it’d do really well under some of the bigger publishers. Besides that I have a couple of other stories in mind and some people I want to work with, but it’s really nothing solid yet. I think getting published is a big goal for me at this point.

David: I’ve got a few things stewing in the pot right now but I’m actively working on the follow up to my book Of Stone and also a hard sci-fi story called Valley Of Stars which I’m dying to get out.

Ricky, can we sign off with a short Deep Sea poem for Kickstarter Korner?

At the Korners of the world
Are Oceans so deep
Ones filled with things unseen
But a shop stands atop
The wild blue ocean
And every so often
They pull up a creature
And show it to the world
Because this little shop
Is the Kickstarter Korner.