For the second part of this listicle, I continue to take a look at the most soul destroying cartoons to ever haunt a childhood. 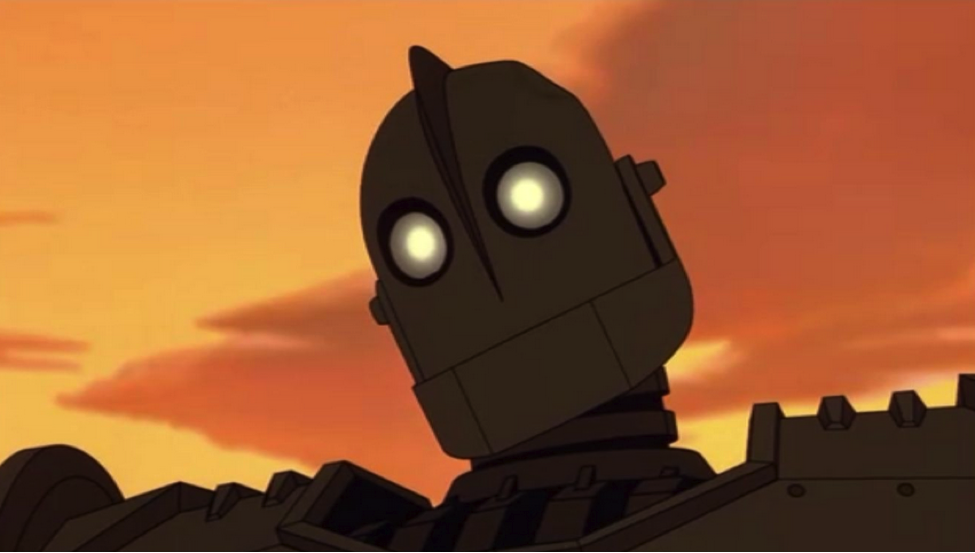 Brad Bird’s nod to the robot movies of yesteryear is a pitch-perfect masterpiece about a young boy and his child-like weapon of mass destruction.

After getting hit on the noggin during his fall from space, the Giant forgets his programming to maim and kill, and instead spends his time with new buddy Hogarth playing games, playing Superman and learning the lesson, “You are who you choose to be.”

The most devastating moment:  In an attempt to save the planet from the mass destruction of an armed atomic bomb, the Iron Giant decides to sacrifice himself, flying off with the weapon far away from Earth where it can do no damage. Remembering Hogarth’s words in the last few seconds before his demise, the Giant decides who he wants to be with a final word: “Superman.”

Mouse and His Child 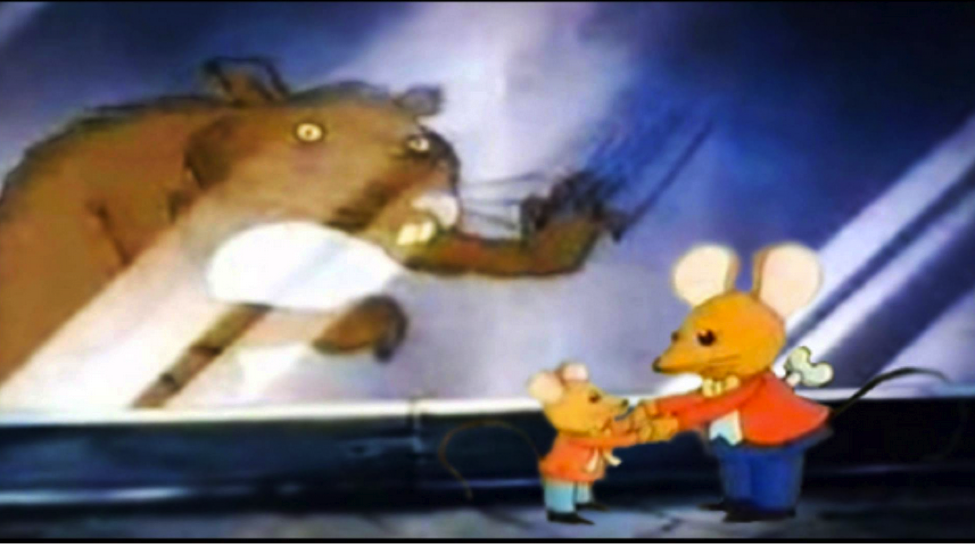 Back in the early days of cable when Nickelodeon was made up of primarily of Canadian children’s shows and Today’s Special, weekday children’s television was limited to whatever you can find to watch that wasn’t a soap opera or HBO’s repeat showing of The Chosen. Somehow Mouse and His Child made it to the constant rotation, thus giving a generation of children recurring nightmares of being bludgeoned to death by a rock.

Based on the novel by Russell Hoban, the film features a toy wind up mouse who is forever linked with his young son as a novelty wind-up tin toy. The duo go on a great quest to become “self winding” only to be forced into servitude by a sewer rat named Manny after a nasty bump off the counter of a toy shop. 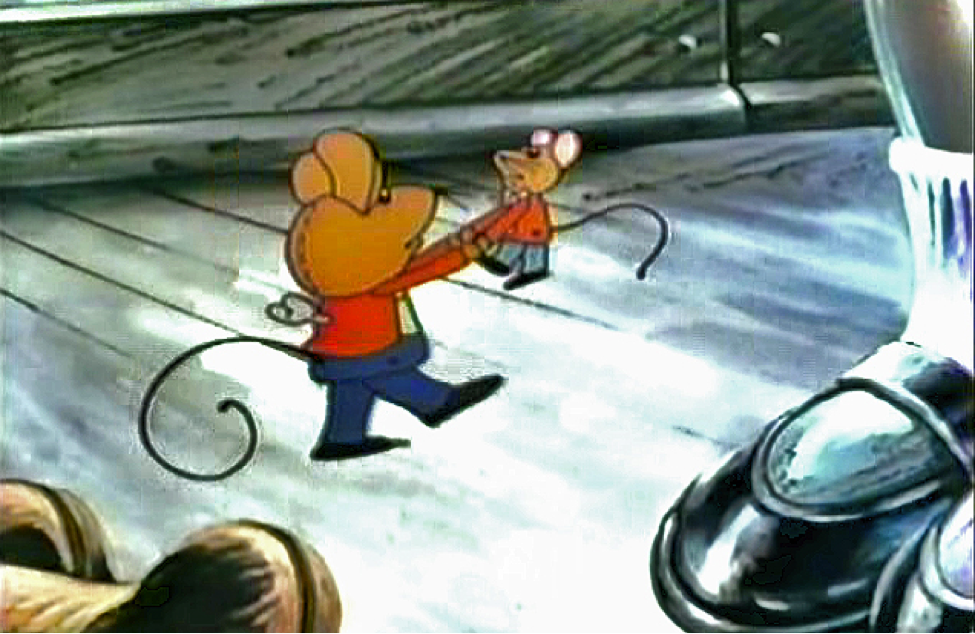 The most devastating moment: After Manny gets fed up with the adorable duo, he decides to end them by smashing them with a rock, which the audience gets to witness from the point of view of the defenseless mice as they scream for help with each slam of the stone until an overwhelming darkness takes over. 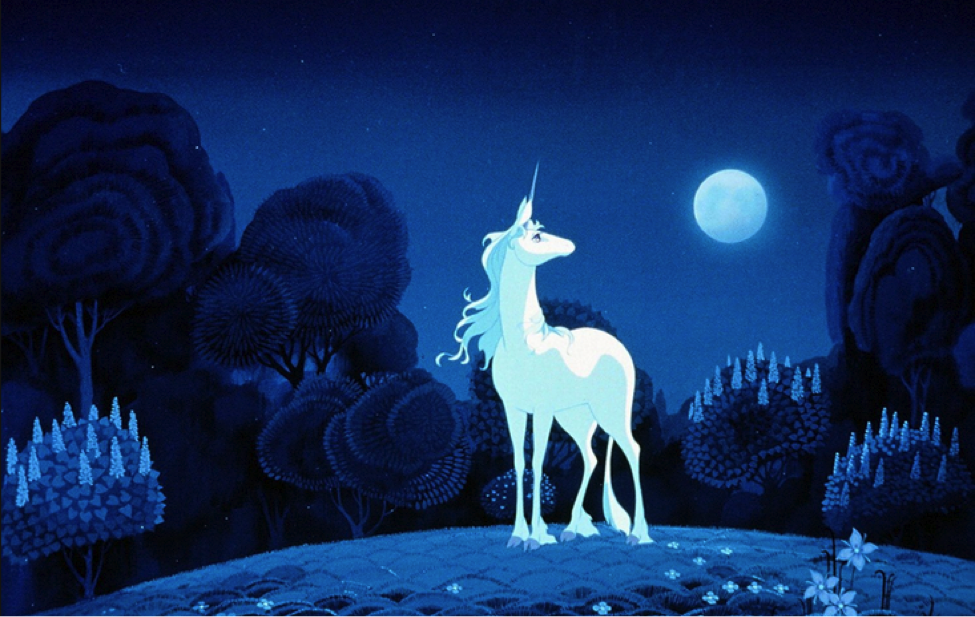 While The Last Unicorn is actually more trippy than scary, it is not without its fair share of blame when it comes to therapist bills for the Gen-X sect.

Voiced by Jeff Bridges, Mia Farrow and Alan Arkin, the Jules Bass and Arthur Rankin, Jr. toon feature was carefully crafted to win the hearts of young girls but without the foresight of a toy line.

The story follows the adventures of a unicorn as she hunts for others of her kind. Along the way she meets a bumbling magician and a dumpy cook, becomes human, falls in love with a prince, fights a bull and frees her people. And all to a soft rock soundtrack by America.

And that, my friends, is definition of magical. 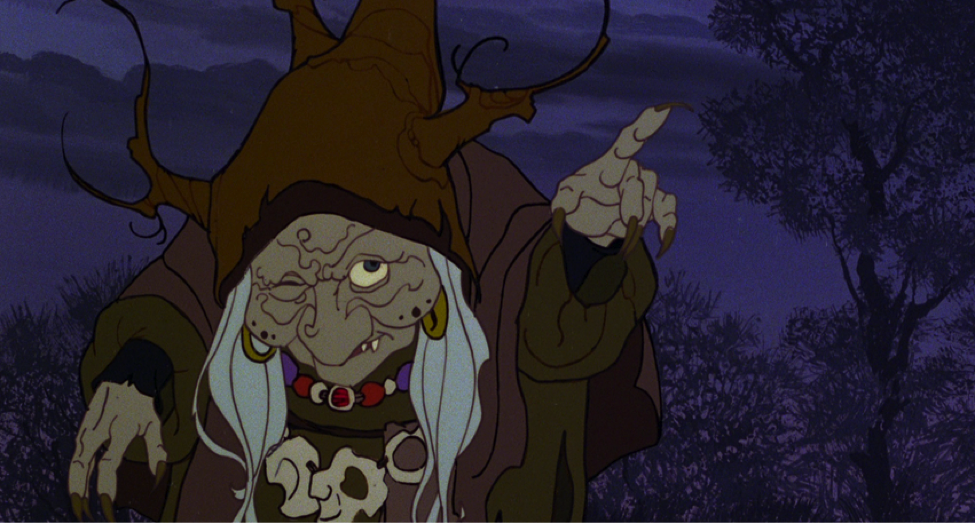 The most devastating moment: During the course of her journey, the unicorn is kidnapped by Mommy Fortuna, a witch with a carnival menagerie of mythical beasts, both real and fake. Among her specimens is the harpy Celaeno,  who is none too pleased to be entering a life of showbiz.

When the unicorn frees the immortal harpy, the winged creature repays Fortuna by eating her.

The ‘80s were a very confusing time for many a unicorn-loving child.

The Secret of NIMH 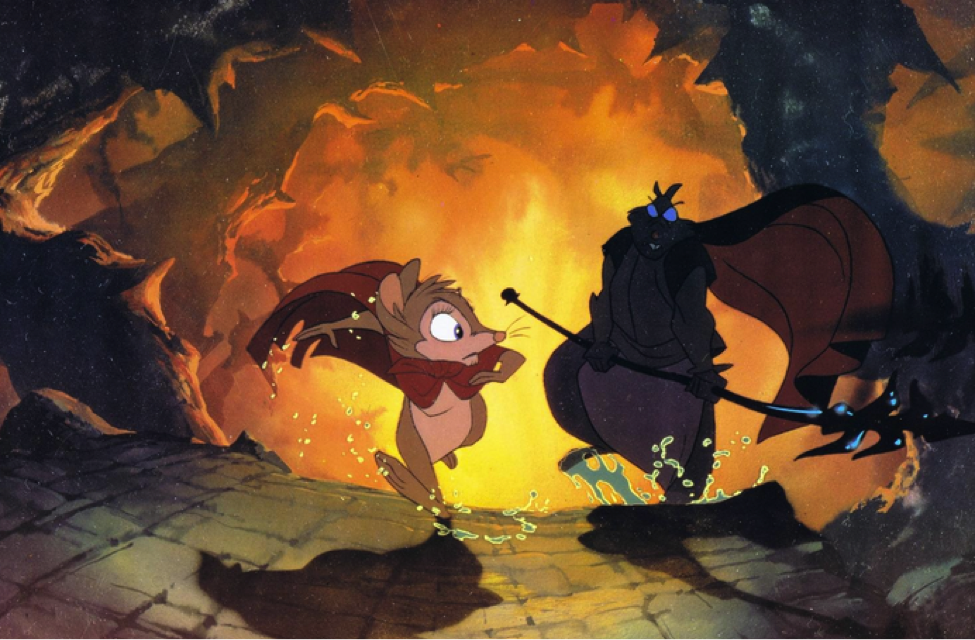 Apparently, 1982 was a prime year for traumatized kids in that it saw the opening of The Last Unicorn, Plague Dogs and The Secret of NIMH.

Directed by toon master Don Bluth, the story of Mrs. Brisby (or Frisby in the books) and her crusade to move the stone in which her family resides before the plow arrives was a lively tale filled with adventure, magic and lots and lots and lots of violence.

The most devastating moment: After the attempt to move her home was sabotaged by antagonist Jenner, crushing the film’s wise, old leader Nicodemus in the process, the stone fell into the mud. As Mrs. Brisby leans against her home and attempts to sooth the children trapped inside, she notices that the large cinder block is slowly sinking.

Mrs. Brisby begins to scream as the rats attempt to save her home and offspring, who are slowly drowning to death in the sink pit. Soon, only a few bubbles remain as the stone disappears from sight, lost in the mud.

(Spoiler: They are saved.)

The World of David the Gnome – “The Mountain of Beyond” 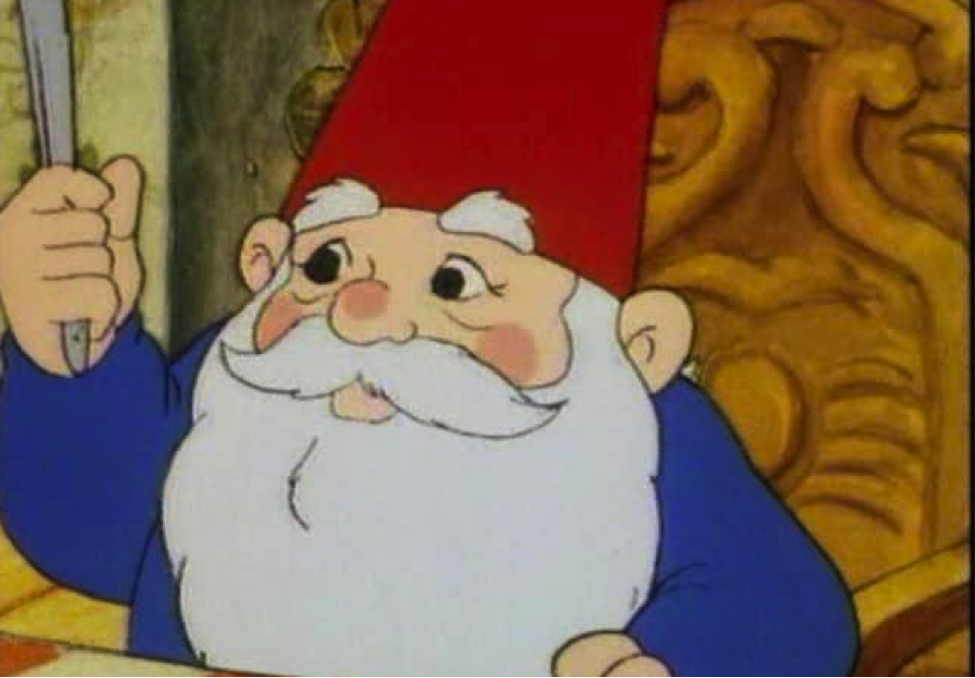 The World David the Gnome was a great cartoon for the teething sect. Voiced by America’s dad, Tom Bosley, David took the ages 4 – 8 crowd into his world, explaining how gnome clothes are made, what gnomes ate, how they built their houses, how they created pottery and other adorable mundane activities. Little did audiences realize that David would soon lead kids down a dark path in the final episode where he teaches the little tykes how gnomes die.

The most devastating moment: After 400 years of teaching kiddies about ins and outs of gnome life, David and his wife Lisa trudge up the Blue Mountains, followed by their animal buddies who have come out to say goodbye. In the final moments of the show, the spirits of the gnomes are gleefully (almost psychotically) waving goodbye to their heartbroken buddy, Swift the Fox.

Admittedly, the moment is ruined with Swift gets his flirt on with Agnes the fox, teaching kids to push back the sadness with empty hook-ups. Thanks, David!

The Adventures of Mark Twain 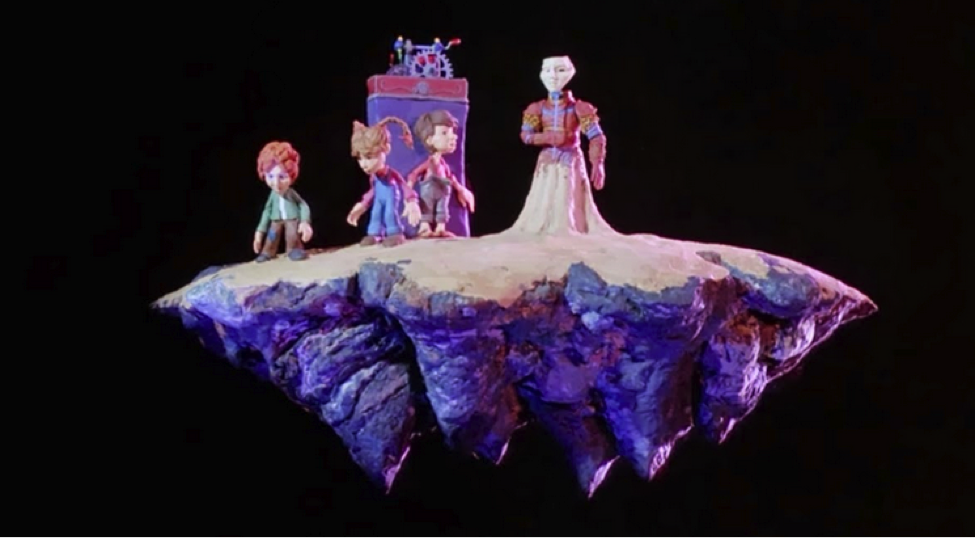 While not a cartoon, this claymation special featured all sorts of wonderfully scarring imaginary. 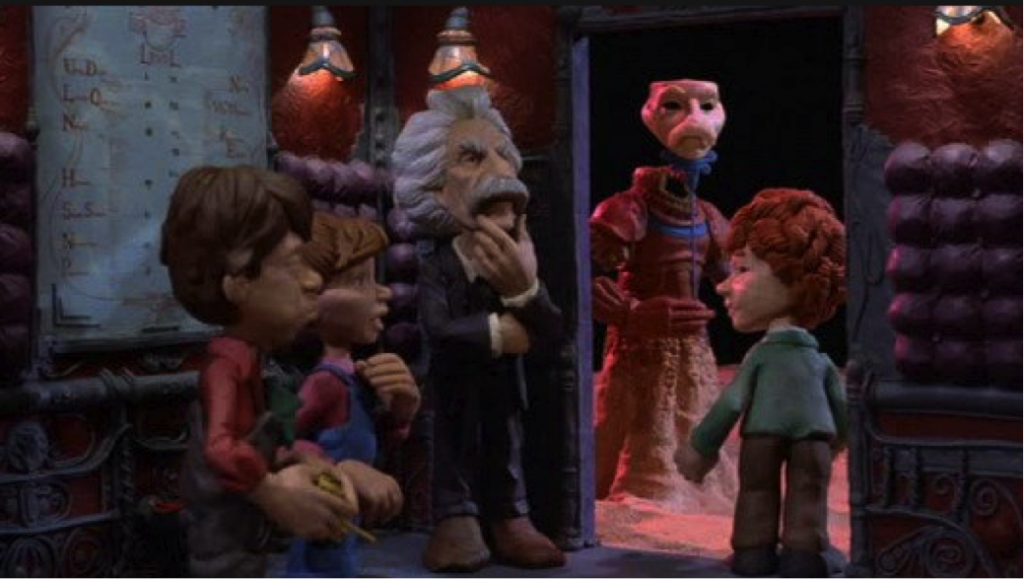