In a few months I will be 41. I’m not quite sure what that means other than the fact that somehow I have managed to survive over 4 decades on this mortal coil without being destroyed by a childhood hell-bent on murdering me. Even my mother gets a rush on my birthday, not because her precious little girl has aged into a wonderful adult (insert vomit sounds) but because her offspring is still walking around on this planet with very little help from her.

This is not a criticism by any means, I am in awe of her and her parenting skills…skills that in today’s world of psychotic over-protection would land her in jail for years.

Case in point: Ask a parent of today how they protect their young ‘uns from getting poisoned by household chemicals and medicine and you will have to suffer through a soliloquy on how they only buy holistic medicines and make their own cleaning supplies out of oranges and lemons and keep everything “toxic” in a fortified gun safe filled with things like Advil Gel Caps and Whole Milk.

Ask a parent whose kids were born in the 70s about the same thing and they will inevitably say “We had the kids put Mr. Yuk stickers on the bottles of bleach and Valium.

Yeah, “WE” were the ones to determine which cleaning products we didn’t want to die from. “We” were also handed these sheets in school and told that if we all (the collective all) wanted to live past the age of 11, we should probably stop telling our siblings that the Ajax was powdered sugar.

Did this campaign of poison awareness work?

Well, all the people I grew up with are still alive (at least the ones I am friends with on Facebook are) and to be honest, most of those stickers ended up on bedroom doors or on cans of peas and green beans rather than on the rat poison or the Windex. In fact, I don’t think my mom even made us sticker anything that would kill us, rather her educational parenting perspective was to point at the bottles under the sink and in the medicine cabinet and say “Don’t drink or eat that stuff, it will kill you and then I will have to come up with the money to bury you and I don’t feel like doing that, so don’t be an idiot”.

And we didn’t…although I will admit to drinking NyQuil straight from the bottle during my teen years just to see how long I could last before entering into a deep coma (In a small town, you kinda had to make your fun).

We were also left alone a lot. Not out of some blatant disregard for our safety, but because our parents trusted us to not fuck up in horrific ways. Sure, they knew we would most likely do something stupid (we were kids after-all) but they believed in us and our ability to take care of ourselves.

We just had to be in by dark and not be covered in blood. Those were the rules (although the blood thing was more of a suggestion than an absolute) and we followed them.

But today parents have the CPS (child protective service) called on them for allowing their kids to walk home from school alone, or leaving them in cars with the windows cracked while they run into a store to get bread. Meanwhile, once, my dad once ran out of gas in the California desert and left both my brother and me in the car WHILE HE HITCHHIKED TO THE NEAREST GAS STATION. His parenting tactic on this occasion? To put the cooler full of soda and pudding cups in the front seat, telling us to go slow on the eating and drinking and that he would be back soon…by the time he returned it was dark and the coyotes were howling and his only question about our experience was to ask if anyone tried to break into the car. Then, he slid behind the wheel, put my brother on his lap, and let the 5 year-old steer the car down a two-lane blacktop at 60 miles per hour.

And no one even blinked.

Today, my dad would be serving a twenty-year prison sentence.

But it wasn’t just society who couldn’t care less if we were in possible danger, even our toys were created for the specific purpose to Darwin those of us out of the gene pool that they deemed inappropriate.

We had Click-Clacks (a toy that was made solely to cause severe brain damage): 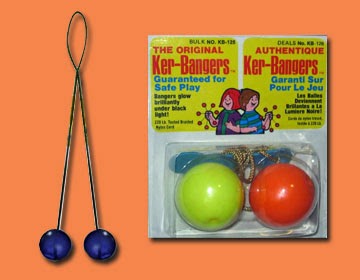 Lawn Darts that would impale you: 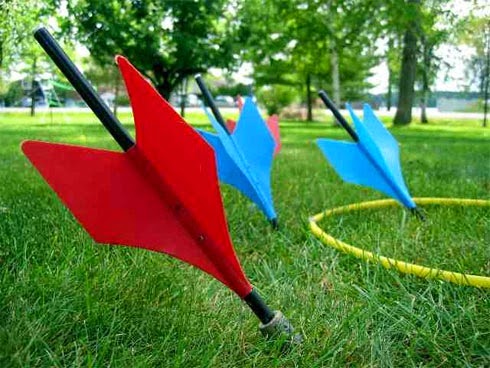 Smaller version of adult tools that could, in fact, saw yours or your sibling’s hand off: 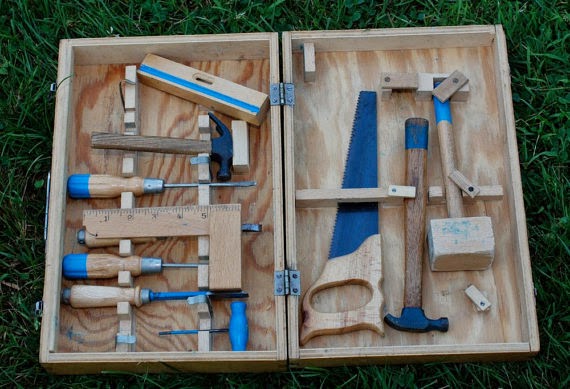 Hell, even our boardgames were interested in maiming us:

But we soldiered on, albeit scarred, and in a better position to navigate the world.

Of course, while we might not have had to live in a bubble-wrapped protective coating that today’s kids do or played with toys that were certifiably safe from lead paint or made in sweatshops by other kids, we still had a great childhood filled with wonder and imagination (we sort of had to, TV totally sucked) that made us into the people we are today.

So please, for the love of all that is kid-dom, let the little ones fall down, experience pain, be on their own and experience life for all it’s horror and joys.

And if you still think the argument that the world is far more dangerous than it has ever been is a valid one, I just want you to know that some of us had to learn about menstruation from the guy who played Mike on Breaking Bad, and trust me when I say that nothing your kids will ever experience is going to be more frightening than that:

In this article:1970s, Childhood, Nostalgia