It was only a few weeks ago we were talking about when we could be expecting a news about a solo Batman film and we’ve got our first hint via Forbes. The outlet is known for mostly financial and business stories has started getting into the world of comic book film reporting.

They are now stating the reason Joker is in Suicide Squad isn’t just to help set-up Harley Quinn’s character but also lead into a new Batman film as well. Stating his escape would eventually be tied into the next solo outing which is said to be heavily influenced by The Dark Knight Returns comic by Frank Miller.

The comic is already heavily influencing Batman v Superman: Dawn of Justice but likely won’t have all the material gobbled-up since it needs to include Superman, Lex Luthor and Wonder Woman in major roles. This could mean a lot of the Batman centric stuff could be saved for another film.

Adding that Batman is likely to make an appearance in David Ayer’s Suicide Squad to help boost that film’s connection to the rest of the DC Comics slate. The assumption being that Joker will indeed be apart of the new Batman film in a bigger way than Suicide Squad.

It’s been reported by Latino Review that Joker is less of a leading role and is more a Hannibal Lecter- like figure being more of a cameo than actually a lead. Those two roles are being filled by Will Smith’s Deadshot and Margot Robbie’s Harley Quinn.

Rick Flagg fans might be shocked to learn his role in the film is being greatly scaled back and won’t be as large as fans had expected it be.

I wouldn’t have given too much thought to this news but it’s coming from Forbes who has been getting some pretty big scoops concerning the DC Comics film franchises.

What could this film look like if it’s indeed inspired by Frank Miller’s The Dark Knight Returns comic?

First off, I don’t think we’ll be seeing the comic version of the mutants gang but I could see them being altered to become aligned with The Joker. The mutant angle was sort of used in The Dark Knight Rises with Bane’s army of mercenaries and street kids.

However, I could see them changing the punk street gang to be more linked to the Joker and Harley Quinn similar to what we saw in the Arkham games. Using the street gang aspect seems something we really haven’t see as a major factor in the recent Batman films. Having them rival other gangs and even put the fear of god into Gotham’s crime families could be interesting to explore.

Joker’s role will likely be beef-up from what is was in Returns which was just him on a murder spree after escaping at television studio. I would expect him to be a main protagonist of the film, possibly along with Margot Robbie’s Harley Quinn.

They didn’t hire Oscar winner Jared Leto to only appear in Suicide Squad with a small role, they obviously have bigger plans for the character. While I felt he could be apart of the Justice League films he’s too damn unpredictable to work with others. Placing him in a new Batman film post-Suicide Squad honestly makes the most sense to me.

I don’t expect to see an adaptation to be so slavishly connected to the source material, which was one of the biggest issues people had with Zack Snyder’s Watchmen. Basically, being a shot-for-shot copy of the comic book.

Taking true inspiration and making it’s own beast could be way to really make the film stand apart from the comic, but still have those connections to it.

It was confirmed that actress Jena Malone would be taking a role in Batman v Superman but it was never announced who she would be playing. Speculations and rumors have suggested she could be playing Carrie Kelley who is the female Robin in Returns.

Her new red hair seemed to be a bit of give-away, but does that mean she could only be playing Carrie in the film?

We know that Carrie isn’t the only redhead in DC Comics and isn’t even the most famous redhead in among the Batman characters. I’m not entirely sure it’s 100% Jena is Kelley since we’ve seen Batgirl production art making the rounds online from concept artist Jock (Dredd), so Jena playing a version of Barbara Gordon isn’t impossible either. 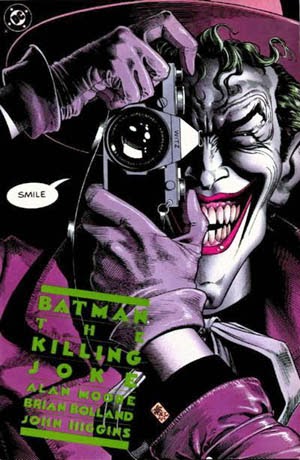 Why I think Batgirl could equally be an option for Malone is that she hasn’t been established in ages but has a strong connection to the Joker and one of his most iconic stories.

I wouldn’t be entirely shocked to see Alan Moore’s (Watchmen) Joker comic The Killing Joke being used to help increase the Joker’s story in the film.

The Dark Knight really only focused on his escape and murder spree during a television interview.

In Killing Joke, the Joker escapes Arkham to torment Jim Gordon and paralyses his daughter Barbara. After those events she becomes The Oracle an important and horrific moment for the character’s evolution.

Both Returns and Killing Joke share a similar setting of a amusement park, and could easily be combined into one single script.

It’s known that Joker famously killed Jason Todd, the second Robin who eventually returns alive as the vigilante The Red Hood. Taking the name of the Joker’s original name as his own.

Carrie Kelley is begrudgingly given the Robin mantle by Batman who is still grieving for Jason’s murder by The Joker. As it’s established in Returns that Todd has been killed.

I could also see them combining Carrie Kelley and Barbara Gordon into one character, since the former isn’t as well established as Gordon. Perhaps, taking up the Robin mantle only to move on to become Batgirl and go on her own taking cues from Nightwing.

There are many ways this movie could go since there are plenty of solid Joker stories to be used for the script. They might as well fire on all cylinders if this is indeed going to have the Joker as the baddie. We have enough unused Joker stories that could come together to give fans one badass and grim as hell take on the character. I wouldn’t even dismiss the idea of it cutting back between present day and flashback scenes.

It’s still really early at this point but if I had to take guesses at titles they could go with The Dark Knight Returns, Batman: The Killing Joke or just The Batman. Again, I still believe Warner Bros. could release the film before 2020 but it all depends on Ben Affleck.

BVS is expected to look a lot more like Watchmen visually than Man of Steel, thanks to cinematographer Larry Fong reuniting with Snyder for the film.

I know Zack Snyder is going to be a busy bee with two Justice League films about to shoot back-to-back but I’d love to see him and Larry Fong (Batman v Superman, Watchmen) take a crack at this material. Snyder has hinted for years he’d love to turn The Dark Knight Returns in a film, it could be nice to follow through with adapting the rest of the comic on screen.

I highly recommend picking up those comics along with watching the two-part animated film based on The Dark Knight Returns which is currently on Netflix.