In its ongoing hunt for anything and everything that can adapted into passable entertainment, Tinseltown has managed to turn out a handful of successful franchises that survived the journey from book to film to TV series. But not without a few sacrifices.

For every success, there are a handful of missteps that killed a once thriving and joyous property with its need for money. Because in Tinseltown, if something is a success, ride that pony until it drops dead in its tracks, then continue to whip it in hopes of getting just one more lap from the poor beast.

Blame a bad script, bad actors, a bad prime-time slot or just a bad attempt, here are few of the failed franchises the died somewhere along the line of their Hollywood journey. 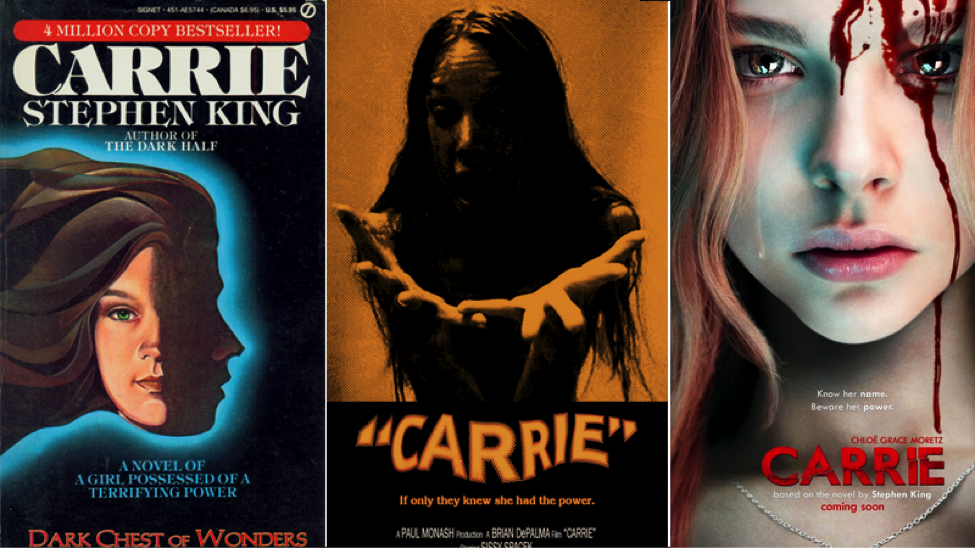 Book: Penned in 1974, the debut novel by newbie scribe Stephen King struck a chord with horror fans as the book used a mixture of interviews, first-person narrative, excerpts from fictional science journals  and courtroom transcriptions to tell the story of Carrie White. The tale of an misfit getting brutal revenge on her high school bullies resonated with anyone and everyone who ever felt on the outside looking in.

Movies: In 1976, Brian De Palma turned the tome into a masterpiece of epic proportions. Starring Sissy Spacek, Amy Irving, William Katt and John Travolta, the film perfectly encapsulated the ‘70s with its Pino Donaggio score and pitch perfect performances from its young cast.

Unfortunately, this wasn’t the only film adaptation.

Films such as Carrie 2: The Rage attempted to cash in on the success of the telekinetic teen by focusing on her recently-discovered half sister. It didn’t go over too well with fans of the original or critics.
In 2013, a remake starring Chloë Grace Moretz as Carrie and Julianne Moore as the now-beautiful uber-religious momma Margaret White hit theaters. Once again, the pic failed to resonate with fans or critics as much of the source material and heart of the story was left on the cutting room floor.

TV: Good news, everyone! In this version, Carrie lives! She fakes her death and runs off with good girl Sue Snell to Florida, where the two might have gone on Thelma and Louise-esque adventures. But alas, this version sucked also. Had the made-for-television movie been a success, this Carrie would have become a series.

Stage: In 1988, for some unforsaken reason, there was a musical of the teen angst horror movie. Just to let you know, back then it wasn’t necessary implied that any stage show with the words “A Musical” in the title was a parody like it is today. This was a glum, horrible version of Carrie without a lick of humor and awful, awful songs.

Several decades later in 2012, the play attempted a revival on Off-Broadway, with no attempt to make it campy or fun and humorous. Because history and past lessons are for jerks and should go ignored. It closed after a month.

Sex and the City

Book: Sex and the City went an untraditional route, going from book to television to movie. The anthology of New York Observer columns written by Candace Busnell first appeared on book shelves in 1997. HBO execs took notice of the collection of columns and turned it into a cable series megahit of the same name.

TV: A true snapshot of the ‘00s, the adventures of Carrie Bradshaw and her close-knit group of New York single ladies became the voice of city-dwelling single women everywhere. Love them or hate them, Sex and the City was a force of nature that would not be ignored.

Every Sunday, gals and their guy friends would gather, pour each other cocktails and watch the half-hour laffer that explored the antics of Samantha, Charlotte, Miranda and Carrie.

Will she ever get with Mr. Big? Will Samantha ever settle down? Will Charlotte find the right yuppy to settle down with?

Yeah. People had a lot of spare in the 2000s. And possible drinking problems.

Movie: In 2008, the gang got back together to help Carrie pull through another crisis after she is left at the altar by her one true love.

The original feature film outing had its moments. But while it received mixed reviews from critics, the big screen version was a huge hit with fans, making Sex and the City: The Movie the biggest comedy hit of the year.

Unfortunately, this led to a second outing, which did its best to not only turn its characters into second-rate copies of their former selves, but inject a little racism into the affair by using anti-Muslim jokes to lighten the mood.

And Back To TV: In 2013, the CW decided to try and milk the old Sex and the City cash cow by returning to the well of Carrie. The Carrie Diaries adapts the lackluster novel of the same name into a series, following a younger Bradshaw as a teen.

So, Sex and the City, but not a lot of the city and no drinking. It only lasted a season and a half.

Flowers in the Attic 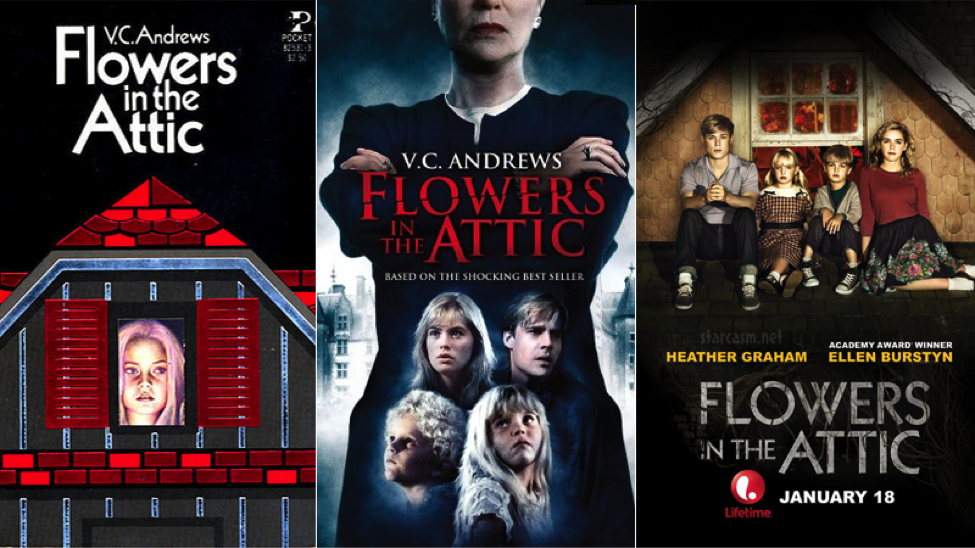 Book: Let’s just state right now that this isn’t good book. There is not teacher on this earth that would accept a VC Andrews’ novel for a book report. But that doesn’t mean it isn’t beloved.

For the last three decades, the story of Chris, Cathy, Carrie and Cory Dollanganger and their hardships of being locked in a mansion attic for three years caught the attention of every teenager with a library card.

Why? Because of the sex. Formulaic, overly-descriptive and badly written sex scenes involving incest.

A cross between Anne Frank and Jackie Collins, Cathy and Chris were forced by their mother to hide in an attic with their younger siblings in an attempt to gain an inheritance. As time went on, and with no one else to turn but each other, things got gross around year two.

However, the story of the Dollangangers caught the attention of every bad girl in school, who would immediately share their literary findings with the younger sect.

The best part was that this was a book that most girls could read in front of their parents thanks to misleading book covers. Mom and dad were proud of their little bookworm, while in truth, it creating a stir of pre-teen emotions for generations of young girls.

Movies: The 1987 movies was just like the book…but with no incest. That’s right, the movie removed what many regarded as the only redeeming factor of the book and replaced it with nonsense.

The pics did fine at the box office, disappointing scores of fans with its milquetoast adaptation of the tale. But as soon as word got out about the “necessary” edits to the tale,

TV: In 2014, Lifetime opted to try their hand at VC Andrews’ megahit page-turner. Squeezing 400-odd pages into a brisk 86-minute run time turned the tale of a teenage captives in a camp horror classic filled with brother-sister stolen kisses, a manic Rollergirl and Ellen Burstyn chomping on scenery like she hadn’t eaten in weeks.

The end result is a hot mess, but a hot mess of horrible, horrible fun, reminiscent of The Room or Miami Connection… but for disappointed chicks.

Sadly, it can’t hold a candle in campiness to its sequel, Petals on the Wind, which only included the best scenes and lacked any kind of coherent storytelling.